We continue our Presidential Geography series, a one-by-one examination of the peculiarities that drive the politics in all 50 states and the District of Columbia. Here is Hawaii, the Aloha State. FiveThirtyEight spoke with Neil Milner, a former political science professor at the University of Hawaii, and Andrew Winer, a Democratic consultant and adviser to the Senate campaign of Representative Mazie Hirono, a Democrat representing Hawaii’s Second District. Mr. Winer was also the campaign manager for Senator Daniel K. Akaka, of Hawaii, in 2006.

The Republican Party has an unusual opportunity this year in Hawaii, a state where Democratic prospects are usually as predictably sunny as the weather. But it’s not Mitt Romney’s opportunity. President Obama, who was born in Hawaii, won his home state in 2008 by 45 percentage points, his largest margin in any state. And Mr. Obama remains “an overwhelmingly popular figure here,” Mr. Winer said. 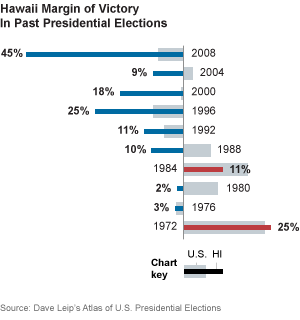 Instead, it is the Senate race in Hawaii that is seen as competitive. The Cook Political Report rates the race a tossup, as does The New York Times.

Linda Lingle, a former Republican governor, is mounting a well-financed campaign for the seat held by Democratic Senator Daniel K. Akaka, who is retiring. Ms. Lingle’s opposition will be one of the two major Democratic candidates, Mazie Hirono or Ed Case, and will be determined in their primary election on Aug. 11.

How unusual would a victory in November be by Ms. Lingle? Hawaii’s last Republican senator was one of its first two; Senator Hiram Fong served from 1959, when Hawaii joined the union, until 1977.

The Senate contest in Hawaii is a useful lens through which to view the state’s political landscape. The state is somewhere between exceedingly and overwhelmingly Democratic. The Democratic Party has controlled politics in Hawaii for the most of the state’s history.

The 2011 State of the States survey published by Gallup, which measured the partisan lean of residents, pegged the Democratic advantage in Hawaii at 28.4 percentage points, behind only the District of Columbia. The extent of Democratic dominance is embodied in the State Senate, which currently has just a single Republican. 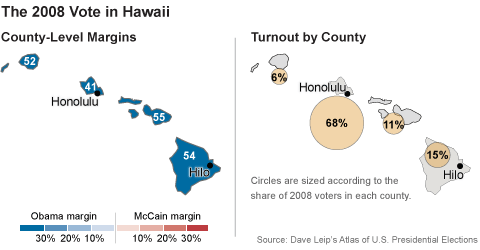 But every now and again, a Republican will win in Hawaii, including Ms. Lingle in 2002 and 2006. This is possible because in addition to being among the most Democratic states, Hawaii is also one of the most elastic states: when the political conditions are just right, independent voters are numerous enough that, along with just enough Republicans and conservative Democrats, they can combine to overcome the state’s leftward lean.

But that lean is strong. Democrats are aided by the state’s diversity; Hawaii is one of just four majority-minority states, with a large (39 percent) Asian community and a substantial Native Hawaiian population (10 percent). Hawaii’s Japanese-Americans (14 percent of the state population) are especially Democratic, Mr. Winer said, while the state’s Chinese-Americans tend to be more pro-business and Republican.1

Hawaii is also the fifth most urban state in terms of population. Ninety-two percent of Hawaii residents are in cities. More than two-thirds of voters live on the island of Oahu, mostly in Honolulu. Like all of Hawaii, the area is Democratic, but Honolulu Democrats are a bit more blue-collar, a bit less socially progressive and a bit more pro-development than Democrats on the other islands, Mr. Winer said.

Democratic voters outside of Honolulu, on the islands of Maui and Hawaii (the Big Island) particularly, tend to be more environmentally conscious and, accordingly, mostly opposed to significant development, Mr. Winer said.

The main pocket of Republican support in Hawaii is the southeast corner of Oahu, to the east of Honolulu beginning around Waialae-Kahala and Kailua, where residents tend to be more affluent.2

The Republicans generally need three ingredients to overcome the Democratic advantage in the Aloha State. First, they need lots of money. When Ms. Lingle was elected the state’s first female governor in 2002, she outspent her opponent by nearly a three-to-one margin. And so far in the 2012 campaign, Ms. Lingle has raised plenty of cash.

Also, Republicans need a strong candidate. This is more difficult than it sounds, both Mr. Milner and Mr. Winer said, because promising young politicians will usually join the Democratic Party as the most likely route to electoral success. Ms. Lingle is certainly a strong campaigner, although she is not as well-liked as she was in the 2002 campaign, or when she won re-election in 2006.

In states with a more balanced partisan makeup, money and a good candidate are often enough for victory, or at least a competitive race. But in Hawaii, a Republican will usually need something extra. “You need personality, money and some further catalyst,” Mr. Winer said, “Something has to go wrong with the Democrats.”

In 2002, when Ms. Lingle was first elected, the Democrats had plenty go wrong. Jeremy Harris, the Democratic mayor of Honolulu, was the preferred candidate to run against Ms. Lingle, and the field was kept mostly clear for him, Mr. Winer said. But after questions were raised about his fund-raising practices, Mr. Harris declined to run, leaving Democrats discombobulated. In addition, Democratic members of the Honolulu City Council had been convicted of taking bribes and misusing campaign funds. And a state senator pleaded guilty on tax evasion and campaign-finance abuse charges.

Because over two-thirds of voters usually cast their ballots in Honolulu County, it is almost guaranteed to be a decent barometer of the statewide vote. Since the 2000 election, the Honolulu County vote has consistently been just a few percentage points more Republican-leaning than the state as a whole.

The current FiveThirtyEight forecast gives Mr. Romney a 0 percent chance of winning Hawaii. Even if Mr. Obama were from another state, he would still be a prohibitive favorite. But as a native son, Mr. Obama will likely win around 70 percent of the vote again. Perhaps only the District of Columbia is more assured of voting for him.

Mr. Obama’s coattails will likely hurt Ms. Lingle, unless she can persuade a significant number of voters to split their ballots. FiveThirtyEight’s official Senate projections are coming soon, but at the end of 2011 we published “Senate Odds Guesstimates,” and guesstimated Ms. Lingle’s electoral chances at 25 percent. That seemed about right to both Mr. Milner and Mr. Winer.

Although a few partisan polls have shown a close race, or even Ms. Lingle leading, the last nonpartisan poll of the contest, conducted in mid-July by Ward Research for The Honolulu Star-Advertiser and Hawaii News Now, found the two top Democrats, Ms. Hirono (the congresswoman) and Mr. Case (a former congressman), trouncing Ms. Lingle by nearly 20 percentage points.3

If Ms. Lingle does win, however, there could be a big reward for her: many decades in the Senate. Hawaii voters are often more deferential to incumbents than voters in other states. In 2004, when President George W. Bush was seeking re-election, Hawaii looked competitive enough that Vice President Dick Cheney flew 3,225 miles to campaign there just days before the election. The tendency to give incumbents the benefit of the doubt — whether as a patriotic by-product of the large military presence in Hawaii or evidence of the state’s many Japanese-American voters4 — is one reason that Hawaii has had just five senators in its 53-year history as a state. And of those five senators, none were ousted at the ballot box; four retired and one died.

1: Neat ethnic categories tell only some of the story in Hawaii. Nearly one in four Hawaii residents identify as two or more races, a proportion higher than any other state and exemplified by Mr. Obama, a child of a white mother and a black father.

2: It was in this area, at Sandy Beach Park, where Mr. Obama was photographed bodysurfing during the 2008 campaign.

3: Ms. Hirono and Mr. Case will face off in the Democratic primary Aug. 11.

4: Deference to incumbents has also been observed in Japanese elections. The Liberal Democratic Party in Japan ruled with few interruptions from 1955 to 2009.