It was Game One of the American League Championship Series, and Cleveland Indians ace Corey Kluber was cruising against the Toronto Blue Jays. He’d allowed no runs while striking out six through six and a third innings, and — having thrown only 100 pitches — he seemed ready to keep shutting down the Jays’ bats. But Cleveland manager Terry Francona took him out of the ballgame anyway.

During the regular season, a scene like this would be unusual: Kluber exceeded 100 pitches in 19 of his 32 regular season appearances, and on the 13 occasions he didn’t, it was almost always accompanied by a handful of runs scored against him. But this month, Francona’s quick hook has become the norm. Managers during the 2016 postseason are pulling their starters earlier than ever, despite those starters allowing an ordinary number of runs.

In the early days of baseball, starters went nine innings. Then reliever usage started its slow, insidious creep, taking over baseball and bringing with it countless interminable pitching changes. By the 2016 regular season, starters were ceding more innings to relievers than ever, and the same pattern has carried over into October — but to an even greater degree. 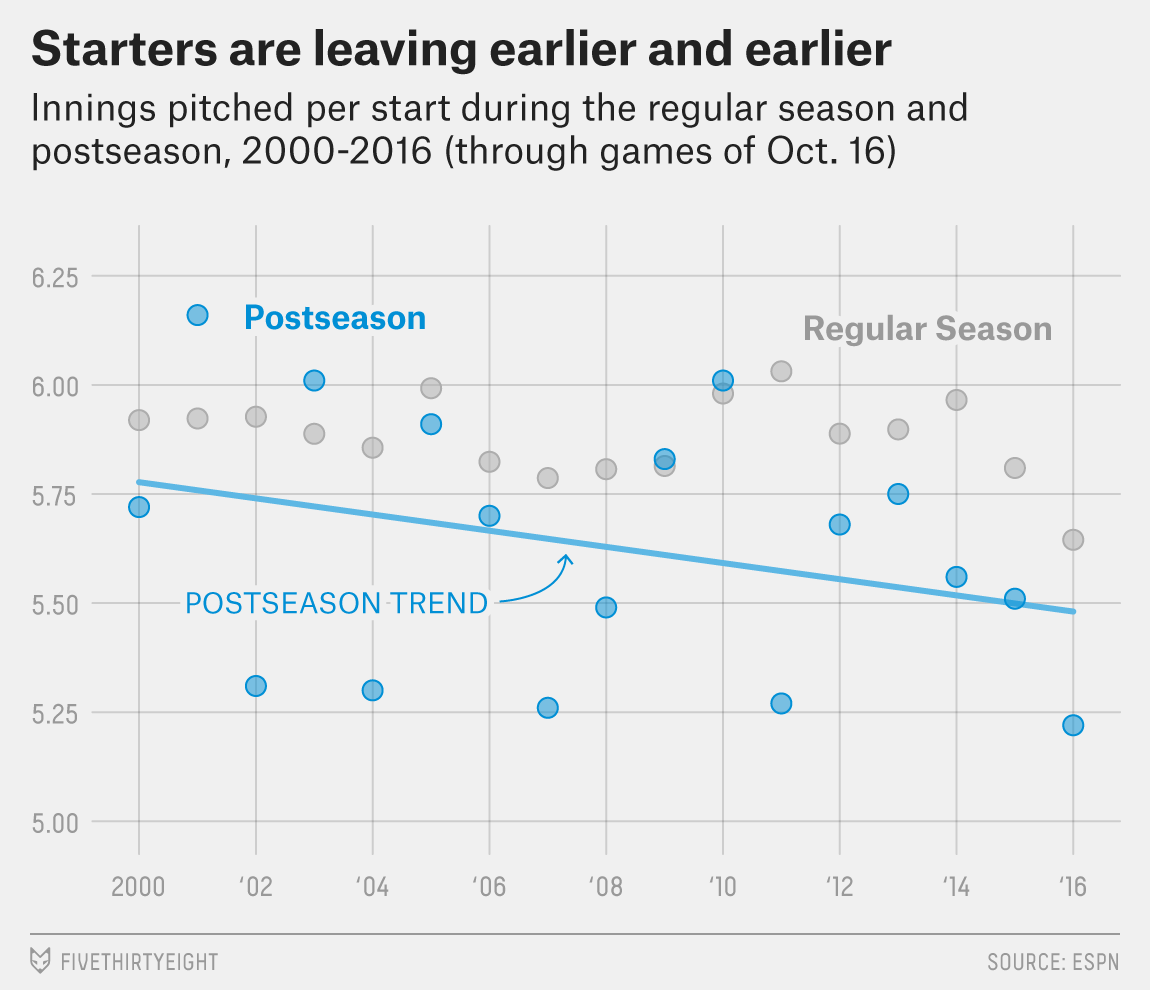 In the postseason, innings pitched per start is currently at its lowest level since 2000.1 2016’s mark is down almost a full third of an inning from 2015, which was itself a below-average year. That decrease was even larger than the decline in innings per start between the 2015 and 2016 regular seasons.

Postseason-wide innings per start has seesawed nearly as low as its 2016 level in previous years. But in every one of those years, there was a reason for pulling the starters early: They posted a 4.98 ERA. By contrast, this year’s starters are allowing only a 4.36 ERA. For starters to be removed so rapidly despite performing so well is unprecedented in the past 15 years.2

By giving starters fewer and fewer pitches, managers are obeying a sabermetric maxim. As starters go deeper into games, their effectiveness declines rapidly due to both fatigue and hitters’ increasing familiarity with their repertoire. As a result, an ace can become merely an average pitcher by his third trip through the order, and downright poor by his fourth. Even when a starter is cruising along, the odds are good that by his fourth turn through the lineup, a mediocre reliever would be more likely to get outs.

Managers used to resist pulling starters until they ran into trouble. But now they’re taking a cue from the analytics, calling the bullpen even before starters begin to give up runs. Innings that used to be pitched by fading starters are now handed to fresh, flame-throwing relievers.

But is this shift to the bullpen working? No — or at least, not that we can see.

Another place reliever usage might alter the game is in terms of preventing comebacks. Going to the bullpen while the starter is cruising is an even tougher sell when you have a lead, but sabermetrics suggests it’s the best way to preserve that lead. Through 24 playoff games3, there have been two comeback wins after six innings — close to the regular-season average of 13.6 percent. Similarly, if managers were acquiring leads and then unleashing a cavalcade of relievers to prevent offense, we’d expect there to be less movement in win probability. But the 2016 postseason has featured an average win probability change almost exactly in line with those of previous Octobers.

By design, October is a small sample of baseball, and just about anything can happen. Managers could pursue the best tactics for the whole postseason and still not necessarily affect the league’s offensive statistics, as we’re seeing. But the playoffs are also a preview of new strategies for the coming year, as teams invariably copy the blueprints of high-achieving playoff teams. So if history is any guide, we can expect next season to feature even shorter starting pitcher outings and ever more relievers, even if it hasn’t made much of a tangible impact yet.