In a column on Friday, the Wall Street Journal’s Kimberly Strassel asserted that Democrats — not Republicans — are more at risk of harming themselves with ideologically-driven primary challanges:

What do Joe Sestak, Bill Halter and Colleen Hanabusa have in common? The left loves them. This is yet another reason Democrats are in trouble this fall.

Given the obsessive coverage of the Republican “civil war,” you may not realize Democrats are also feuding.[…]

While some Republican primaries are proving bloody, most are turning out candidates largely in tune with today’s public frustration with Washington.

The Democratic primaries, by contrast, are generating nominees who are embracing, or even going beyond, the president’s unpopular agenda. This is the feud that may have the bigger consequences for this fall’s midterms.

Although Strassel’s position is well-argued, it isn’t really supported by the evidence**. If she had consulted the polling, she’d learn that, while insurgent Republican candidates are generally polling worse than their establishment counterparts, the same is not usually the case for Democrats.

Let’s first look at the Republicans. In almost every place where there’s a competitive Republican primary for the U.S. Senate, we can fairly clearly identify one or more establishment candidates (who are generally more moderate), and one or more insurgent candidates (who are generally more conservative). What’s interesting is that, in every single case, the establishment candidates are polling better than the insurgents when one takes a simple average of the last five general election polls: 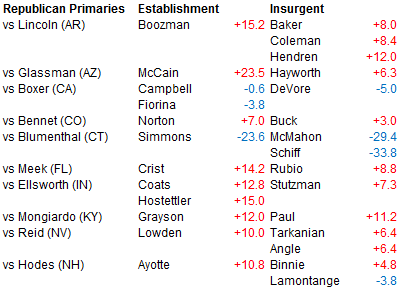 There are a lot of reasons for this. The establishment candidates (by virtue of being in the establishment) generally have better name recognition, an advantage which might fade over time. And polls may not do a good job of capturing the superior base enthusiasm that the insurgent candidates could conceivably generate, insofar as it might translate into a more spirited general election campaign.

Still, Strassel has little basis to claim that “Republican primaries are turning out candidates largely in tune with today’s public frustration with Washington.” In fact, the more populist, “insurgent”, or conservative the Republican candidate tends to be, the worse his or her general election standing, at least for the moment.

In Democratic races like Ohio and Kentucky, it is somewhat harder to draw a distinction between establishment and insurgent candidates. But in three cases the choice is reasonably clear: these are in Colorado, Arkansas, and Pennsylvania, where an incumbent Senator is being challenged. And in each case, it’s the insurgent (non-incumbent) candidate who has the superior general election polling:

We should be careful, however, about generalizing these findings. Arlen Specter and Blanche Lincoln have become quite unpopular, but this may have as much to do with their incumbency status as their ideological orientation. In WV-1, another Democratic incumbent, Alan Mollohan, lost his primary last week to a more conservative challenger, Mike Oliverio.

In Kentucky and North Carolina, there are no incumbents, but the more liberal Democrat has the better general election polling. On the other hand, there is HI-1, where neither the liberal Colleen Hanabusa nor the moderate Ed Case have been willing to leave the race, which could concede the election to Republican Charles Djou. A January poll by Mason-Dixon found the moderate Case faring significantly better than Hanabusa in a hypothetical one-on-one matchup against Djou.

One place where a Democratic insurgent candidate would unambiguously imperil the Democrats’ general election chances is in UT-2, where the very liberal Claudia Wright has forced a primary against the very moderate incumbent Jim Matheson after receiving 45 percent of the vote at the state nominating convention. Whereas most forecasters regard UT-2 as a likely or safe Democratic hold if Matheson is the nominee, Wright’s agenda is probably untenable in a R+15 district.

But Wright is unlikely to win the primary, which will feature a more diverse and more moderate set of voters than the activist-dominated convention did. And in fact, this raises an important point. By virtue of being more pluralistic, the Democratic primary electorate is less likely to nominate a candidate who isn’t viable in the general election.

The primary challenges in Arkansas and Pennsylvnaia have been championed by what can broadly be thought of as the online activist left. These are an important set of voters, who often donate their time and money in addition their votes. But they aren’t numerous enough to sway a primary election unless they also have the support of some other parts of the Democratic coalition.

The online activist left (in addition to being liberal) tends to be very educated, and relatively white. Here, according to Quantcast, are the traffic statistics for four prominent websites that have explicitly involved themselves in the Pennsylvania and Arkansas challenges:

On average, 86 percent of the readers of these sites are white, and 76 percent are college-educated. (For the record, FiveThirtyEight.com’s traffic statistics are similar.) By contrast, in the broader the Democratic primary electorate (as of 2008), just 63 percent of voters were white, and 48 percent were college-educated. Also, just 48 percent of the Democratic primary voters self-identified as liberal, versus 39 percent moderate and 12 percent conservative.

What share of the Democratic primary electorate consists of white, college-educated liberals (the bulk of the netroots audience)? If you do the math, you get:

That is, about 15 percent. This calculation isn’t perfect, since it assumes that these three characteristics (race, ideology, education) are independent of one another when they are in fact somewhat correlated. Also, the Democratic primary electorate may be whiter in a race where Barack Obama isn’t running. But something in the 15-20 percent range is probably in the ballpark.

Swaying 15-20 percent of the electorate isn’t nothing, but it isn’t enough to win elections all by itself. If you pair the white liberal activist vote with something else — the African-American vote, or the Hispanic vote, or the youth vote, or the union vote, or the centrist anti-incumbent pox-on-both-their-houses vote, or the moderate libertarian-ish vote — then it may well make the difference in formulating a 50% + 1 coalition. But a Democratic candidate generally has to be endorsed by at least two, and usually three or more, distinct subgroups within the Democratic coalition in order to be nominated. In fact, this is something close to a mathematical axiom, since in most states and districts, no one part of the Democratic coalition makes up more than about a quarter of the primary voters.

In fact, this is probably quite helpful to Democrats. It ensures that every candidate they nominate has at least some ability to appeal to different groups of voters. Sometimes one of these groups will be white liberal activists and sometimes it won’t be.

Conservative activists, like their Democratic counterparts, are mostly white (91 percent of the traffic at RedState.com is Caucasian). But white conservatives also make up an outright majority, or a very large plurality, of the Republican primary electorate in most states. (At least at the moment, Republican-identifying conservatives are generally less fractured along things like income and educational lines.) Thus, a Republican candidate can frequently win the primary simply by appealing to this one, dominant coalition, and the sentiment of the activist base is more likely to both reflect and influence this majoritarian opinion. However, these Republican candidates may be less well-equipped to deal with the more diverse electorates they will face in November.

A great deal of American politics derives from the fact that the Democratic base is pluralistic (but therefore sometimes incohesive), whereas the Republican one is more homogenous (but therefore sometimes overly narrow). The Republicans’ cohesiveness has helped to reinforce their enthusiasm, and they are likely to have an excellent November. However, they could conceivably cost themselves 1-3 Senate seats, and 5-10 House seats, by nominating suboptimal (electorally speaking) candidates. By contrast, the effects of Democratic primary challenges are more ambiguous, and may be as much of a help to the party as a hindrance.

** Strassel also asserted that the public option was “highly unpopular with the general public”; in fact, polls consistently showed it to be popular.