Democrats are understandably thrilled about a USA Today/Gallup poll that came out a few hours ago and which shows a fairly sizable 49 percent plurality in favor of their health care bills, against 40 percent opposed. The +9 net score in the poll, conducted in its entirety yesterday after the House passed its health care bill, is the best observed in any individual health care poll since October.

If I were a Republican, then I’m sure I’d have a little pang of fear right now. Any scenario in which health care reform actually turns out to be somewhat popular is an utter nightmare for them: they’ll have conceded a huge policy victory to the Democrats without improving their situation at the ballot box. Even the best case scenarios for Democrats, mind you, are not exactly great: perhaps a loss of 15-20 seats in the House and 2-4 in the Senate — about what a party usually loses at its first midterm. (I don’t think Democrats can do much better than that unless there’s also an unexpectedly robust recovery in the employment picture.) But it sure wouldn’t feel very good for Republicans, especially if the emergent narratives were that (i) the Republicans can get only so far with a strategy of obstructionism and (ii) Democrats benefit when they band together to pass major agenda items.

But — hold your horses. This is just one poll, and even if the bounce is real, it may very well evaporate. Let’s first put the Gallup results into a little bit more context, and then consider how likely the bounce is to stick.

Gallup’s poll shows 79 percent of Democrats, 46 percent of independents and 14 percent of Republicans saying that passage of the health care proposal was a “good thing”. In comparison to an average of other polls since Scott Brown’s election that provided a partisan ID breakdown, these reflect considerably improved numbers among both Democrats and independents but hardly any gain among Republicans: 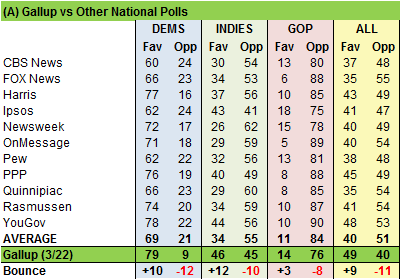 What about in comparison to other Gallup polls, however? Gallup has generally shown relatively good numbers for the Democrats on health care — their most recent poll on March 7th showed 45 percent in favor and 48 percent opposed. Unfortunately, this doesn’t make for an apples-to-apples comparison either, since Gallup has changed their question wording: instead of their previous methodology, in which they asked whether the respondent was more likely or less likely to vote for a Congressman who supported health care reform, their newest poll simply asks whether the bills were a good idea or not.

Gallup’s new phrasing is actually a little bit closer to that employed by most other pollsters — nevertheless, house effects can result from many things other than question wording (such as construction of the sample), so a comparison to past Gallup polling is worthwhile as well. Here, we see a bounce that is somewhat smaller and a little bit lopsided — the number of people in support of health care reform increased by just 3 percent as compared with an average of Gallup’s five most recent polls, but the number opposed decreased by 8.

Again, however, none of this really matters unless some of the bounce actually sticks. It’s not unusual for a candidate or cause to see its numbers improve after it wins a couple of high-stakes news cycles — but the bounce usually evaporates after a couple of weeks.

In this case, however, I think the bounce would have some chance of sticking:

1. Some of the opposition to health care reform, as we’ve emphasized repeatedly, came from the left. But these people didn’t necessarily prefer the status quo — they were holding out for single-payer, a bill with a public option, or some other more “radical” alternative. Now that those grass-is-greener alternatives are essentially off the table, however, and now that they’ve seen Democrats really go to bat and take a risk to achieve one of their long-term goals, they might be brought back into the fold.

2. Some of the objections to health care may have stemmed from process rather than the contents of the bill itself. Now that the process part is basically over, with the climax coming from a relatively straightfoward up-and-down vote in the House, those negative optics may be minimized. Democrats were wise not to have used the deem-and-pass strategy (and stupid to have thought about it for more than 5 minutes), and a bit fortunate that the climactic nature of the House vote will take attention away from the Senate, where the reconciliation process could be much messier. Either way, while the cross-party fighting over health care reform has just begun, the Democrats’ internecine wars are mostly over, and most stakeholders in the party will be fully on board for the remainder of the year with selling the bill to the public — rather than being circumspect as they try to stake out a negotiating position.

3. Lastly, now that a bill has actually been passed, there is less ambiguity about its contents. Voters may have been justified not to give the bill the benefit of the doubt so long as there were several different versions of reform floating around.

ON THE OTHER HAND, the Gallup poll also detected a fairly positive emotional reaction to passage of the bill — and some of that will fade. I don’t think the Republicans did a very good job of making their case on Sunday night: their bellicose rhetoric, compelling in the context of a tea party or stump speech, looked out of place on the House floor. Nor were they helped by the very small minority of protesters outside the Capitol who behaved like imbeciles. But most of that stuff will be forgotten about in a couple of weeks.

Here’s my best guess: I think most of the bounce among Democrats will actually stick, but that most of the bounce among independents (and Republicans) will fade. If, for example, we take the average of the Gallup bounces as determined from the two methodologies outlined above, then wipe out one-third of it among Democrats and two-thirds of it among Republicans and indies, and then append it to the pre-passage Pollster.com average, we show the numbers eventually settling in at 45-47: about an even split.

But — we will see. Although it will be interesting to see whether other polls show a bounce of a similar magnitude to Gallup (the only other post-passage poll out so far is from Utah — it actually does show a slight bounce), the only thing that really matters is what the numbers will look like in November.

EDIT: There’s also a Bloomberg poll out that shows pretty much the same ol’ numbers — 38 percent support, 50 percent opposed, but 3/4 of the interviews were conducted before passage of the bill. Just be patient guys: I’m sure there will be plenty of polling out later this week.

EDIT x2: Just to be clear: there certainly is some chance that the Gallup poll will prove to be a mild outlier — I don’t want to undersell that possibility too much, especially since the Gallup poll was in the field for just one day — although the Bloomberg poll doesn’t really provide much evidence either way. Probably going to take about a week before we really know whether there was a bounce or not, especially since the bounce could have several different potential triggers — e.g. the vote itself versus the signing ceremony, etc.