Stealing signs has been part of baseball since signs existed. The spycraft is generally accepted so long as the efforts are not aided electronically. Yet as early as 1900, there were technology-aided attempts to steal signs. The 1951 New York Giants used a telescope and an electrical buzzer to relay opposing catchers’ pitch calls in games at the Polo Grounds. In 2017, the Boston Red Sox were fined for using Apple Watches as part of an in-game reconnaissance scheme.

Earlier this month, major league pitcher Mike Fiers blew the whistle on his former club, telling The Athletic that the Houston Astros stole signs in 2017, a season in which they won the World Series. Fiers said the team monitored opposing catchers’ signs from an outfield camera, which was linked to a monitor in a hallway near the home dugout. There, a hidden Astros staffer allegedly alerted hitters to certain pitch types by banging on a trash can. MLB is investigating.

Bregman down 0-2. gets two offspeed pitches that come with the bang. spits on the first. homers on the second. pic.twitter.com/pM6i0UKgGH

The Astros have also been accused of whistling to convey pitch information; during a game on Sept. 3, 2017, in which suspicious thumping could be heard, there was also whistling in advance of some pitches, including on a Cameron Maybin home run.

But if the Astros did use video to steal signs, how effective could such a practice be for the club? If there was an advantage, and it was consistently executed throughout the season, can we measure some effect? Perhaps we can.

If you know what pitch is coming, you’re less likely to miss it and also more likely to drive it. So FiveThirtyEight examined the change in strikeout rate and isolated power for all 30 MLB teams between the 2016 and 2017 seasons. The use of those two metrics would also help us evaluate whether teams were perhaps trading contact for power or vice versa. But we also needed to look specifically at home and road games, since Minute Maid Park was where the Astros allegedly used their sign-stealing scheme. There, the Astros were an outlier in 2017. 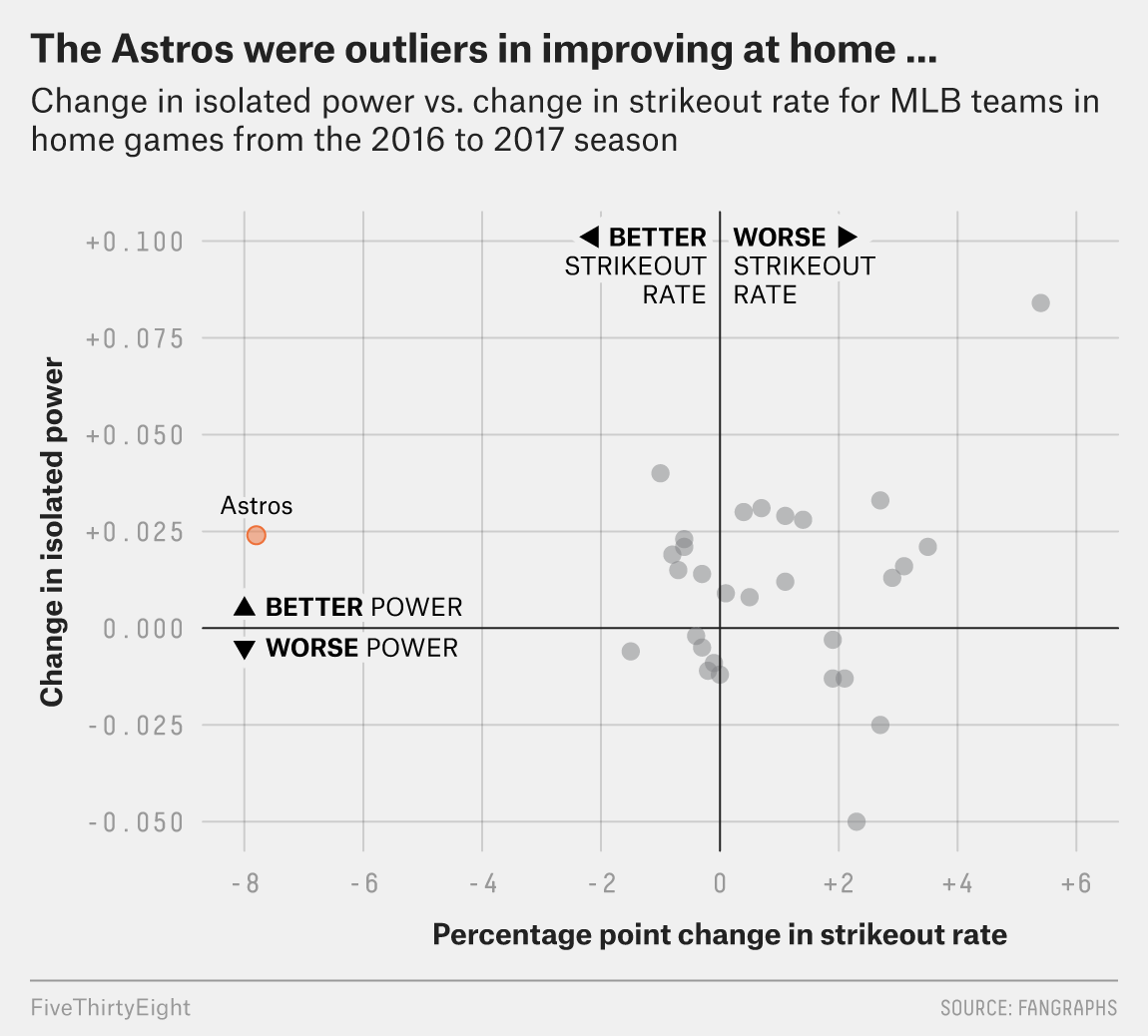 But what complicates matters is that the Astros also improved away from home in 2017. 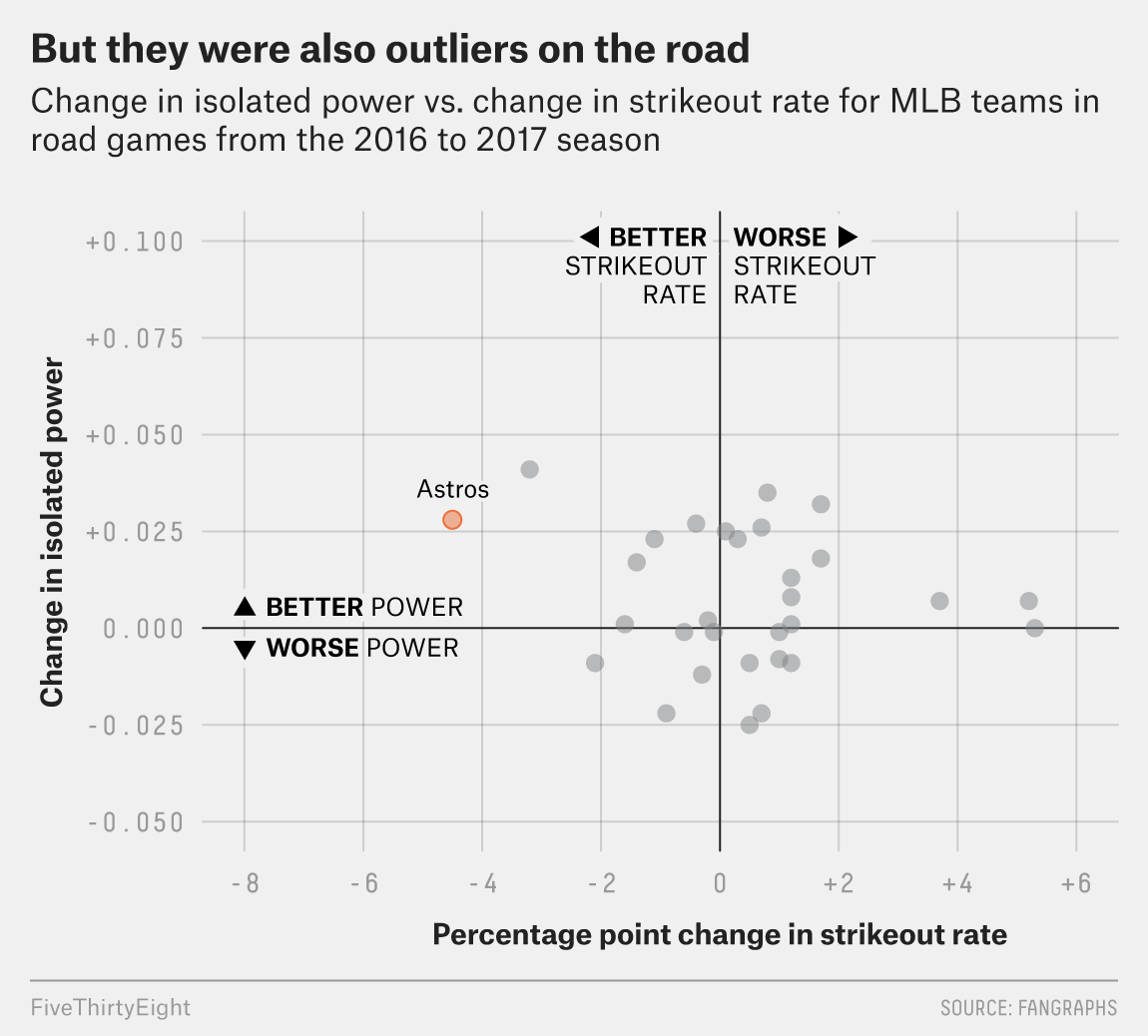 While it’s possible that the Astros’ alleged sign-stealing scheme, or a modified version, traveled with them, improving plate discipline was a focus of team management when it came to hiring hitting instructors throughout their organization. The Astros might just have had really good instructors and talented players.

Or perhaps they had really good instructors, talented players and shortcuts.

Astros rivals have been concerned about the potential of a sophisticated reconnaissance operation. In the World Series, the Washington Nationals went to extraordinary lengths to prevent their signs from being stolen, with pitchers and catchers employing laminated cards, like quarterback wristbands, to signal in five sets of signs for each pitcher.

The Astros have maintained their performance gains since the end of the 2017 season. In that time, Houston has enjoyed the lowest strikeout rate in baseball and the third-best slugging mark. That efficiency helped them to the most productive lineup since the Murderer’s Row Yankees. Maybe they are that good, but they may have also had some help along the way.