Tuesday was the 40th anniversary of Hank Aaron’s record-breaking 715th home run. Aaron extended his record to 755 home runs, and his record was eventually eclipsed by Barry Bonds in 2007.

I was struck by Joe Posnanski’s reflection on Aaron: The degree to which Aaron’s reputation is associated with the home-run record in some ways does him an injustice. You can think of this post as the nerdier younger brother of Posnanski’s column.

What if Aaron had never hit a home run? What if those 755 round-trippers had fallen for base hits instead? (If we’re trying to isolate the effect of his power, that seems like the fairer way to do it, instead of turning them into popups or something.) Would he still be a Hall of Famer?

If all of his homers had been singles, Aaron would still have his 3,771 hits. Instead of being the second-best home-run hitter of all time, he’d be the third-best singles hitter of all time, after Ty Cobb and Pete Rose. His RBI total would have gone way down; based on the number of runs that Aaron knocked in on home runs and singles throughout his career, I estimate that he’d have 1,232 of them rather than 2,297. But 1,232 isn’t a shabby total; it would rank Aaron 141st all time, in the general vicinity of Derek Jeter, Edgar Martinez and George Sisler. He’d still be a lifetime .305 hitter and have a .374 on-base average.

We can also consider Aaron’s wins above replacement (WAR) and how much of it was produced by home runs. On average, a home run is worth .93 runs more than a single. And according to FanGraphs, each run that Aaron produced above was worth about .11 wins to his team (.1077 if we want more precision). So we can figure out how many wins Aaron created with his home runs by multiplying 755 by .93 by .1077. The calculation comes out to 75.6 WAR. Aaron produced a total of 136.3 WAR, according to FanGraphs. So those home runs, worth 75.6 WAR, represented about 55 percent of his career value.

But Aaron still has 60.7 WAR left over. That’s quite good: Aaron’s revised WAR would rank him 44th among outfielders all time, and there are 67 outfielders in the Hall of Fame (not counting Aaron). Aaron’s WAR without his home runs is comparable to what players like Duke Snider, Kenny Lofton, Willie Stargell, Carlos Beltran, “Shoeless” Joe Jackson, Dave Winfield, Andre Dawson and Richie Ashburn produced with their home runs. A few outfielders with a WAR of about 60 aren’t in the Hall of Fame (Sherry Magee didn’t make it, for example, and Lofton probably won’t get in). But Aaron would seem like a safe bet with his gaudy career-hit total.

I also ran these numbers for the other members of the 500 home-run club. How many of them would have a Hall of Fame case without their home runs? 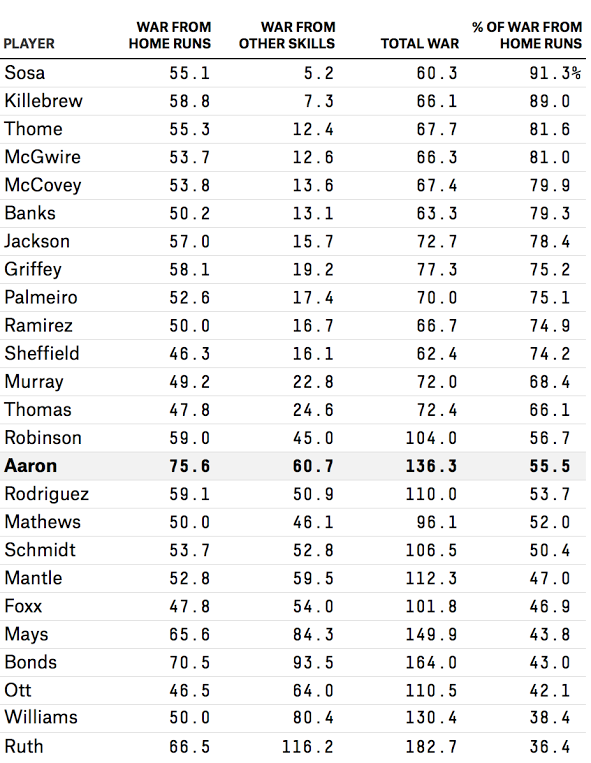 Babe Ruth, Ted Williams, Willie Mays and Barry Bonds (issues with performance-enhancing drugs notwithstanding) would still be slam dunks. A homerless Mel Ott and Mickey Mantle would rate about the same as a homerless Aaron and would probably get in. Jimmie Foxx, Mike Schmidt and Alex Rodriguez would be tough calls. Eddie Mathews and Frank Robinson would probably fall just short. The other 13 members of the 500 home-run club would have no chance.