An urban legend in the airline industry claims that the former CEO of American Airlines, Bob Crandall, once saved his company $100,000 a year by calling for the removal of a single olive from every in-flight salad.1 As the story goes, some of these savings came from lower fuel burn thanks to fewer olives, and thus a lighter load on each flight in the American network.

This story is particularly relevant today, as fuel prices are near historic highs and airline executives are searching for every possible way to cut costs. Take Southwest Airlines. Have you ever noticed that the airline doesn’t offer typical in-flight entertainment systems? Outside the costs of buying, installing and maintaining those small TV screens in airplane seats, entertainment systems also weigh about 7 pounds each and cause airplanes to burn more fuel. As Rob Fyfe, the former CEO of Air New Zealand said in 2013, “There is an enormous economic incentive to reduce the weight of the systems.”

All of this got us wondering: Just how much fuel could an airline save by shaving excess weight from a flight? We decided to use an aircraft performance model developed at the Massachusetts Institute of Technology to find out.2

Because new airliner sticker prices range from tens to hundreds of millions of dollars,3 operators try to control fuel costs by flying their existing airplanes as efficiently as possible. And weight is an important factor. All else being equal, a lighter airplane will always be more fuel-efficient than a heavier one. This is easy to understand for large weights; if you load up the cargo hold with bricks, the engines will need to work harder. But the concept is equally valid for smaller weights. Bringing a laptop on your next flight may help you pass the time, but it will also make the airplane slightly heavier and the engines work ever so slightly harder.

Our analysis takes into account the distance of a flight, the weight carried onboard the aircraft, and the aircraft type itself. It then simulates every phase of the flight, from departure gate to arrival gate, in order to determine the fuel consumed at each moment along the flight path. To get an idea of how adding small amounts of weight can affect fuel burn on a typical flight, we analyzed a flight from Boston to Denver operated by a Boeing 737-700. Southwest Airlines operates this service three times per day.

According to our model, the total cost of fuel for operating this flight with 122 passengers (85 percent of the maximum seating-capacity)4 is about $7,900.5 Each marginal pound6 onboard the aircraft for this flight will result in a marginal fuel cost of a little less than 5 cents.7 So if every passenger remembered to go to the bathroom before boarding, shedding an average of 0.2 liters of urine, the airline would save $2.66 in fuel on this flight alone. Such tactics are not off limits. Ryanair famously contemplated charging customers to use the bathroom (in an effort to reduce the number of on-board bathrooms and pack on more seats). Company spokesman Stephen McNamara said in 2010, “By charging for the toilets we are hoping to change passenger behavior so that they use the bathroom before or after the flight.”

The cost savings here are a tiny fraction of the total cost of fuel for the flight because airplanes themselves are heavy machines.8 Even if the flight operated with no passengers or bags, the aircraft would still consume $6,600 worth of fuel to get from Boston to Denver. This reveals an interesting fact: If an airline wanted to save money by reducing weight on this flight, the largest possible savings would be $1,300. And that would require kicking everyone and everything off the airplane. In short, once an airline has decided to service a route, it can only control a small part of the total fuel consumption through weight reduction.9

But that doesn’t mean airlines should write off weight reductions as a way to save money and reduce fuel consumption. When we are only talking about one flight, the savings don’t seem very compelling. But to determine the relevance of weight savings, we need to understand the enormous scale and razor-thin profit margins of airline transportation networks.

When you are sitting in a specific airplane, it’s easy to forget that there’s a hornet’s nest worth of other flights airborne at the same moment. On average, there’s a Southwest jet taking off every 24 seconds, day after day, without pause. To get a sense of scale, we created a video showing a typical day in the Southwest network.

It’s this immense scale that can enable big savings from small weight changes. To find just how large the savings can be, we extended our simulation to each of the approximately 1.6 million flights operated by Southwest Airlines in 2013.10 The exact amount of money saved on each flight depends on the aircraft type and distance flown. In our analysis, we calculate fuel savings for each flight independently to match the actual flight schedule.11

Here are the potential cost savings at Southwest Airlines from making small weight changes on every flight: 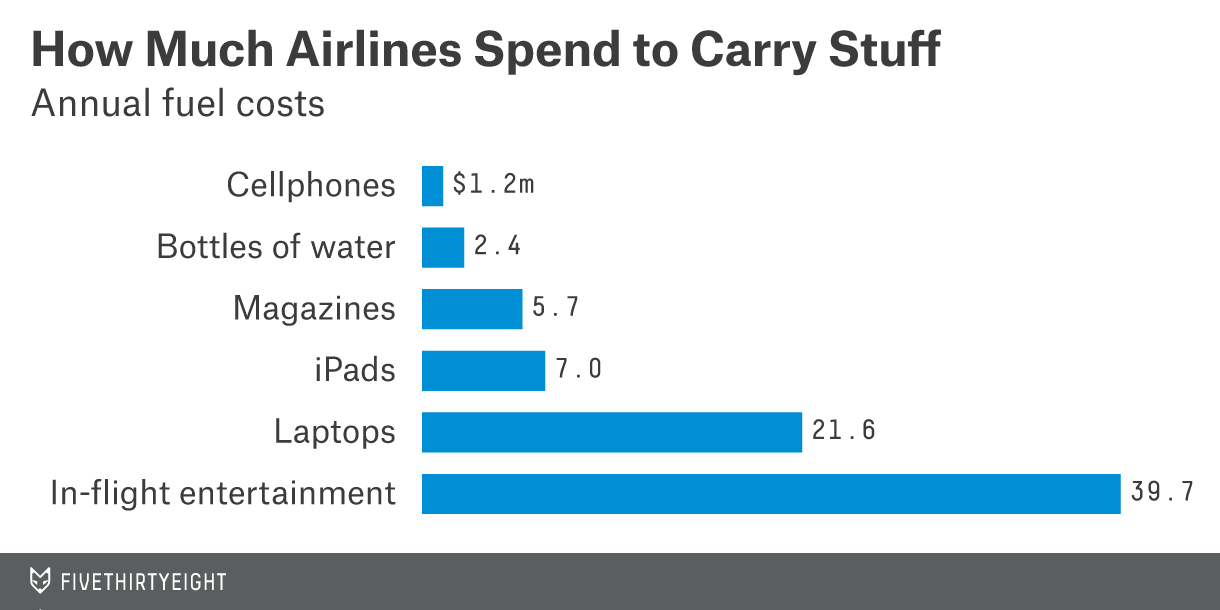 It costs Southwest about $1.2 million per year in added fuel when every passenger carries a cellphone, with larger costs of $7 million if every passenger brings a tablet computer, and $21.6 million if everyone totes a laptop. Using Southwest’s network as a proxy for similar-sized airlines carrying embedded in-flight entertainment systems, we found that fuel costs to carry these systems are approximately $39.7 million per year. When compared with installing embedded systems in the seats, simply handing everyone an iPad when they stepped onboard could save about $32.7 million per year in fuel costs.

In-flight entertainment isn’t the only area where airlines believe they can leverage technology for weight savings that translate to their bottom line. American Airlines has been leading the effort to replace pilot’s flight bags (typically full of dozens of pounds of paper documents) with “electronic flight bags”: essentially an electronic library of maps, charts, manuals and checklists loaded on an approved tablet computer. American believes it can save $1.2 million per year in fuel costs by switching to iPads in the cockpit, which is consistent with our analysis.

If airlines were extremely aggressive about weight savings, they could provide incentives for passengers to go to the restroom before getting on a flight; doing so could save Southwest about $2.1 million per year. Less aggressive ways to save on fluid weight can come in the form of $2.4 million per year in savings by ditching the small water bottles provided to passengers during a flight. Budget airlines, like Spirit, have realized this expenditure and now only provide water for a fee.

Finally, what about Bob Crandall’s olive theory? We calculate about $40,000 of annual fuel savings by subtracting one olive’s worth of weight for every passenger in today’s Southwest network.12

We’ve established that cutting weight can save airlines millions of dollars in fuel costs every year, but how much does this impact an airline’s bottom line? In 2013, Southwest’s fleet of almost 700 jets consumed about 1.8 billion gallons of fuel. Of every dollar earned in ticket prices, 33 percent was used to buy gas. Put another way, a reduction of fuel expenses by about 3 percent could increase profit margins by 1 percent.

According to MIT’s Airline Data Project, Southwest’s profits were $754 million in 2013. Over the past decade, the average yearly profit was $393 million. If Southwest wanted to install in-flight entertainment, it would reduce its average profits by 10 percent. Removing in-flight magazines could increase these average profits by over 1 percent (assuming no loss of advertising revenue). Other airlines stand to gain even more — Southwest is atypical in the industry for its consistent profitability over the past several decades. For an industry that counts profit-margin percentage points on one hand, small improvements matter.

From the airline perspective, this suggests a dual benefit from add-on fees (even for carry-on bags). The fees create incentives for people to lighten their travel gear, reducing fuel consumption. At the same time, they increase total revenues. So the fees are a win-win for the industry because they can improve both costs and revenues.

As long as fuel remains a significant portion of operating costs, airlines will continue to try to save money by shaving every ounce of weight they can from each flight departure. Some of this will come by providing incentives for passengers to lighten their personal travel gear and some will come from reducing the stockpile of service items carried on each flight. However, for an industry where pennies saved on each flight can lead to thousands or millions of dollars in yearly savings, the incentive for controlling weight — and even eliminating olives — is easy to understand.

Luke Jensen is a research assistant and Ph.D. candidate at MIT, where he studies airline operations and efficiency. He is also a pilot and certified flight instructor. @LukeLJensen

Brian Yutko is an aerospace engineer currently working as a postdoctoral associate at MIT. His research focuses on reducing the environmental impact of aviation and next-generation aircraft designs. @BrianYutko