One of the fun things we can do with our model is to change the election date to anything we like and see how it might impact the results. So what would the model project if the election were scheduled for tomorrow? 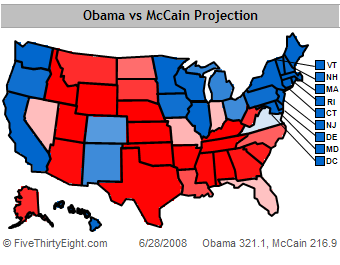 Notice how the red states turn redder and the blue states turn bluer. This is something you’ll see happen very gradually over the course of the next four months. As we near the election, smaller leads will become more meaningful, and more states will be taken out of play.

Overall, our model thinks that Obama would have an 88.6 percent chance of winning an election held tomorrow. The most competitive states would be as follows:

All other states are at 95% or better for the leading candidate.

McCain’s electoral prospects, unsurprisingly, would be very much tied to his chances of pulling out an upset in Ohio or Michigan. One thing that’s going on here, by the way, is that the amount of polling data in a particular state is a factor. For example, our model thinks that McCain would win by 4.4 points in North Dakota in an election held tomorrow, but still assigns Obama a 21 percent chance of winning there because the polling data is so sparse that we can’t quite be certain what’s going on. In Ohio, meanwhile, the model projects an Obama win of 4.2 points — less than McCain’s projected margin in North Dakota — but gives him an 88 percent chance of winning because that small lead is backed up by much more polling volume.

And there is still an outside chance that something totally wacky could happen, with the polling data off in the same direction in many states. As recently as 2000, there was about a 3-point miss in the final national polling averages … Bush was expected to win that election by about 2.5 points but Gore actually won the popular vote by a half-point. In 1996, Bill Clinton was 12 points ahead in the final polling averages but won by “only” 8.5 points … in 1980, Ronald Reagan led by just 3 points in Gallup’s last poll but actually won by almost 10 points. Sometimes, there is movement that comes too late for the polls to detect, or everyone is off in the same direction with their turnout assumptions.