The “computational pathologist,” a computer software program known as the C-Path, can examine thousands of tissue scans at lightning speed to diagnose patients with breast cancer and even predict their survival rates. Some believe the C-Path, which is built on digital imagery, is as good as or even better than a human doctor.

Quickly advancing technologies like the C-Path raise all sorts of questions for economists about the future of the U.S. workforce. Labor economists have long expected computers to displace workers who perform routine tasks — for example, file clerks, cashiers and bank tellers — but these days, economists are in a debate with techno-optimists over whether technology will also displace higher-skilled, professional jobs, such as doctors, lawyers and (yes) writers.

There’s evidence of this growing debate in a new paper presented Friday at one of the most important economic conferences of the year, the Jackson Hole Symposium, a Federal Reserve gathering that showcases cutting-edge research on the labor market. The paper’s lead author, David Autor, a labor economist at MIT, cautions against the expectation that emerging technologies will displace highly skilled workers.1

“The challenges to substituting machines for workers in tasks requiring adaptability, common sense, and creativity remain immense,” he writes. Speaking by phone on Tuesday, Autor said the media vastly oversells the degree to which technology will displace highly skilled workers. He believes changing technology will instead complement these workers’ skills and help them to become more productive.

On the other side of this debate is Autor’s colleague at MIT, Andrew McAfee. McAfee co-authored the book “The Second Machine Age” touting technological advances and forecasting their impact on workers. In addition to the C-Path, McAfee points to numerous examples of machine intelligence performing high-skill tasks as evidence of technology’s threat to human workers. Among these are tactile robots, which are capable of increasingly sophisticated sensorimotor skills and perception; machine learning algorithms, which can process large amounts of data and make key inferences; and natural language processing and face recognition software, which are improving machines’ communication with humans.

“Technology can do more and more of the work of the ‘middling’ worker,” McAfee said by phone earlier this week. Even highly skilled workers, he said, perform tasks in some sort of hierarchy. Take a journalist, for example. Coming up with a story idea and thinking of a fresh way to approach that idea both require complex troubleshooting skills and creativity, but some important but predictable stories can be written by computers. In some cases, that’s already happening: The “Quakebot” built by the Los Angeles Times automatically writes summary stories about reported earthquakes.

McAfee believes machines will continue to move up in the hierarchy of tasks. He said he’s “personally very confident we’re going to see these technologies succeed in the short to medium term” in performing highly skilled tasks.

There’s some evidence that growth is stalling for higher-skill occupations. Both McAffee and Autor pointed to new research by Paul Beaudry, David Green and Ben Sand of the University of British Columbia and York University in Canada that shows that since 2007, these jobs also have experienced stagnant wages.

And that stagnation is creeping ever higher. In the 1980s, middle-skill occupations — those above the 45th percentile in skill level — were still seeing growth; but by the 1990s, growth was flat for even higher-skilled occupations. That trend has only continued. From 1999 to 2007, the most highly skilled jobs (those above the 80th percentile) saw no change in their employment share. 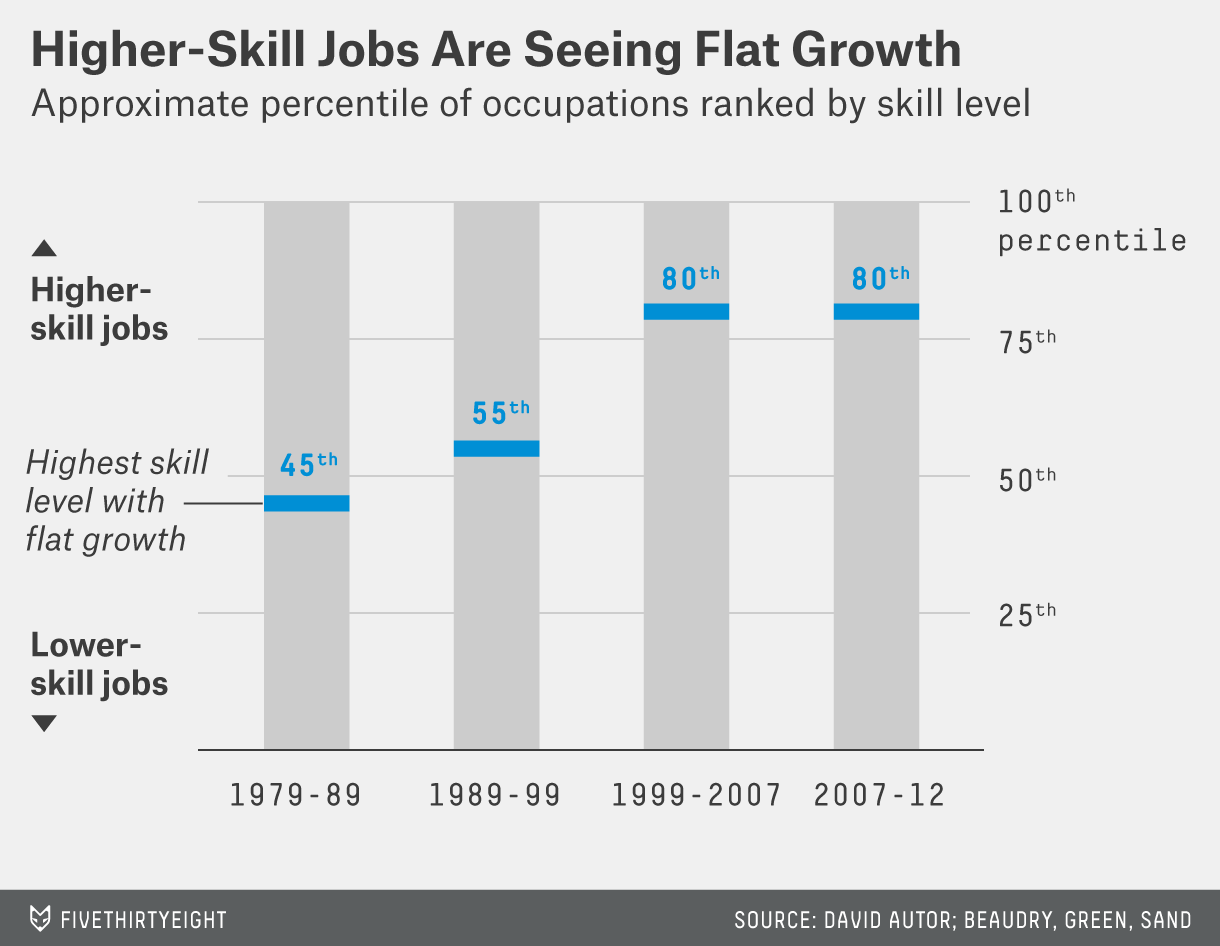 The authors then outline a theory showing the ripple effects of this phenomenon: Higher-skilled workers are pushed down the skill chain and take middle-skill jobs — think of your college-educated barista at the local coffee shop — consequently pushing down workers who previously held those jobs, if not pushing them out of the labor force altogether.

Whether technology is responsible for the displacement of highly skilled workers remains an open question. To McAfee, the answer is obvious: He thinks technology is playing an enormous role in driving these changes, and believes the American labor force has to reckon with that reality.

Autor, on the other hand, acknowledges that certain tasks and jobs are being replaced, but he doesn’t believe advances in technology are doing most of the replacing. He points to companies’ slowing investment in technology as proof that computers aren’t what’s driving out highly skilled workers. The level of investment in computers and software, as a share of gross domestic product, rose from 3 percent to nearly 5 percent during the 1990s IT revolution. But as the chart below shows, tech investment fell precipitously right after 2000, coinciding with the bursting of the tech bubble, and flatlined until the Great Recession in 2007, when it fell further. 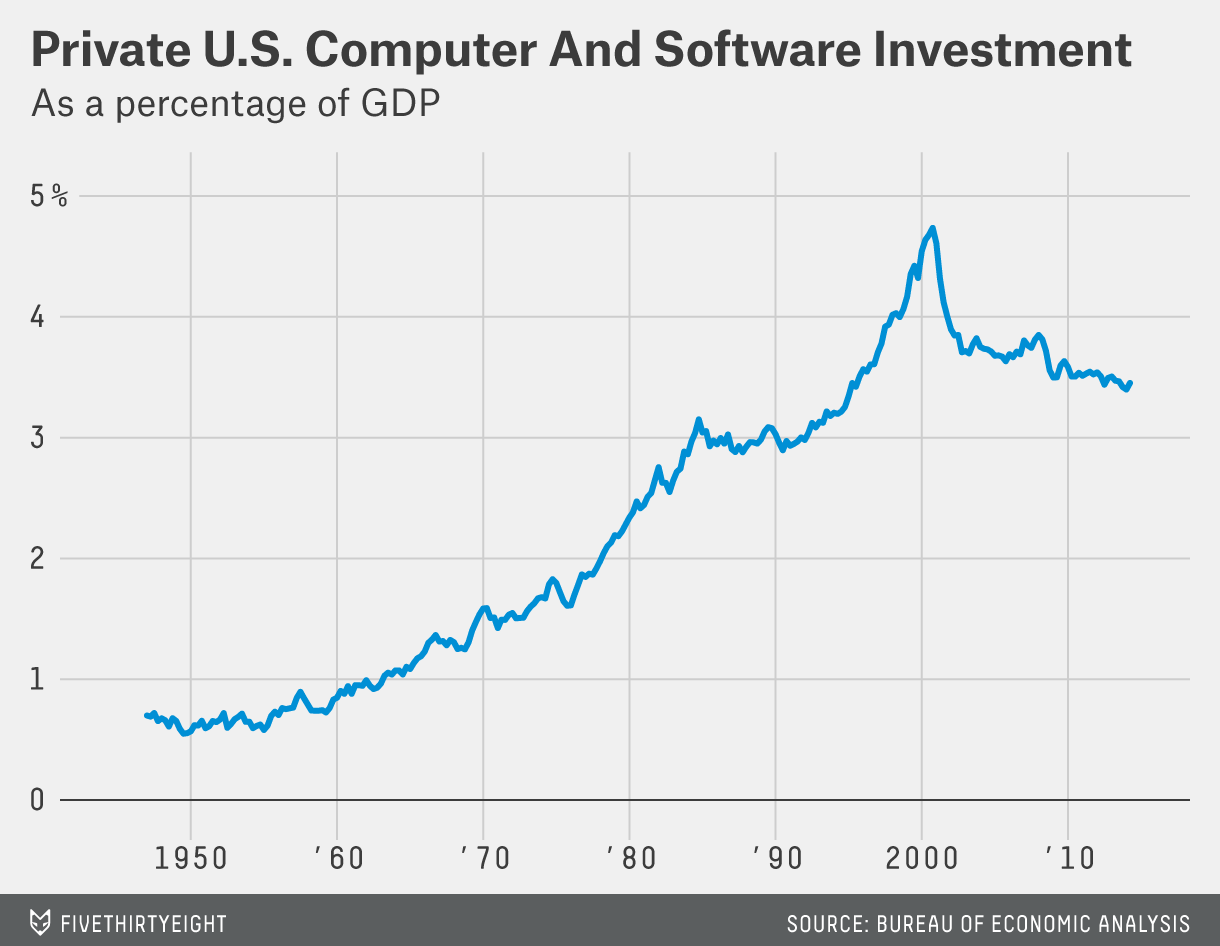 Put simply, Autor told me, “I don’t think technology is responsible for our employment malaise over the last 15 years.”

But even if the tech enthusiasts’ wildest dreams come true, Autor said he believes computers won’t replace highly skilled workers, they’ll just enhance the job these workers do. The more likely scenario, as his paper lays out, is that other jobs will be created, and with them the need for different skills.

We can see this going back to the industrial revolution. In 1900, 41 percent of the U.S. labor force worked in farming, but by 2000, that share fell to 2 percent. Autor said we could have never envisioned how jobs would change, or what new industries would be created.

“It’s very difficult oftentimes to recognize what is coming,” he said, “and much easier to see what is going away.”