One BIG difference: I have changed the half-life on the polls from the 30-day number that we use for the general election to 10 days for the primaries. So, recentness is at more of a premium (the specific number, however, is a WFG).

UPDATE: This now includes the new PPP poll that shows Clinton +3. Although that’s a nominally better result for Clinton than PPP’s previous poll, which had Obama ahead by two, this points to one of our differences in philosophy which is that we see this as more good data from a (relatively) good pollster over a large sample — and more data showing a tight race. This method is now calling Clinton’s edge at 6.9 points (she was at 7.5 previously). 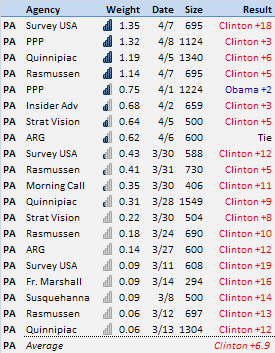