With four seconds left until halftime, trailing the San Francisco 49ers in a 14-7 game, the Arizona Cardinals defense had forced a fourth and goal at the 1-yard line. In what turned out to be a pivotal moment in the game, Niners quarterback Jimmy Garoppolo handed off to Jeff Wilson Jr. for a run up the middle that was stuffed for no gain. But what should have been cause for celebration for the Cardinals defense quickly turned into disappointment. The refs waived off the result; Arizona head coach Kliff Kingsbury had called a timeout before the play began.

San Francisco made Kingsbury pay on the next play, with Garoppolo tossing an easy touchdown to Emmanuel Sanders as time expired. After the game (which the Cardinals ended up losing 28-25), Kingsbury explained his reasoning behind the timeout, saying that the stoppage was to get a better look at what the 49ers might be planning offensively and that he “wanted them to hopefully burn their best play.”

Unfamiliar with the concept of burning a play, I reached out to a handful of coaches and experts to understand what Kingsbury might have meant. I was told that teams will often carry just three or four 2-point conversion plays into a game because of the rarity of the situation. Since the inventory of available plays is limited, a coach will usually call his favorite one first. Once a team lines up, some of the surprise is lost, so calling a timeout could force the play-caller to abandon the best play in favor of one the defense hasn’t yet seen.

One obvious problem with this explanation is that goal-line stands aren’t 2-point conversions. A play run on fourth and 1 at the goal line has some similarities with a 2-point conversion attempt — they’re both near the end zone, after all — but I was told that teams won’t necessarily limit themselves to their 2-point playsheets in goal-to-go situations. And if that was true of the 49ers, a timeout wouldn’t exhaust play inventory in the way Kingsbury might have assumed. For the gambit to work, it seems that a coach would need to have fairly detailed information about how an opponent organizes and prepares its game plan.

This made me wonder: Is there any evidence to suggest that icing the play-caller is a successful tactic? Do defenses tend to fare better following a timeout on fourth and goal at the 1-yard line? To find out, using data from Armchair Analysis, I looked at every play run on that down and distance from 2000 to 2018 in both the regular season and playoffs. I separated timeouts called by the offense from those called by the defense and compared the touchdown rate on plays with timeouts to plays with no timeouts called. The results were surprising. 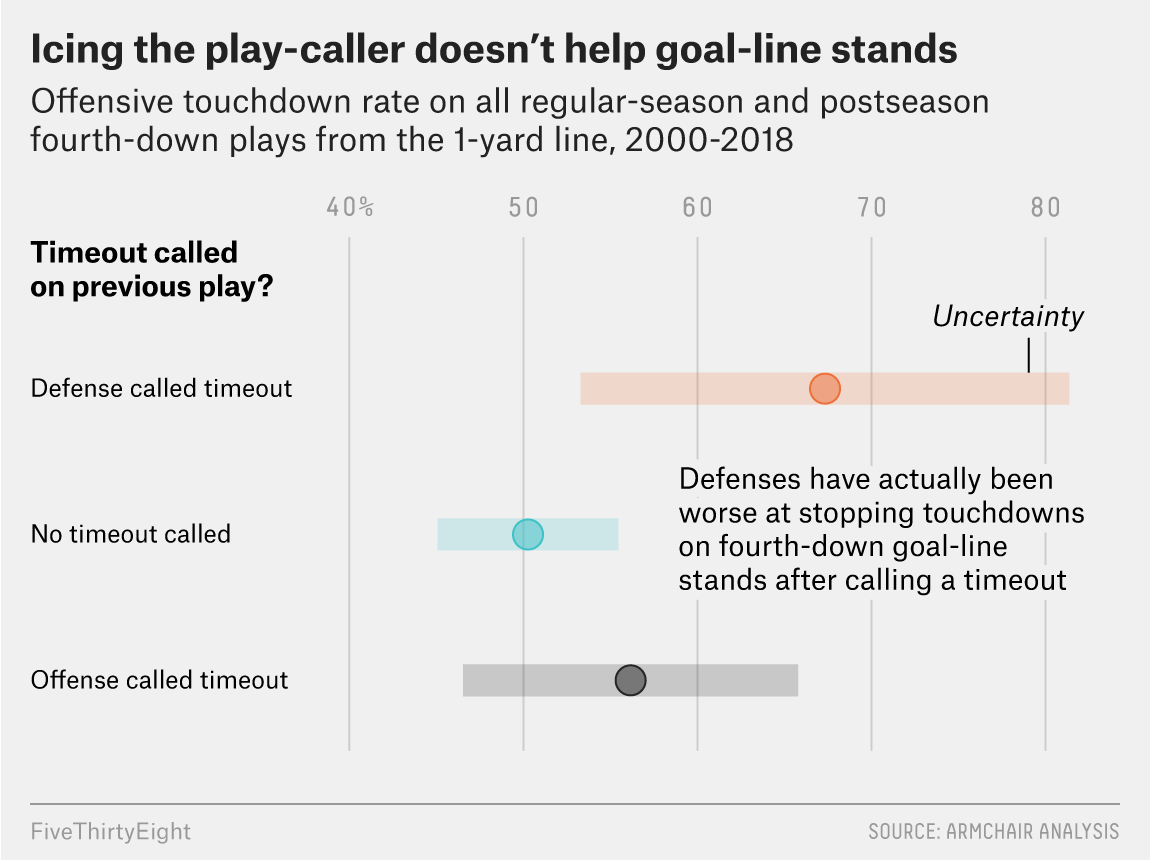 On goal-line stands after the defense calls a timeout, offenses score a touchdown about 17 percentage points more often than when no timeout is called, on average. Defenses have called timeouts in these situations just 46 times in the past 18 years, so there is still uncertainty about the true difference in touchdown rates, but there’s also no evidence that the touchdown rate after those timeouts is lower. In other words, the benefits of icing the play-caller appear to not exist — and the call may backfire more often than not, just as we saw with Kingsbury against the 49ers.

Perhaps this result shouldn’t be surprising. We’ve known for a while that icing the kicker is likely ineffective. In their book “Scorecasting,” Tobias Moskowitz and L. Jon Wertheim found that when they adjusted for distance, field goals attempted in high-pressure situations weren’t affected by defensive timeouts. If athletes aren’t affected, why would we think coaches would be rattled by a little gamesmanship? A play-caller’s job is to choose plays, and a timeout probably just gives him more time than usual to do it.