Have you seen those new Hyundai Sonata ads? In one of them we are watching an obviously frustrated, presumably senile septuagenarian fumbling with a medicine bottle, when Oscar winning-actor Jeff Bridges’ unmistakably charcoal voice pipes in with this foreboding enthymeme: “Millions of elderly adults continue to drive on our roads, year after year, with nothing more than a periodic eye exam required to renew their licenses…better get yourself a safe car. The all-new Sonata, from Hyundai.”

If this ad doesn’t sound familiar, that’s because there is no such ad. You can bet that Hyundai, or its Madison Avenue consultants, wouldn’t dare run an ad like that. The political blowback would be so swift and foreceful the company’s CEO would soon be on all the networks apologizing to seniors and probably announcing a huge corporate donation to some senior-related charity.

So why is Hyundai in fact running a pair of television commercials–including the visually entertaining “Slingshot” ad, below–that encourage consumers to buy their safe Sonatas because of the threat posed by newly-licensed young drivers? And why is there not a peep of complaint from anyone about this ad campaign?

Now, it’s true that teen drivers in America have the highest fatality accident rate per miles driven. In 2001-02, American drivers (in passenger vehicles) under age 20 were involved in about 8 fatality accidents per 100 million miles driven, as the figure below taken from this report by the Insurance Institute for Highway Safety shows. That rate begins to tail off for drivers by the time they reach 25, and then remains more or less constant at around 2 fatality accidents per 100 million miles until drivers reach 70–at which point the rates begin to rise again, spiking up dramatically for those over age 85. 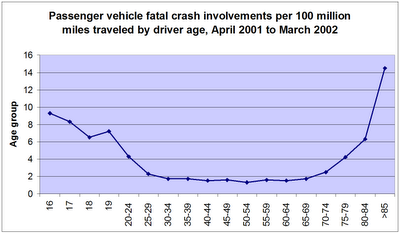 Of course, when we talk about young drivers a major contributing factor is alcohol and drug use, which are involved in a much higher share of accidents for younger than older drivers. But we have all sorts of public campaigns–not to mention serious penalties–to discourage all drivers, and especially young drivers, from operating a vehicle while under the influence, not to mention related safety campaigns discouraging if not ticketing people for driving or texting while driving. There is no such thing as driving while really, really old. We expect seniors to police themselves or family members to intervene to take them off the road when their abilities or reflexes decline. We are not so casual when it comes to young folks–and that’s fine.

My point here is not to justify teen driving behavior. It’s a serious problem, but one that receives ample attention, publicity and action by state legislatures. But few dare mention the fatality accidents on the other end of the age spectrum because seniors are politically powerful in ways teenagers are not. Worse, Hyundai apparently thinks it’s clever or cool to sell cars by making people fear young drivers. They would never do this if political clout were similar for younger drivers and older drivers, who happen to be–albeit for different reasons, of course–our most dangerous drivers.

Well Hyundai, you ought to be embarrassed. You should take down these ads and issue an apology. And damn, Jeff Bridges: As one of my favorite actors, I wish you hadn’t lent your legendary voice to these commercials. Very undude.