In a nomination contest in which literally every other major opponent to Mitt Romney has surged in the polls at some point, it is only fitting that the candidate who seems to have the late momentum in New Hampshire is the one who hadn’t: Jon M. Huntsman Jr., the former governor of Utah.

Two new polls out Sunday night showed a favorable trend for Mr. Huntsman. A Public Policy Polling survey, which had a very large sample size, gave him 16 percent of the vote, enough to challenge Ron Paul for second place. Another poll, by the University of New Hampshire, had Mr. Huntsman at 11 percent of the vote, although this was improved from his 7-percent standing earlier in the week.

These polls join an American Research Group poll released on Saturday, in which Mr. Huntsman was already in second place with 17 percent of the vote. His trajectory has also been favorable in the Suffolk University tracking poll.

The FiveThirtyEight forecast model, which is fairly aggressive about accounting for a candidate’s momentum, now projects Mr. Huntsman to receive 15.6 percent of the vote in Tuesday’s New Hampshire primary, putting him in third place, about equidistant between Mr. Paul and Rick Santorum.

If Mr. Huntsman finished exactly as the forecast now projects, it could put him in a sort of no man’s land. Such a finish would probably beat the news media’s expectations, which often lag a few days behind the polls, possibly giving him favorable momentum headed into South Carolina. However, because Mr. Huntsman has a very modest organization in South Carolina and is not polling well there, it is not clear how he would capitalize upon it.

Instead, Mr. Huntsman probably needs a lights-out, headline-making finish to become a major player in the Republican nomination race.

The ultimate example of this would be if Mr. Huntsman actually won New Hampshire. But the chances of that are exceptionally slim.

Just how slim? Our model puts Mr. Huntsman’s odds at about 250-1 against an outright win. It would very probably be the biggest last-minute upset ever in a caucus or primary.

Mitt Romney, in all likelihood, is simply too far ahead. Mr. Romney actually has lost some support in New Hampshire — our model now projects him to get 39 percent of the vote, down from 43 percent a few days ago — but that’s something you can afford when you held a 25-point lead.

Moreover, if you look beyond the top-line numbers in the polls, there is no real reason to think that Mr. Romney is vulnerable. I spent the past weekend visiting the campaign headquarters of each candidate. Mr. Romney’s operation in Manchester was the most impressive, with about 110 staff and volunteers on Saturday afternoon who seemed to be taking nothing for granted.

Mr. Romney also has the best favorability rating in the state, at 60 percent. And some polls have shown that his supporters are the most likely to turn out to vote. It is possible that some of Mr. Romney’s previous support had resulted from name recognition, but there should be a solid bedrock of support underneath it.

Still, late momentum should not be underrated, especially in a state like New Hampshire, so it is worth taking seriously the confidence interval that our model gives for Mr. Huntsman’s forecast. That confidence interval, enough to cover 90 percent of all possible outcomes, runs between 7 percent and 26 percent of the vote.

Perhaps the best-realistic-case scenario for Mr. Huntsman is that he does not win New Hampshire but comes close enough to make the outcome murky.

For instance, if Mr. Huntsman and Ron Paul both finished with about 25 percent of the vote, and Mr. Romney with 30 percent, that would in my view pass the smell test for a manifestly “close” result and would raise a lot of questions about Mr. Romney’s staying power.

More likely, the results will stay reasonably true to the forecast, with Mr. Huntsman finishing in the mid- to high teens, and Mr. Romney finishing just north or just south of 40 percent of the vote. There will be a few days of speculation about whether Mr. Romney has cleared some arbitrary benchmark for a “good” finish in New Hampshire. Then people will remember how robust Mr. Romney’s position is for the nomination and the talk will die down.

As a closing thought, it is worth comparing Mr. Huntsman’s late momentum in the polls to that which Mr. Santorum had in Iowa. The chart below compares the two according to the FiveThirtyEight forecasts; the horizontal axis tracks the number of days in advance of the election that the forecast was made. 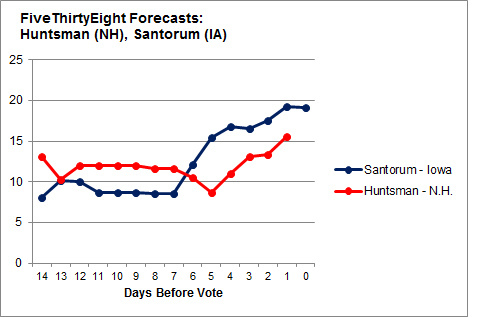 Mr. Santorum’s surge in the polls became apparent about 6 days before the Iowa caucuses, giving it time to become self-reinforcing. Although we were detecting a few indications of momentum for Mr. Huntsman over the weekend, it is really just now — less than 24 hours before the voting begins in Dixville Notch — that the signs of it are fairly unambiguous. Were the New Hampshire primary to take place on Friday rather than Tuesday, then Mr. Huntsman’s favorable trend might be extremely interesting, but it will probably be too little and too late.

The chart also provides a reminder of how difficult it is to turn around on a dime in the seven-day interval between Iowa and New Hampshire.

Mr. Huntsman’s polling momentum had actually been slightly negative in the two or three weeks preceding the Iowa caucuses and in the two or three days following them. This is probably because he had chosen to make almost no effort in Iowa and therefore was receiving almost no attention while the media was focused there. Thus, while Mr. Huntsman has gained 6 or 7 percentage points in the FiveThirtyEight forecasts over the past 4 days, some of that was making up for lost ground; only now is he forging ahead into new territory.