Coming off three straight electoral victories in 1997, 2001 & 2005 under the leadership of Tony Blair, the governing Labour party in the U.K. is in real trouble. Behind in the polls by about 9-10 points and limping along with their smallest majority since they took power of the House of Commons in the 1997 landslide, Prime Minister Gordon Brown has just a few months to engineer a radical turnaround. Indeed, some observers have remarked that the real question is not whether Labour will win (they won’t, many say) but instead how long they will be out of power.

At the same time, the Tory opposition has had a relatively difficult time capitalizing on the weakness of Labour. Opinion polling numbers for the Conservatives have been steadily rising since the end of 2007, following the close of Gordon Brown’s honeymoon with the British public after he became P.M. in June of that year. However, the 2009 expenses scandal, which triggered a cratering of public support for both the big parties, slowed most of the Tories’ momentum. In addition, the leader of the Conservatives, David Cameron, has yet to “seal the deal” with many British voters. Born, bred and educated in quite privileged environs (he’s an Eton & Oxford man), Cameron’s charismatic style often comes across as suspect to the voter. Though clearly a talented leader, he nonetheless sometimes seems very much the snake-oil salesman.

This post launches FiveThirtyEight’s coverage of the U.K. general election, where we will follow the campaign numbers and narrative from Her Majesty’s domain for the next few months. Of course, we must intentionally be vague regarding the time frame for the election and our coverage, as the date of the polling has not yet been set.

By law, the current Parliament must end by midnight on the 10th of May and a general election must be held within 17 days (not including weekends or official holidays). This means that 3 June is the latest that the 2010 election could occur, barring unforeseen official days of mourning or celebration (luckily the USA v. England World Cup match will not take place until 12 June). On the other hand, though quite unlikely, Brown could call a snap election today and with the Queen’s consent, the UK public would be voting mid-February.

The new Members of Parliament (MPs) will be elected to the House of Commons from 650 geographic constituencies (up from 646 in the 2005 election), a system that was mimicked in the creation of congressional districts in the United States. Based on population distribution and allocated by a series of “Boundary Commissions,” 533 MPs will come from English districts, 40 from Wales, 59 from Scotland and 18 from Northern Ireland.

About 65 thousand people are represented by each parliamentarian, with the MPs from the smaller UK nations — Scotland, Wales and Northern Ireland — tending to have slight overrepresentation. In contrast, in the United States, the average district of a member of the House of Representatives contains more than 650 thousand people, with smallest states also having significant overrepresentation. The last time population per Representative in the U.S. Congress was as low as it is now in the House of Commons was after the 1840 census.

Similar again to the U.S. (or should we say, the U.S. system is similar to this), the House of Commons districts use a “first past the post” system, where only the vote totals in each constituency are considered, as opposed to any national vote share number. As seen in systems of this sort, first past the post voting tends to push out third parties except where they are highly regional, sometimes called “Duverger’s law.” Accordingly, British politics have long been dominated by the push and pull between the Labour party and the Conservatives.

However, with strong regional identities (including language and national boundaries), third parties have an important role to play in U.K. elections. Unlike in the U.S. Congress, third parties hold a significant number of seats in the House of Commons; currently 104 MPs (16 percent) come from parties other than Labour or the Conservatives.

The largest third party, and indeed the most influential, is the nationally-competitive Liberal Democrats. Established in 1988 through a merger of the Liberal party and the Social Democratic Party, the “Lib Dems” regularly pull 20 percent or more of the national vote in general election, as compared to 30 to 40 percent for the big parties. However, they have never won more than 10 percent of the seats. 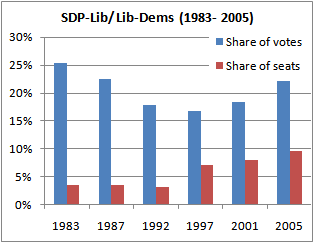 Other minority parties that are more regionally centered have been able to capitalize on their small level of support because it is focused in just a few districts. Here are the 2005 numbers for all the parties who got at least 100,000 votes and won a seat (the far-right British National Party and the Greens both got about 200,000 votes but no seats for the above reasons). 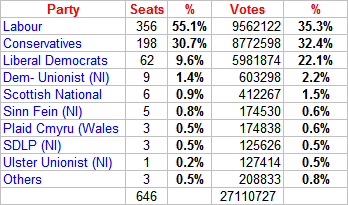 With the two biggest parties under-whelming the voting public with their programmes and politics — for example, a few rogues in Labour recently tried to remove Gordon Brown as the head of the party — the chances of result where no party has a majority of the chamber’s seats is increasingly possible. If the Lib-Dems creep above 20 percent, regional parties perform strongly, and the race between Labour and the Tories tightens further, the chances of a so-called “Hung Parliament” are increasingly likely. This has not occurred since the 1974 election, where a botched coalition building attempt by the Conservatives allowed the Labour government to remain in power, call and narrowly win a new election and govern until the end of the decade.

At the same time, huge anti-incumbent sentiment among the public, particularly after the messy expenses scandal, major economic impacts of the recession, and general frustration with the two big parties, has prompted a huge wave of retirements, particularly from Labour. More than 120 members are expected to retire, nearly 20 percent of the chamber. I guess they are trying to avoid being part of a hung Parliament — that is, Parliament hung out to dry by the voters.
—
Renard Sexton is FiveThirtyEight’s international affairs columnist and is based in Geneva, Switzerland. He can be contacted at sexton538@gmail.com