After thirteen years in power, the center-left party finds itself in opposition. The party’s flagship prime minister had retired several years earlier, and was replaced by his deputy–a technocratic, uncharismatic finance minister. A series of expense and kickback scandals tarnished the government’s reputation. More than anything, the people wanted something new.

The opposition conservatives stood to gain from the government’s stumbles, but when all the votes were counted, they could only eke out a plurality in parliament. A strong finish by a forward-looking, center-left, third party, and lingering support for regional parties resulted in a hung parliament. As the conservative prime minister formed a new, minority government, expectations were low. Some even predicted a snap election would be called within a matter of months.

The United Kingdom in 2010? Try Canada in 2006. But if–as 538 projects–the Conservatives come up short of a majority tomorrow, David Cameron might do well to have a chat with Canadian Prime Minister Stephen Harper. For the past three years, Harper has managed to maintain his government without the benefit of a parliamentary majority or standing coalition. From 1993 until the January 2006 election, Canada was governed by the center-left Liberal Party. During this time, the conservative opposition was split between the eastern-based Progressive Conservatives and the western-based Canadian Alliance. Like Tony Blair, PM Jean Chrétien was able to take advantage of the opposition’s disarray to present the Liberals as the natural party of government. Chrétien stepped down in 2003, and was replaced as PM by his finance chief (and erstwhile rival) Paul Martin. The Liberals lost their majority in the 2004 election, and formed a minority government against the (now united) Conservatives and sovereigntist Bloc Québécois. Fallout from an MP finances scandal (sound familiar?) led to a broad and deep erosion of Liberal support.

A Motion of No Confidence passed the House of Commons in November 2005, and elections were called for January 2006. The Conservatives gained 51 seats for a total of 124–31 short of a majority. Conventional wisdom was that this government would be short-lived, the Conservatives would have to form a coalition with the Bloc Québécois (hardly a natural partner), and Harper would have to govern as a centrist, Liberal-lite prime minister. 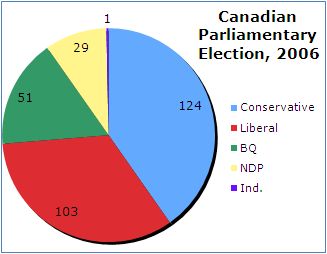 Wrong. Harper governed as a conservative, pushing an agenda of tax cuts, increased oil drilling, international cooperation with the Bush Administration, weakening of gun regulations, increased defense spending, tough anti-terror laws, and re-opening of the same-sex marriage debate. He didn’t get his whole agenda through, but neither did his government implode. Harper’s 2006 budget passed unanimously because the opposition parties forgot to stand in opposition during debate. The Liberals suffered greater damage from their fall from power than had been anticipated. When Stéphane Dion beat out Michael Ignatieff for the leadership spot, their power struggle betrayed a party in disarray. Without a cogent agenda, the Liberals offered little incentive for voters to pick a new government. Harper knew that any threat of a No Confidence Motion was a bluff, as the Liberals would come out of a new election worse off than they were going into it.

Despite having approved a law requiring fixed election dates, Harper called for the dissolution of parliament in September 2008. October elections yielded a larger Conservative plurality, but still eight seats short of a majority. The New Democratic Party –a social democratic, environmentalist party–picked up eight seats for a total of 37. The Liberals fell to 77 seats, ending Dion’s career with the ignominy of being only the second Liberal leader never to become PM. 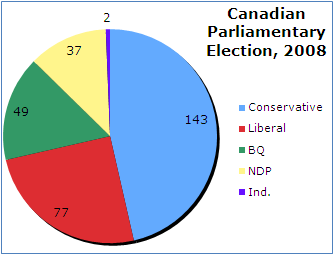 Ignatieff replaced him, and gave Harper a more aggressive opposition. Harper’s 2008 budget would have cut Federal funding of parliamentary elections–to the benefit of the Conservatives. All opposition parties formed an ABC coalition–Anyone but Conservative–to defeat this. The defeat of a budget resolution is considered a Motion of No Confidence, which would have triggered new elections only six weeks after the previous ones. Harper resolved this crisis by having Governor General Michaëlle Jean prorogue the parliament — effectively locking it out until late January 2009. In the meantime, Harper was able to secure Liberal backing for procedural votes in exchange for scrapping the budget resolution.

Since that shakeup, Harper’s government has been forced to tread a finer line to stay in power. Harper also had parliament prorogued again in early 2010 — ostensibly so that MPs could attend the Vancouver Olympics without having to fret over politics. The fact that this prorogation coincided with increased scrutiny over Canada’s role in Afghanistan led to international protests.

So what can David Cameron learn from his friends in Ottawa? The principal lesson is Go Big or Go Home: voters would rather see the government boldly pursue its agenda than dither over coalition-building. A hung parliament does not have to mean inertia, and a plurality of 308 seats should give the Tories enough leeway. Opposition threats of No Confidence Motions and rejection of the Throne Speech could just be a lot of hot air.

Labour could (quite rightfully) conclude that snap elections would simply add more Tory MPs–especially if the perception is that a Conservative government is effective. (Of course, if the Tories–and more specifically George Osborne–are seen as incompetent managers, these threats become more serious.) And prorogation exists as a “nuclear option” for the British PM too. Whether a Harperesque approach could work for the British Conservatives also depends on a number of exogenous factors: how badly Labour handles its defeat, whether Labour and the Lib Dems can form ad hoc coalitions to block certain measures, whether a Conservative-Lib Dem coalition is available as a fall-back option, etc. So while Cameron campaigned as Britain’s Obama, the realities of governing may force him to be less of a hoper and more of a Harper.

Note: This post has been corrected to note that Michael Ignatieff replaced Dion as Liberal leader after the prorogation crisis had already begun.

—
This article was authored by research assistant Thomas Dollar. Please send comments or suggestions to sexton538@gmail.com