One of the reasons to be skeptical that Rick Santorum could win the Republican nomination is that we now have a pretty good idea of how the vote will play out from state to state — and the coalition that he is building seems short of a majority.

It is not that Mr. Santorum’s delegate deficit is mathematically insurmountable. But he’s behind, and he is very unlikely to win states like New Jersey and California that either have a lot of delegates or use winner-take-all rules to award them. That might not leave enough fertile opportunities for him to gain delegates. If you go through the states one by one and make some reasonably optimistic assumptions about how Mr. Santorum might perform in each one based on their demographics, and then apply the delegate rules in each state, you’ll find it very challenging to come up with a plan in which he wins a plurality of delegates, let alone a majority of them.

So what Mr. Santorum needs instead is some kind of change in the underlying conditions of the race. Not just one where he starts to win marginal states (say, Illinois and Wisconsin) by a point or two instead of lose them (as he did in Michigan and Ohio). That doesn’t actually make all that much difference in the delegate math. He needs something more fundamental than that.

There is one obvious candidate: what if Newt Gingrich were to drop out of the race? This is hardly so far-fetched. Mr. Gingrich had a poor Super Tuesday, and his advisers have said that Mississippi and Alabama, which vote next Tuesday, are “must-wins” for him. Indeed, the main competition in these states might be between Mr. Santorum and Mr. Gingrich, with Mr. Romney likely to finish in third place especially if he makes little effort there.

The firm Public Policy Polling, however, has recently started to ask its respondents who they would support in a three-way race of Mr. Romney, Mr. Santorum and Mr. Paul, with Mr. Gingrich no longer on the ballot. By comparing the support levels in this question with those from the four-candidate ballot, it is possible to back into an estimate of where Mr. Gingrich’s supporters would go.

Performing this calculation and averaging out the results from the five states where Public Policy Polling recently asked this question (Ohio, Tennessee, Georgia, Wisconsin and North Carolina), I came up with the following answer. Slightly more than half (57 percent) of Mr. Gingrich’s supporters would go to Mr. Santorum. About a quarter (27 percent) would go to Mr. Romney. The remainder (16 percent) would go to Ron Paul.

Those numbers seem a pinch optimistic for Mr. Santorum — surveys conducted at earlier points in the race sometimes showed a more even distribution of second-choice support. The calculation also ignores the fact that some of Mr. Gingrich’s supporters would probably not vote at all if he weren’t on the ballot, rather than turn out for their second choice.

However, if you look at the actual ways in which voters behaved when the number of alternatives was limited, the results are a little troubling for Mr. Romney.

One example is Missouri, a state where Mr. Gingrich was not on the ballot because he did not file on time. (Missouri’s primary did not count for delegate selection — the state holds a caucus for that purpose instead — but it is an interesting data point.) Mr. Santorum got 55 percent of the vote there, far more than he has in any other state, and Mr. Romney just 25 percent.

It was similar in Virginia, where both Mr. Santorum and Mr. Gingrich were off the ballot. (That contest, unfortunately for Mr. Santorum, did count for delegate selection). In that state, Mr. Paul got 40 percent of the vote — twice as much as he’s attracted in any other primary and much better than polls projected. Although turnout in Virginia was low and Mr. Romney won all but three delegates there (he actually lost one Congressional district to Mr. Paul), this result was in some ways the most negative sign for Mr. Romney on Super Tuesday, since it suggested the presence of an “anybody but Romney” vote.

So suppose that you took those estimates from the Public Policy Polling surveys — Mr. Santorum gets 57 percent of Mr. Gingrich’s voters, Mr. Romney 27 percent, and Mr. Paul 16 percent — and redistributed Mr. Gingrich’s votes accordingly in the states that have already voted. Then you recalculated the delegate distribution based on the revised vote totals.

It took some work, but here is the calculation I came up with: 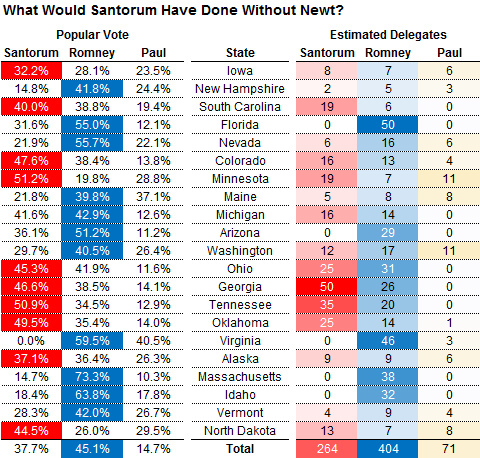 Mr. Santorum would have carried four states that he actually lost. The first two are the ones Mr. Gingrich won originally, South Carolina and Georgia, although his margin would have been very small in South Carolina. His share of the Gingrich vote would also have been enough to push him past Mr. Romney in Ohio and Alaska. He would not have won Michigan — Mr. Gingrich received very few votes there so there was little marginal benefit to Mr. Santorum — although it would have flipped one Congressional district and therefore given him the majority of delegates in the state.

Calculating the delegate totals is more challenging. One issue is states like Iowa, in which the results reported by the news media are from a presidential-preference straw poll that is not directly tied to delegate selection. In these cases, I assumed that delegates were proportional to the straw poll results, even though they are picked though a separate process. Another is states that allocate some of their delegates by Congressional district. I was able to find district-by-district results for Georgia, Michigan, South Carolina and Ohio and make exact calculations for those states, but had to make some best guesses in Oklahoma and Tennessee.

With those qualifications in mind, this general result should hold: Mr. Romney would still be significantly ahead in the delegate count. I have him with 404 delegates versus 264 for Mr. Santorum and 71 for Mr. Paul.

Mr. Romney’s delegate total, in fact, is very slightly higher than it would have been before the redistribution of the vote. There are cases when the shift in votes costs him delegates, such as in winner-take-all districts, or when one of his opponents gains more votes and crosses a threshold that enables him to receive proportional delegates. But Mr. Romney is being given some votes under these assumptions — if not as many as Mr. Santorum — and that helps him in cases where the delegate allocation is more proportional. These factors came close to balancing out, but Mr. Romney gained about 10 delegates on net.

Mr. Santorum, however, made the la
rger gains, winning about 110 more delegates than he has taken in the real world with Mr. Gingrich on the ballot. He made up a net of about 100 delegates with Mr. Romney, although he still trailed him.

Some of Mr. Romney’s advantage, just as in the real delegate count, is because the delegate rules have tended to work in his favor. Much of Mr. Romney’s delegate advantage comes from three states — Arizona, Florida and Idaho — that apply winner-take-all rules or something close to it, plus Virginia, where the other candidates were too disorganized to get on the ballot.

Still, that doesn’t explain all of Mr. Romney’s edge, nor does the split in the conservative vote. Even after receiving his share of Gingrich vote, Mr. Santorum would still have trailed Mr. Romney in the overall popular vote — about 45 percent to 38 percent.

Of course, an exercise like this cannot account for the dynamics of the race. If he had received some of Mr. Gingrich’s votes, for instance, Mr. Santorum would have won Iowa by about four points and been declared the winner there on election night, possibly giving him more momentum heading into future states. But there are also occasions when this would have worked in Mr. Romney’s favor — he would have narrowly lost South Carolina to Mr. Santorum, for example, rather than been overwhelmed there by Mr. Gingrich.

But that would be just the first step for Mr. Santorum — at best, a necessary but not sufficient condition for a comeback. He’ll need to find some further means by which he can eat into Mr. Romney’s coalition, and he’ll need to do so in a hurry since 21 states have already voted.