Welcome to an emergency edition of FiveThirtyEight’s politics chat. The transcript below has been lightly edited, and updated with the news that Joe Biden has tested negative for the coronavirus.

There’s a lot we still don’t know at this point, including the extent of White House staff affected or the severity of the president’s symptoms, but with about a month until Election Day, this is … an October surprise, to say the least.

Let’s start with one of the big questions: What does this mean for the election?

natesilver (Nate Silver, editor in chief): So for some reason I’m finding it hard to think through the electoral implications this morning. Maybe I need even more coffee. My thoughts right now are mostly some combination of:

So while I have some general thoughts, I wanted to lay that out first. I truly have no idea what to expect, how voters will react to Trump’s positive test, how the media will cover it or how other candidates will react.

ameliatd (Amelia Thomson-DeVeaux, senior writer): Yeah — it’s such a black box and honestly so dependent on what happens next. Does Trump get really sick? Does he stay mostly asymptomatic? How far did the virus spread in the White House? All questions we can’t answer right now, of course. But hugely important for how people respond.

natesilver: Yeah. We’re going to be saying “I don’t know” a lot in this chat. I don’t think there’s anything wrong with thinking through the electoral implications. There’s an election happening literally NOW — millions of people have already voted. So Americans are wrestling with this stuff. We just don’t have a lot of good answers.

ameliatd: And, of course, there’s an open question about whether Joe Biden will test positive, after he and Trump were at the debate together on Tuesday. [Editor’s note: Biden tested negative for the coronavirus after the conclusion of this chat.]

natesilver: Right, and one thing I’m not sure people realize is that there can be several days between exposure and a positive test. So we won’t know for sure which people have or don’t have COVID-19 for a bit here.

ameliatd: In the meantime, though, this does mean that Trump can’t campaign for at a while, right? And what about the debates, which were supposed to be on Oct. 15 and 22? Do those still happen?

How much does it matter if Trump can’t campaign, though? This was already a deeply bizarre year and I’m not sure his rallies were going to put him over the edge.

natesilver: At a very basic, square-one level, COVID-19 is a huge liability for the president, and so placing more focus on COVID-19 probably isn’t great for him. But I don’t know how useful that is as a prior. Could Trump getting COVID-19 change his messaging around the virus and pandemic? Maybe. But this is Donald Trump we’re talking about. He’s not inclined to be overly disciplined or deferential to scientists, etc. He’s pretty unpredictable, and we don’t yet know a lot about how serious his symptoms are. And this is a bad disease that can have cognitive effects in addition to physical ones.

Also in terms of very, basic, non-debatable priors: the president’s re-election bid was in DEEP trouble going into this, at least by conventional measures. And the smattering of post-debate polls we’d gotten had been particularly bad for him. So just worth keeping that in mind.

sarah: Absolutely. But on the question of how this happened … The Trump campaign has not taken precautions seriously. They’ve continued to hold large, in-person events. And they’ve even mocked the Biden campaign for wearing masks.

Is one possible scenario from this that Americans take the coronavirus more seriously? Views on COVID-19 and Trump’s response to it are polarized by party, but how could Trump’s positive test change public opinion?

ameliatd: I think what happens with public opinion really depends on how sick Trump gets. As I wrote over the summer, a big part of the reason Republicans are not as into COVID-19 restrictions is that they are much, much less likely to view the virus as a personal health threat to them. 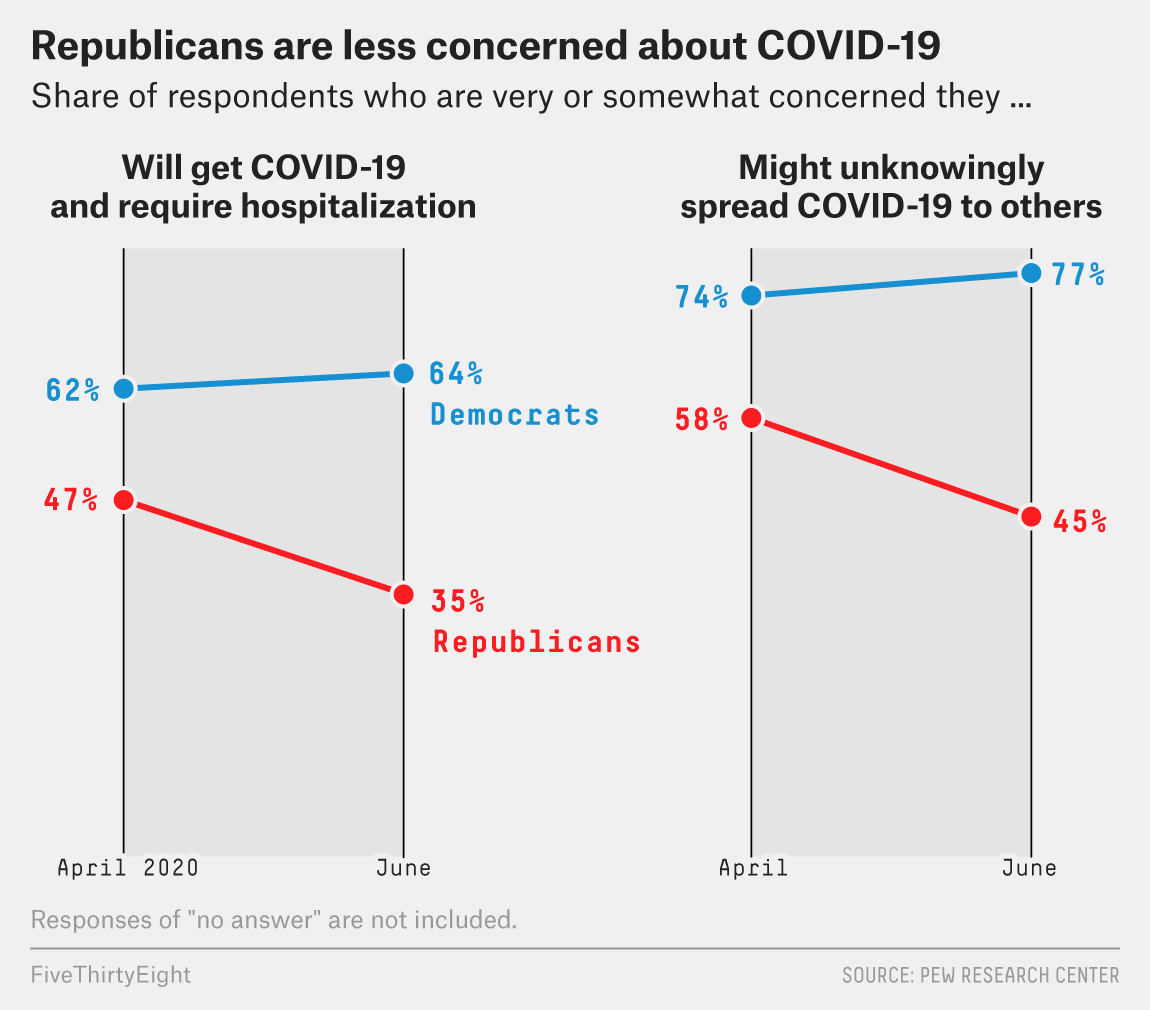 And research has indicated that Trump downplaying the virus is probably a significant driver of that. So I could see this playing out at least two ways …

perry: So, writing this on Friday morning, here’s what I expect …

The overwhelming majority of people, even those who are older, don’t die from COVID-19. So the most likely outcome is that Trump and some of his staffers have COVID-19, stay somewhat distanced from everyone for two weeks and then Trump returns to campaigning for reelection (I am not sure if he has the big rallies, but I wouldn’t rule that out.) I am not even sure the next two debates have to be canceled — particularly the Oct 22 one. And basically nothing has shaken Trump’s job approval ratings or really the race overall. I don’t really expect this to shift things either.

The president testing positive for COVID-19 is obviously hugely significant, but it’s not revelatory. We already knew Trump was not taking the virus seriously enough. Now, we have a much more obvious manifestation of that fact, but nothing is really different. Biden may not be able to attack Trump as bluntly on COVID now, for decorum reasons, but this positive test reinforces Biden’s message that Trump has let this crisis get out of hand. So this matters, but I’m not sure it matters electorally in terms of shifting a lot of people’s votes.

ameliatd: I know we’re thinking way down the line now, but is it possible that battling and surviving COVID-19 could actually make Trump more popular in some corners? Especially if he doesn’t get very sick?

natesilver: Amelia, I’m not sure I really buy that. I mean, somehow if it made the president into a more empathetic person, maybe, I suppose? But (i) I’m not sure that’s how he’s likely to react as opposed to sending 6,000 tweets about the “China Virus” or something; and (ii) he’s been trying to project a lot of macho-ness/dominance and to portray Biden as old and feeble and I’m not sure how contracting a serious disease himself fits into that.

ameliatd: Well, but if he contracts a serious disease and doesn’t get very sick and recovers fairly quickly — that certainly doesn’t seem as bad for him.

natesilver: I guess if he recovers in a couple of weeks, which is still what happens for most people, maybe he’ll say he kicked COVID’s ass and/or it wasn’t that serious. But I don’t think that necessarily affects anything electorally.

ameliatd: So, is the main impact potentially less about politics and more about the way Americans think about the virus? Either prompting Republicans to take it more seriously or reinforcing their sense that this really isn’t a big deal?

There was research back in March indicating that COVID-19 spreading at CPAC helped drive a brief moment when Republicans and Democrats were on the same page about the seriousness of the virus.

perry: So I don’t buy this idea that Trump will get COVID-19, be fine and then start calling it “Fake News.” We just learned Ronna McDaneil, the RNC chair, has also tested positive. So has Hope Hicks, a top Trump adviser. [Editor’s note: Sen. Mike Lee of Utah has since announced that he has also tested positive.] I think enough people in Trump’s circle may have the virus that THOSE PEOPLE start taking this more seriously, basically forcing him to as well.

natesilver: This is one sort of message we might hear, I guess:

Remember: China gave this virus to our President @realDonaldTrump and First Lady @FLOTUS.

WE MUST HOLD THEM ACCOUNTABLE.

sarah: But this question of whether it will change how seriously people perceive the coronavirus is an interesting one. Americans overall, as we saw in our debate polling with Ipsos, listed the coronavirus as their No. 1 issue:

However, among potential Trump supporters a much smaller share (15.5 percent) said the coronavirus was their most important issue, many more were concerned about the economy:

I think you could argue that the economy is probably linked to coronavirus among Trump supporters, but this could be a moment that has public health repercussions, yes?

ameliatd: Well, there was a jobs report this morning — one that I suspect is now going to get a LOT less attention. It was kinda positive — if you can consider the unemployment rate falling just under 8 percent positive.

perry: I think there could be a bunch of real, important health outcomes from this …

ameliatd: Yeah, I’m also wondering if this will change the way Republican governors approach restrictions, which are all but completely lifted in some states.

Although I do think it’s important to note that the vast majority of Americans say they’ve been complying with public health guidelines like mask-wearing, even if Republicans are much less likely to agree with government restrictions on businesses.

perry: To take an example: Georgia Gov. Brian Kemp, a Republican, is never going to give a press conference and say something like, “I was downplaying COVID-19 but then Trump got it and it reinforced how serious this was.” At least, I think that will never happen?

natesilver: I suppose I’m skeptical that this will necessarily change all that much. As you can see from the Kelly Loeffler tweet above, there are lots of partisan responses that don’t necessarily involve taking the disease more seriously per se.

Now, if Trump said something like what Perry just laid out, i.e. “I wasn’t taking this seriously enough, and I now understand the error of my ways…” then OK! That could make a difference! But I’m not sure that’s necessarily the most likely outcome.

ameliatd: But for regular people, I think a lot of this is about the gut-level fear that this might happen to them. Trump downplaying it, not wearing a mask, and not getting sick almost certainly helped reinforce the feeling among Republicans that it’s not a big deal. So I also think the way this is presented in conservative media, how visible Trump’s illness is — all of that matters for how people respond.

It’s true that the partisan response is pretty baked in at this point. But if Trump gets really sick, I could see that changing. Of course, if Republican governors start being more cautious with restrictions again and more people lose their jobs — that raises questions for whether a new stimulus package might actually get off the ground, too. I remain skeptical that will happen! But maybe there’s more pressure to break the stalemate in Congress?

sarah: There are a number of possibilities here, the most pressing one, of course, is that Trump can’t campaign — not to mention if Vice President Mike Pence has to step in. What should we be looking for as this story develops?

ameliatd: Trump’s symptoms are obviously a big one. And if they’re serious, there might be calls to take him off the ballot.

natesilver: Right, part of what makes this tough to predict — and I’m not against prediction! — is that we don’t yet know if Trump will have a mild or severe case, how many people in his orbit are also infected, etc.

perry: Assuming Trump recovers, what does his campaign look like on Oct. 16? Is he still holding big rallies? Is he wearing a mask? Are his staffers? Does the Oct. 22 debate take place, and in person? What about the Oct. 15 one? Is he further dismissing the virus because he survived it?

natesilver: Let’s also keep in mind that the recovery process isn’t quick for some people. It can take months, or longer — long-term COVID symptoms are scary.