Once–disgraced slugger Alex Rodriguez turned 40 years old Monday, and he’s still hitting home run hat tricks. His remarkable return to form (at the moment he’s a top-10 hitter despite missing all of last year) has even New York fans who loathed him not long ago mulling his redemption.

From at least some angles, very. His 23 home runs through 97 Yankees team games (as of Sunday) put him “on pace” for around 38 for the year, which would leave him trailing only Barry Bonds in 2004 (45 HR) and Hank Aaron in 1973 (40 HR) among players who started the season age 39 or older. Even assuming Rodriguez can’t keep up that pace and regresses toward the mean a bit, he seems very likely to end up in the top five all time for his age — he needs only 10 more home runs to clear that threshold.

If his season ended today, his home runs per game played would already be cream of the crop. Here are the top 20 HR/game averages for players 39 and older with at least 75 games played:

Looking beyond home runs, Rodriguez’s numbers are still excellent, but not quite as historic. Among other players starting their season age 39 or older who had at least 100 plate appearances, his 0.73 wins above replacement (offensive WAR)1 per 100 plate appearances is 32nd all-time.

Let’s compare Rodriguez to players who played similarly well (or better) into their late 30s2: 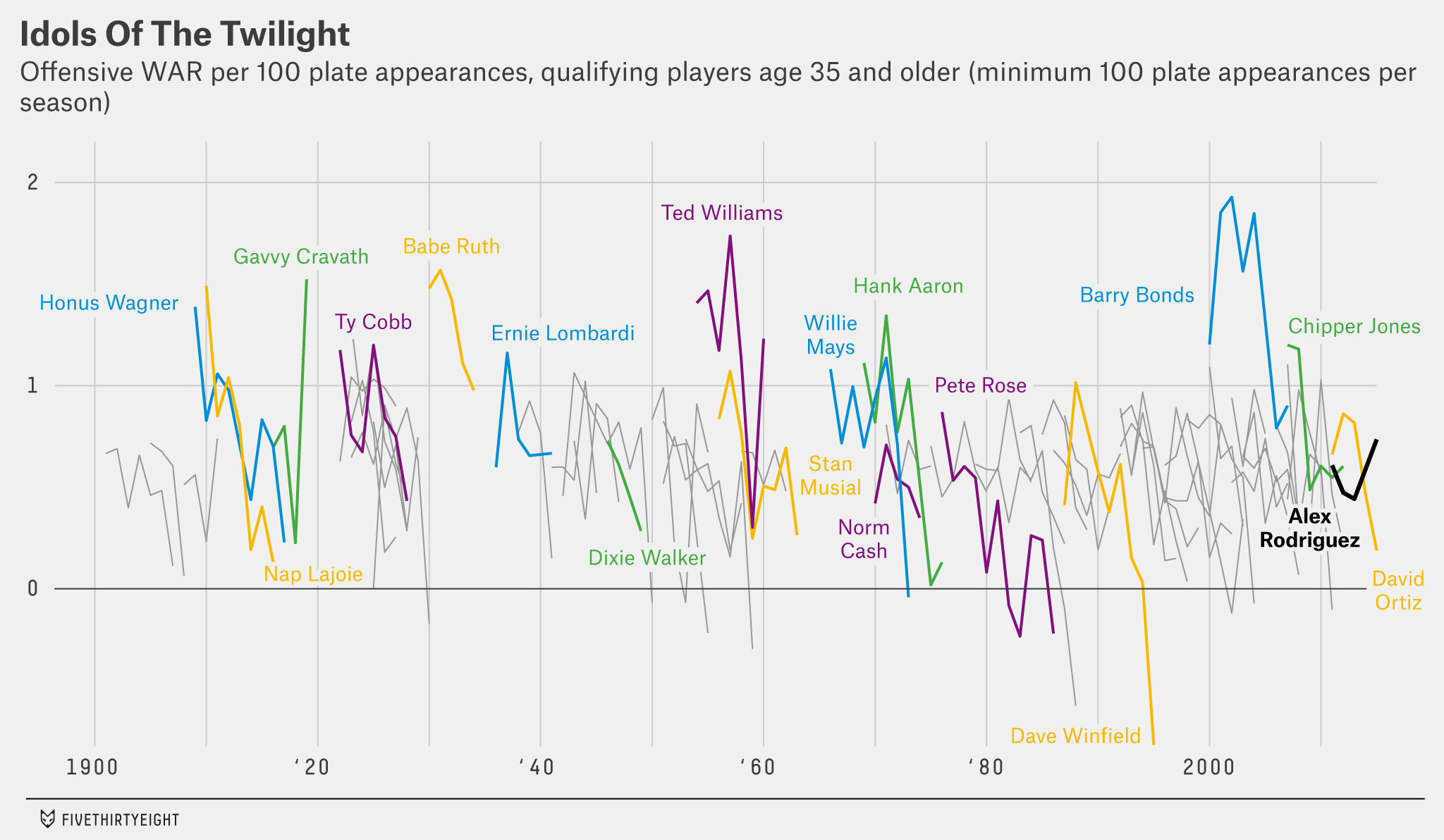 As we can see, the three main “peaks” are Babe Ruth, Williams and Bonds (unsurprising). But Rodriguez’s twilight career, even counting this season, is still fairly mainstream (so far).

Rodriguez’s dramatic-seeming improvement this year really isn’t that unusual either — probably worth noting given suspicions stemming from his history of performance-enhancing drug (PED) use. Rodriguez has jumped 0.3 wins per 100 plate appearances from the last season he played to this one. That’s good, but it’s only the 53rd-largest such jump among those 39 and older (compared with 134 declines greater than 0.3).3 That is, he’s no Gavvy Cravath, who went from a .696 OPS (on-base plus slugging) at age 37 to a 1.078 OPS at age 38.

Indeed, playing deep into one’s 30s (and even beyond) has gotten much more common (though the increase is a bit less pronounced in Rodriguez’s 39-plus age group): 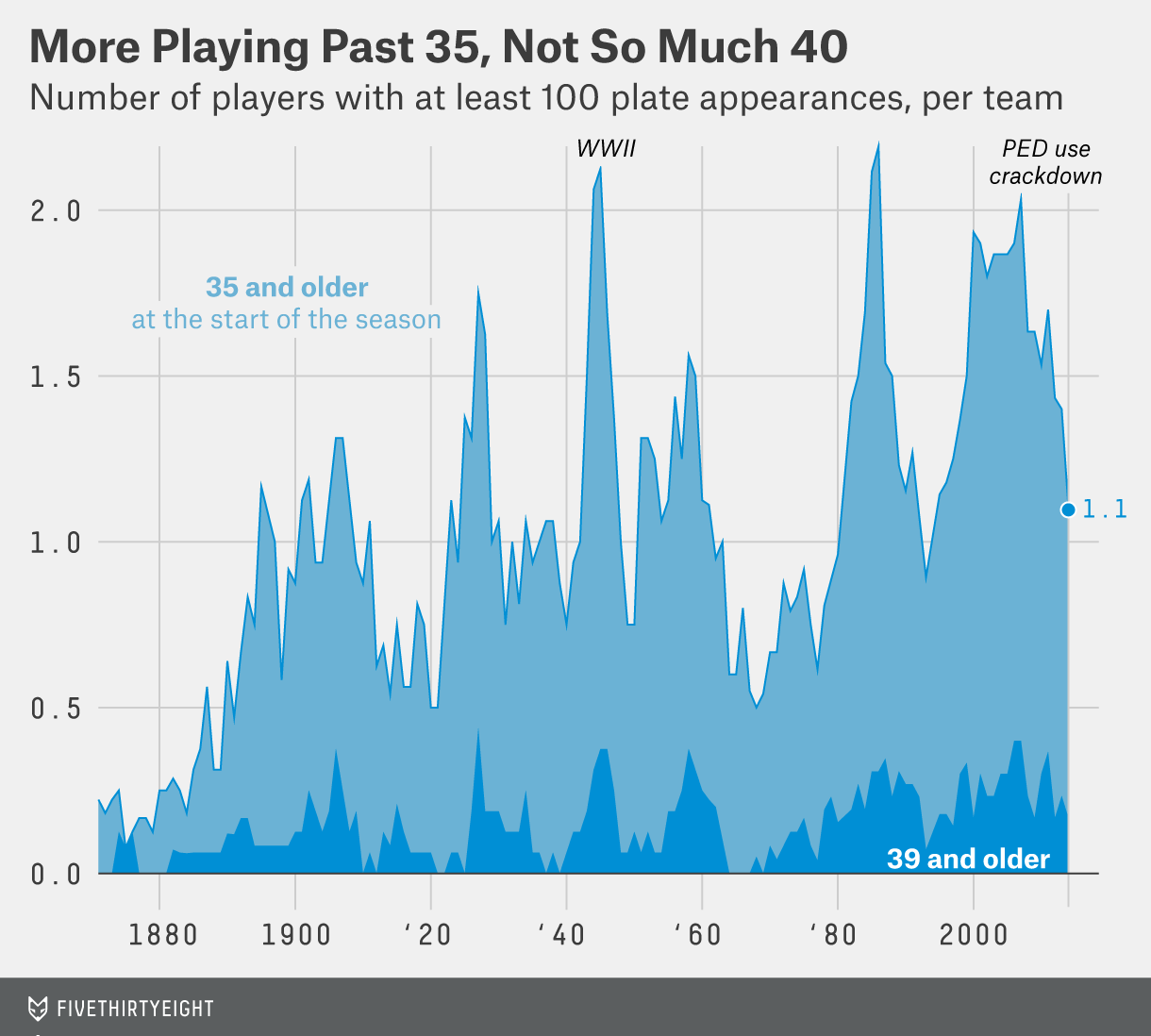 It’s interesting that Rodriguez is somewhat bucking the recent downward trend, one that seems to have started around when MLB began cracking down on PED use (a speculative causal connection, but one that’s highly likely, in my opinion).4 With the departure of players like Bonds — who couldn’t find a job in 2008 despite having 1.045 OPS in 2007 (higher than Mike Trout in 2015), baseball has lost roughly half its number of batters 35 and older since 2007.

In other words, one of the more remarkable aspects of Rodriguez’s season is that it’s defying a trend that likely results from league efforts to end PED use, the very thing that helped make him so good before — as well as such a pariah later.

CORRECTION (July 29, 6:06 p.m.): An earlier version of this post misstated the seasons in which Rodriguez played. He did not play last season, so his increase of 0.3 WAR per 100 plate appearances was from 2013 to this season, not from last year to this one.