Real Clear Politics’ Jay Cost takes issue with the bit of conventional wisdom — one, indeed, which I’ve espoused rather frequently around here and which was also put forth by Ed Kilgore in a column at Salon — that the G.O.P. has an objectively weak set of 2012 hopefuls.

To comprehensively analyze this question would require us to compare the current Republican candidates against those from a number of election cycles in the past. It is at least fairly clear, however, that the Republican candidates are currently regarded more poorly by the public than the leading Democratic candidates were four years ago.

The chart below takes a simple average of all favorability polls conducted of Republican hopefuls within the past year, and compares it against the numbers achieved by prospective Democratic candidates in the period from April, 2005 through June, 2006. In order to be listed, candidates must have been polled by at least two different survey organizations in their respective windows. 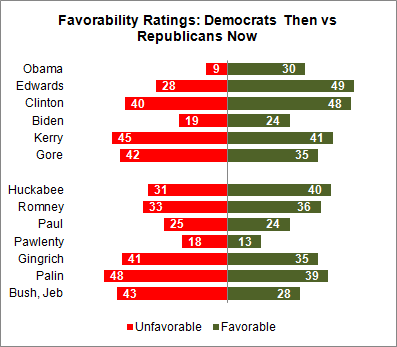 At this point four years ago, it ought to have been clear that Democrats had some fairly promising options. Although only about half the country knew who Barack Obama was, those who did had a favorable impression of him by a 3:1 margin. None of the plausible Republican candidates — with one arguable exception that I’ll discuss below — is anywhere in that ballpark. Democrats are obviously glad that they didn’t nominate John Edwards, but he too had a very good net favorability rating (+21, the same as Obama’s), substantially better than that of the most favorably regarded Republican candidate, Mike Huckabee, who is at a +9.

Hillary Clinton was more polarizing. Nevertheless, somewhat contrary to all the discussion that ensued at the time about her high unfavorables, she was safely into positive territory in most polls, and (like Edwards) had significantly higher raw favorables than any of the Republicans have been able to achieve.

The Democrats did have a couple of prospective candidates who didn’t run, but who would have started out with a favorability deficit if they had: these are their standard-bearers in 2000 and 2004, respectively, John Kerry and Al Gore. Their numbers are comparable to a “recycled” Republican hopeful, Newt Gingirch.

But in general, the numbers for the Republican candidates don’t match up well with those for the Democrats. Mike Huckabee and Mitt Romney are now regarded as more favorable than not by the public, but did not have the lopsided numbers that Obama or Edwards did. Meanwhile, one of the more likely Republican nominees, Sarah Palin, has famously poor numbers. And the closest thing to a dark-horse that met our standard of having been polled by at least two different groups — Minnesota Governor Tim Pawlenty — is at least as likely to elicit negative reactions than positive ones from those who have gotten to know him.

There is one long-shot Republican hopeful who potentially breaks the pattern: the Commander of U.S. Forces in Iraq, David Petraeus. There isn’t much recent data on Petraeus, but he scored hugely favorable ratings when Gallup tested him three times in 2007, including a 61-22 rating in September of that year. On the other hand, when Public Policy Polling tested him in January without introducing him to their respondents with his military title, his numbers were much milder: 25 percent favorable, and 12 percent unfavorable. Still, he would seem to be the one prospective GOPer who could break the mold and really jump out of the starting gate with a wind at his back.

The others, though, are problematic, which is one reason why an unnamed, “generic” Republican candidate fares a lot better against Obama than any actual Republican does.