Hawaii Rep. Tulsi Gabbard has had an unconventional political career. When first elected in 2012, she became the first Hindu and first American Samoan voting member of Congress. Before that, she was the youngest person ever elected to the Hawaii Legislature but left it behind to deploy to Iraq with the Army National Guard. She is a progressive favorite with a conservative record. She grew up in a mixed-race, mixed-religion1 household that preached both vegetarianism and homophobia.

Now, Gabbard is launching a long-shot campaign for president of the United States, although she still hasn’t made her promised formal announcement. She has little name recognition outside Hawaii, and at age 37, she is only just constitutionally eligible to sit behind the Resolute desk. Fittingly, if she wants to win the Democratic nomination, she’s going to have to follow an unconventional path to get there.

First, it’s very hard to become president — or even get nominated for the job — if the top line on your résumé is U.S. representative. I count 10 such candidates who have run for president in either the Republican or Democratic primary since 2000.2 None finished higher than third place. John W. Davis, in 1924, was the last major-party presidential nominee whose highest previous elected office was the U.S. House.3 The last — and only — sitting U.S. representative to be elected president was James A. Garfield in 1880. It’s hard to stand out when you’re just one of hundreds of legislators, and Gabbard is no exception. Pollsters didn’t ask about Gabbard in a single poll between Election Day 2018 and her announcement earlier this month, a sign that she hadn’t yet made a splash in the invisible primary. And in three national polls released on Tuesday, she registered no higher than 2 percent (3 percent if you limit the field to only the candidates who have announced thus far).

That doesn’t mean Gabbard can’t build a core of support from scratch. She is undeniably a very talented politician, as observers of Hawaii politics can attest. When she first ran for Congress in 2012, she trailed the primary front-runner, the well-known former mayor of Honolulu, by 45 points in early polling, but she wound up defeating him by 21 points. According to the most recent Honolulu Civil Beat poll, she is now Hawaii’s most popular elected official, with a 61 percent positive and 24 percent negative rating. She won her 2018 general election with a whopping 77 percent of the vote, albeit in a very blue district.

Gabbard’s brand in Hawaii is strong thanks in part to her unique combination of identities. As her website puts it, “As a mixed-race woman, combat veteran, martial artist, lifelong vegetarian, and practicing Hindu, she also is the embodiment of the type of diversity which is at the very heart of what America was founded upon.” However, it’s not clear that what helps her in Hawaii will help her in a nationwide primary. The U.S. has a smaller share of Pacific Islander and military voters than Hawaii does, for instance. Her youth and gender look like they could be electoral strengths, at least on the surface: We estimate that around 30 percent of the 2020 Democratic primary electorate will be millennials — a group that Gabbard, having been born in 1981, can uniquely appeal to. And there is evidence from 2018 that Democratic primary voters are going out of their way to vote for women in the Trump era. But on the flip side, it’s naive to assume Gabbard won’t face at least some ageism and sexism in how she’s perceived and covered.

Most likely, though, none of these factors will be as important as Gabbard’s ability to appeal to the left wing of the party. According to Chad Blair, a reporter and editor at Civil Beat, Hawaii’s many progressives are the single biggest source of Gabbard’s political strength. Nationally, she made headlines in the 2016 primary when she quit her position as vice chair of the Democratic National Committee to endorse Bernie Sanders, frustrated with the DNC’s reported favoritism toward Hillary Clinton. In the popular imagination, the episode established her firmly on the progressive side of the “progressive vs. establishment” divide.

There’s just one problem: Although she has voiced support for progressive positions like Medicare for all and free college tuition, her actual record skews moderate. She has broken from her party on votes to increase restrictions on refugees and weaken gun control. She has introduced legislation supported by GOP donor Sheldon Adelson and interviewed for a possible position in Trump’s Cabinet. She has a -0.280 DW-Nominate score, which measures politicians on a scale from -1 (most liberal) to 1 (most conservative) based on their congressional voting records. That made her more conservative than 83 percent of House Democrats in the 115th Congress. 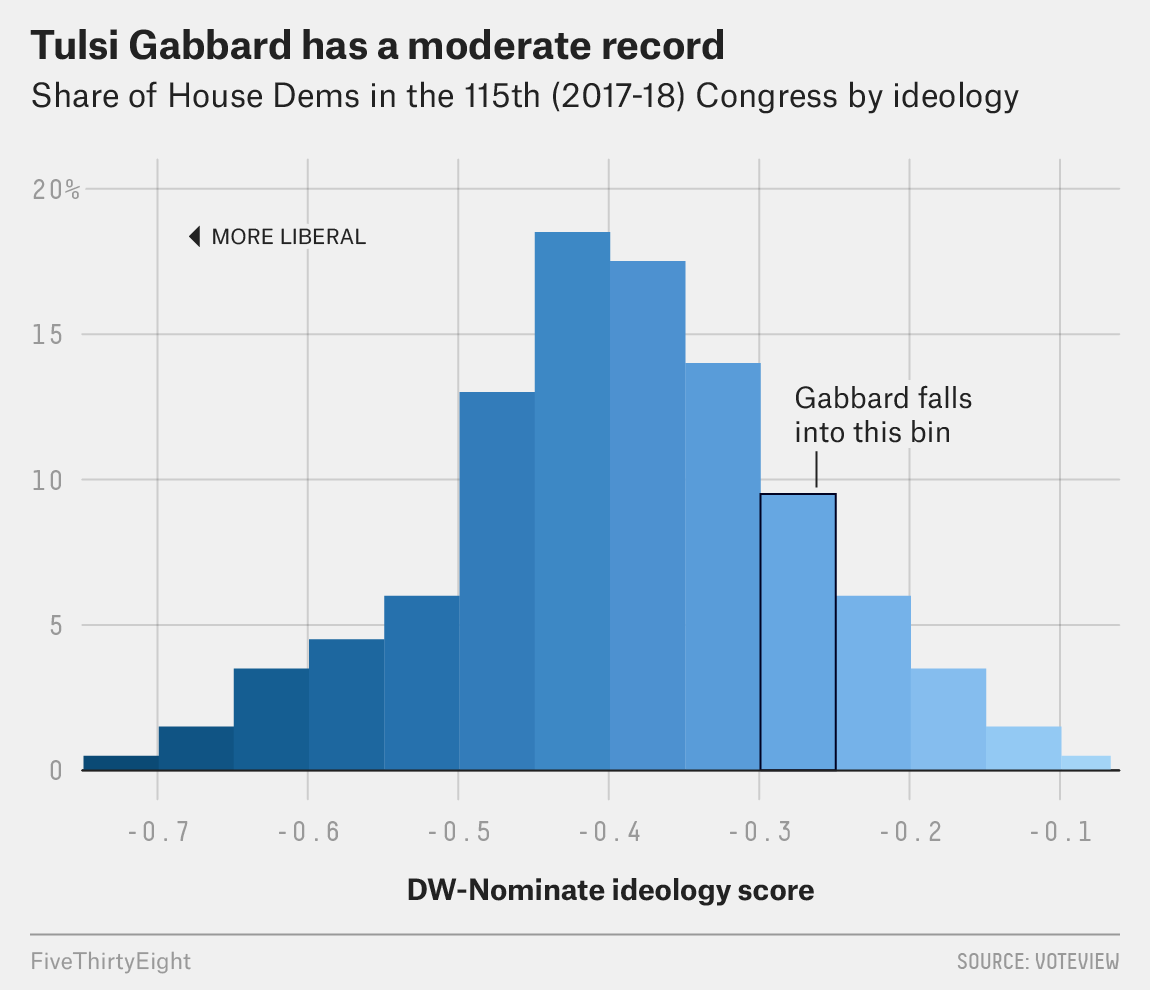 True-believer progressives also balk at Gabbard’s lengthy opposition-research file, which is bulging with ties to controversial figures and lingering questions about her conservative upbringing. While some say her opposition to military intervention in Syria makes her an advocate for peace, others say it makes her a “mouthpiece” for Syrian President Bashar al-Assad. In 2017, she was widely rebuked for taking a meeting with Assad, an act that legitimized the accused war criminal, and saying she was “skeptical” of the U.S. conclusion that Assad had used chemical weapons. The previous year, she was one of only three members of Congress to vote against a resolution condemning the Syrian government’s use of force against its own people.

Closer to home, Gabbard grew up a spiritual follower of a Hare Krishna sect that has been accused by former members of being an authoritarian cult. Its teachings ran the gamut from environmentalism to anti-gay activism, something that has already created headaches for Gabbard’s presidential campaign. As a teenager, Gabbard worked with her father, a fervent crusader against gay rights, at the Alliance for Traditional Marriage, which supported conversion therapy and helped pass an anti-same-sex marriage law. At least twice as a state representative, Gabbard referred to LGBT-rights advocates as “homosexual extremists.” She has since apologized and released a lengthy statement affirming her support for same-sex marriage and “LGBTQ+” rights, but as late as 2016, she told Ozy magazine that her personal views remained unchanged. In 2017, she told the New Yorker, “Just because that’s not my lifestyle, I don’t think that government should make sure that everybody else’s lifestyles match my own.”

Overall, Gabbard is a good example of why the “progressive vs. establishment” narrative is a flawed one. Really, party divisions unfold along two dimensions: ideology (progressive vs. moderate) and tone (establishment vs. anti-establishment). Gabbard is an anti-establishment moderate, and it’s not clear if there’s an appetite for that in a primary. Then again, that’s what Trump was — and GOP primary voters didn’t seem bothered by his controversies and frequent departures from conservative gospel. The big question for Gabbard is whether Democratic voters are also willing to look past similar imperfections for the right messenger. And like Trump, she is a compelling messenger.