When the NCAA men’s basketball tournament picks up full speed Thursday, many fans will tune in with the hopes of seeing one thing: upsets. Some no doubt will come on last-minute buzzer beaters, but plenty will probably be long-simmering, the kinds of games that you can’t look away from. Those games will be all about tension: The underdog can’t possibly hold on to this lead, can it?

We can figure out the answer to that question. Or at least what we should expect to happen when an upset is brewing — specifically, at what point in the game an underdog with a lead is more likely to win than lose.

I analyzed play-by-play data from every NCAA tournament since 2004, which is the earliest that second-by-second scoring data is readily available. I considered all games played by teams with different seeds, leaving me with about 700 games to analyze. In the analysis, I estimated the probability that a lower-seeded team (i.e., the better team, according to the selection committee) wins the game, depending on the score and the time remaining.

At the opening tipoff, the underdog has a 29 percent chance of winning the game. But if the game is tied or the underdog is ahead with five minutes remaining in the first half, the probability of an upset is higher than 50 percent.1

It is, of course, not that simple. There’s a big difference between an “underdog” that’s a No. 2 seed and one that’s a No. 16 seed. 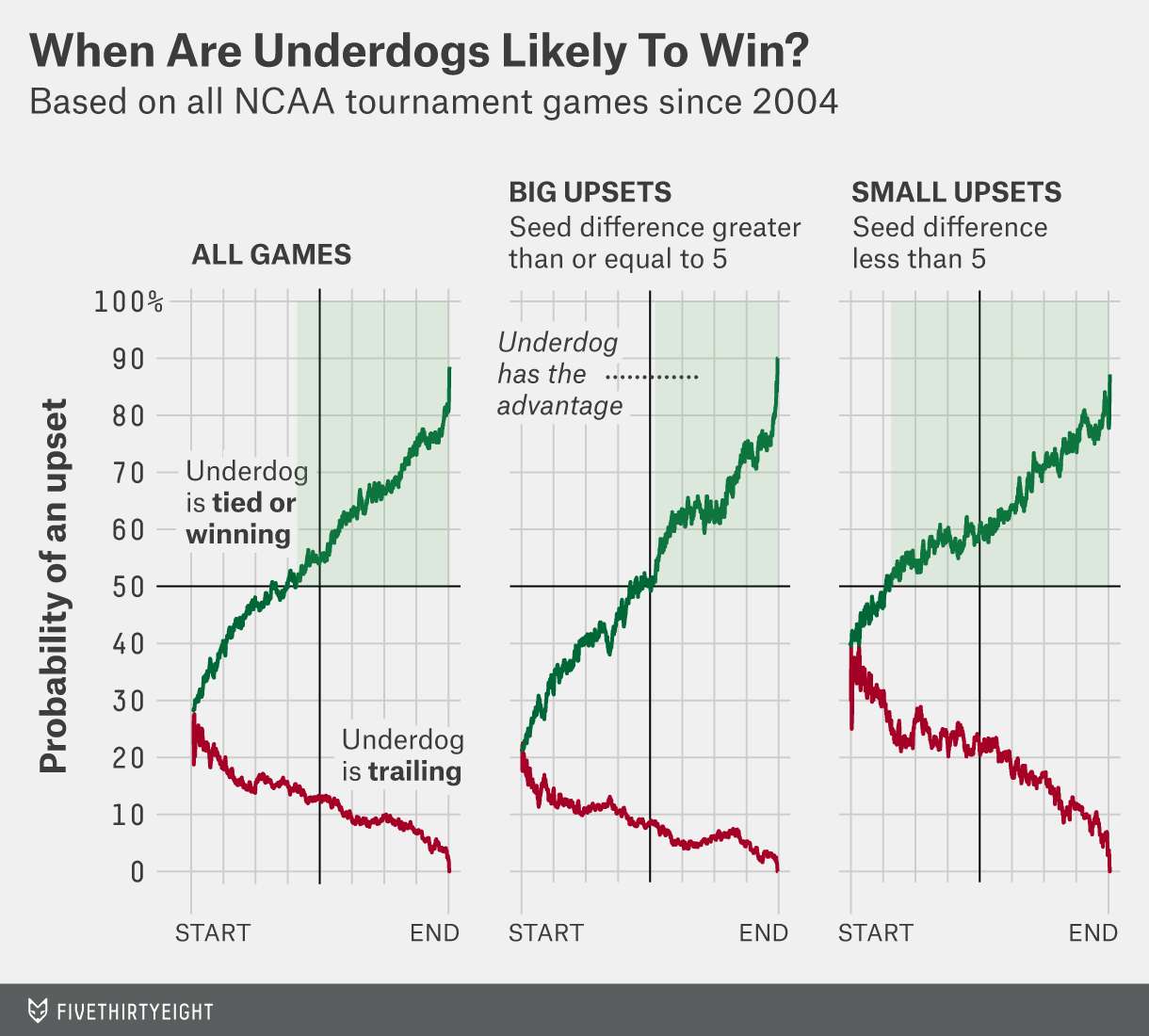 The graph shows the difference between the average upset, the big upset and the small upset. As you might expect, the big underdogs begin the game with a slightly lower probability of winning (about 20 percent). Also unsurprisingly, a big underdog with the lead does not cross the 50 percent win probability threshold until around halftime.

But the results are very different when you look at small upsets. In these matchups, when the underdog has a lead or the game is tied at any point more than five or six minutes into the game, it’s likely that we’re going to see an upset. 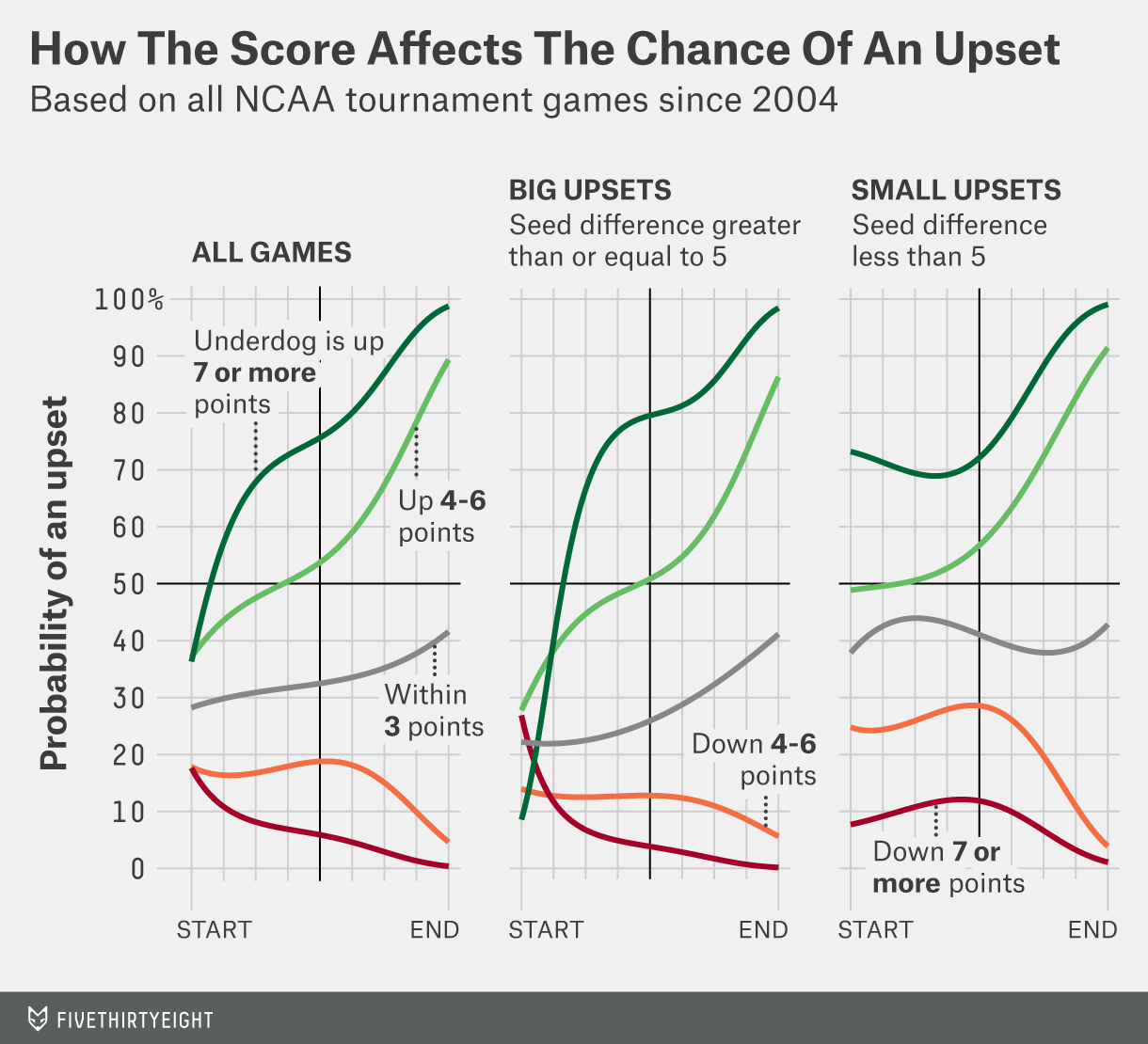 The figure above shows the results from this analysis.3 When a game is close, within 3 points in either direction (gray), the average favorite is still more likely than not to win. But, assuming the game stayed within 3 points all the way through, the chances of an upset increase throughout the game. By the last few minutes, if the game is within one possession, the average better-seeded team has only a slight advantage in win probability. The probability that an average underdog with a two-possession lead (light green) will win crosses the 50 percent threshold with about five minutes left in the first half. And an underdog who leads by more than 7 points (dark green) perhaps shouldn’t be considered an underdog at all.4 Its odds of completing the upset are more than 50 percent very early in the first half.

Things are slightly different in big upset situations; the underdog must wait until the second half for a modest lead (4 to 6 points) to trump the seedings.5 If, however, you’re watching a game in which a big underdog has a three-possession lead in the first half, keep watching because there’s a good chance that it’ll pull off the upset.

In smaller potential upsets, an underdog with at least a 4-point lead (light and dark green) at nearly any point in the game has a better chance of winning than losing. The underdog wins about 40 percent of one-possession games (gray), regardless of the time remaining.

So, as you watch games, don’t get too excited about a big underdog with a small lead, at least until the second half. If there is not a big gap in the seedings between the two teams, then the scoreboard, not the seedings, is what matters. And remember, this whole analysis is the aggregation of hundreds of games. Any one particular game can certainly defy the odds.

Stephen Pettigrew is a Ph.D. candidate in the Harvard Department of Government. In addition to studying American politics, Stephen writes about sports analytics on his blog, Rink Stats. @rink_stats