One big question about 2020 is whether President Trump will face a serious primary challenger for the Republican presidential nomination. So far, the competition is limited. Only one potential opponent has formally launched an exploratory committee — former Massachusetts Gov. Bill Weld — but there’s speculation that Maryland Gov. Larry Hogan might mount his own challenge to Trump.

At this stage, this is good news for Trump. Arguably, neither Weld nor Hogan would pose that much of a threat. After all, Trump’s approval rating remains close to 90 percent among Republicans — and in previous instances where a primary challenger has caused more of a ruckus, a president’s approval rating has hovered closer to 70 percent among his own party.

It would be incredibly difficult for a primary challenger to actually defeat Trump and claim the GOP nomination — an incumbent hasn’t failed to win his party’s nomination since the 1800s, and a primary challenger hasn’t ever defeated a sitting president in the modern primary era, which began in the 1970s. So if a credible opponent does emerge, it may make more sense to judge the campaign by the relative success of the challenger, such as how many votes the candidate wins and whether he or she makes enough trouble to play a major role at the Republican National Convention. In other words, we can better understand just how serious — or not — a challenge to Trump is by comparing it to past primaries against incumbent presidents.

So we built a rough “Primary Challenge Success-O-Meter” that looks at primary challengers from the past to better gauge how 2020 challengers could rate.

Or: The Wolfe wipeout

Let’s start by taking a look at the most common type of presidential primary challenger: the forgettable “Who’s that?” candidates. They tend to be perennial or no-name candidates who make the ballot in a handful of states and win just a sliver of the national primary vote. In each presidential cycle, at least a couple of these candidates run against the sitting president, but those runs don’t indicate that the incumbent is any danger of losing renomination.

One recent example is John Wolfe, who won a little over 1 percent of the national primary vote against Barack Obama in 2012 while making the ballot in five states.1 Wolfe’s most notable moment in the campaign was the Arkansas primary, where he won 42 percent of the vote in a head-to-head race with Obama, demonstrating opposition to the president among some Democrats in the South. There could be some similar nobodies running against Trump in 2020 — besides the president, 70 Republicans have so far filed paperwork with the Federal Election Commission to run for president. It remains to be seen how many of them will truly campaign and qualify for state ballots.

Or: The Buchanan bother

A primary challenger at this level still has little chance of winning the nomination and likely won’t even win a single primary contest. However, this candidate could build a national political organization and win a not-insignificant chunk of the primary vote, or at least enough to force a conversation about the direction the party is headed.

Take Pat Buchanan in the 1992 Republican primary campaign against President George H.W. Bush. Buchanan made the ballot in more than 30 states that held primaries and won 23 percent of the national popular vote to Bush’s 72 percent. He didn’t win a single primary, but he embarrassed Bush in New Hampshire by winning 37 percent of the vote there. And even more impressive, Buchanan’s populist campaign earned him a prime-time speaking slot at the 1992 Republican National Convention. His speech famously added the term “culture war” to the American political lexicon and helped position Buchanan for his second presidential bid in 1996.

A Hogan or Weld run, assuming they happen, would most likely fall into this category. Hogan is one of the most popular governors in the U.S., and some anti-Trump Republicans want him to run. But there isn’t a clear electoral path for Hogan. Even in Hogan’s home state of Maryland, Trump has an approval rating of around 70 percent among Republicans. As for Weld, he hasn’t held public office in the last 20 years, so his campaign might hover between Level 1 and Level 2. 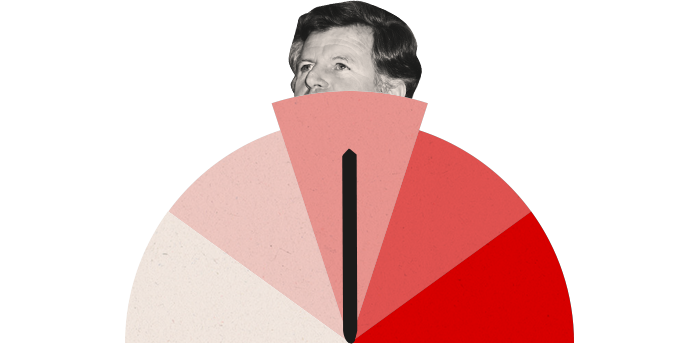 Level 3: Could be trouble

Or: The Kennedy kneecap

Now things are getting interesting. A Level 3 candidate could indicate the president’s position is genuinely weak even if the challenger ultimately falls short of the nomination. This is a candidate who wins primary contests against the sitting incumbent and earns a sizable share of delegates at the national convention.

In the modern era, only Massachusetts Sen. Ted Kennedy has mounted a Level 3 challenge. In 1980, Kennedy won 37 percent of the national Democratic primary vote — including some big states like California, New York and Pennsylvania — when challenging President Jimmy Carter for the nomination. At the convention, 35 percent of the delegates cast ballots for Kennedy while 64 percent voted for Carter. To put that in perspective, 98 percent of delegates voted for Obama at the 2012 Democratic convention.

Given Trump’s current position, this level may be the best a challenger could hope for in 2020. Such a candidate could actually get some results and might have a chance to give a major convention address that steals the show, the way Kennedy’s “The Dream Shall Never Die” speech did in 1980.

Or: The Reagan red alert

In the 1976 Republican nomination contest, former California Gov. Ronald Reagan mounted a primary challenge that nearly toppled Ford. Reagan won 46 percent of the national Republican primary vote to Ford’s 53 percent, and going into the convention, neither candidate had a majority of delegates, leaving the nomination in doubt. In the end, Reagan fell short, but Ford only narrowly won, garnering just under 53 percent of delegates (1,187 to Reagan’s 1,070) on the convention’s first ballot.

It’s hard to imagine a Reagan-esque challenge in the 2020 GOP primary, largely because Ford’s position was so unusual. Ford hadn’t been elected president, but had been elevated to the role when President Richard Nixon resigned amid the Watergate scandal. In fact, Ford hadn’t even been elected vice president — he was appointed by Nixon when previous Vice President Spiro Agnew resigned after being caught up in a scandal of his own. Furthermore, Reagan was a formidable opponent. He’d built up a national reputation as a conservative spokesman and then as California’s governor, while also seeking the GOP presidential nomination in 1968. In 1980, when Reagan finally had his chance at the top of the Republican ticket, he won the presidency.

Or: The unprecedented upset

No primary challenger has ever defeated an incumbent president in the modern primary era, so if a candidate were to defeat Trump for the GOP nomination, that person’s name would be inscribed in history books and on the top level of our Primary Challenge Success-O-Meter.

How would this happen? Well, the president’s standing among his own party would probably have to decline significantly; Ford and Carter’s approval ratings were both much lower when they faced their challengers. In 1976, Ford’s approval among Republicans averaged 68 percent during the primary and caucus season, according to data from Gallup.2 In 1980, Carter’s average approval among Democrats was even worse — 56 percent — during the nomination contests.3 Of course, both Ford and Carter hung on to win their party’s nomination, and Trump is currently in much better shape than either of them — his approval rating among Republicans is averaging in the high 80s. But given that the current political environment is far more polarized and the parties are far more ideologically sorted — meaning more liberal people are Democrats and more conservative people are Republicans — comparing Trump’s intraparty approval to that of Carter or Ford is a bit apples to oranges.

Primary polls suggest that at least some GOP voters would consider a primary challenger running against Trump, so his high approval numbers may mask the true potential for an opponent to gain a foothold. Nonetheless, any Trump challenger would face a difficult path to the nomination. While some of the party faithful may have issues with the president, most of them likely prefer him to the possibility of a Democrat getting elected. Plus, should Trump win the nomination but lose re-election, a challenger may not want to be blamed as a contributing factor.

We are a long way from the 2020 primaries, and not only do we not know if Trump will have a serious challenger, we also don’t even know what the final primary calendar will look like. But once voting starts next February, the Primary Challenge Success-O-Meter can help us better understand just how well a Trump opponent is really doing.