Last month, we asked FiveThirtyEight readers to participate in a crowdsourced experiment. We wanted to find out when people show up to parties — how late is fashionably late? And we asked hosts to record, either by stopwatch or sign-in, when guests arrived.

And boy, did they deliver. We got detailed data from 26 parties held in September and early October. We got everything from book clubs to toga parties to dinner parties to good old-fashioned degenerate ragers. We got Europeans, Americans and Canadians. All told, we got data points for 803 guests. 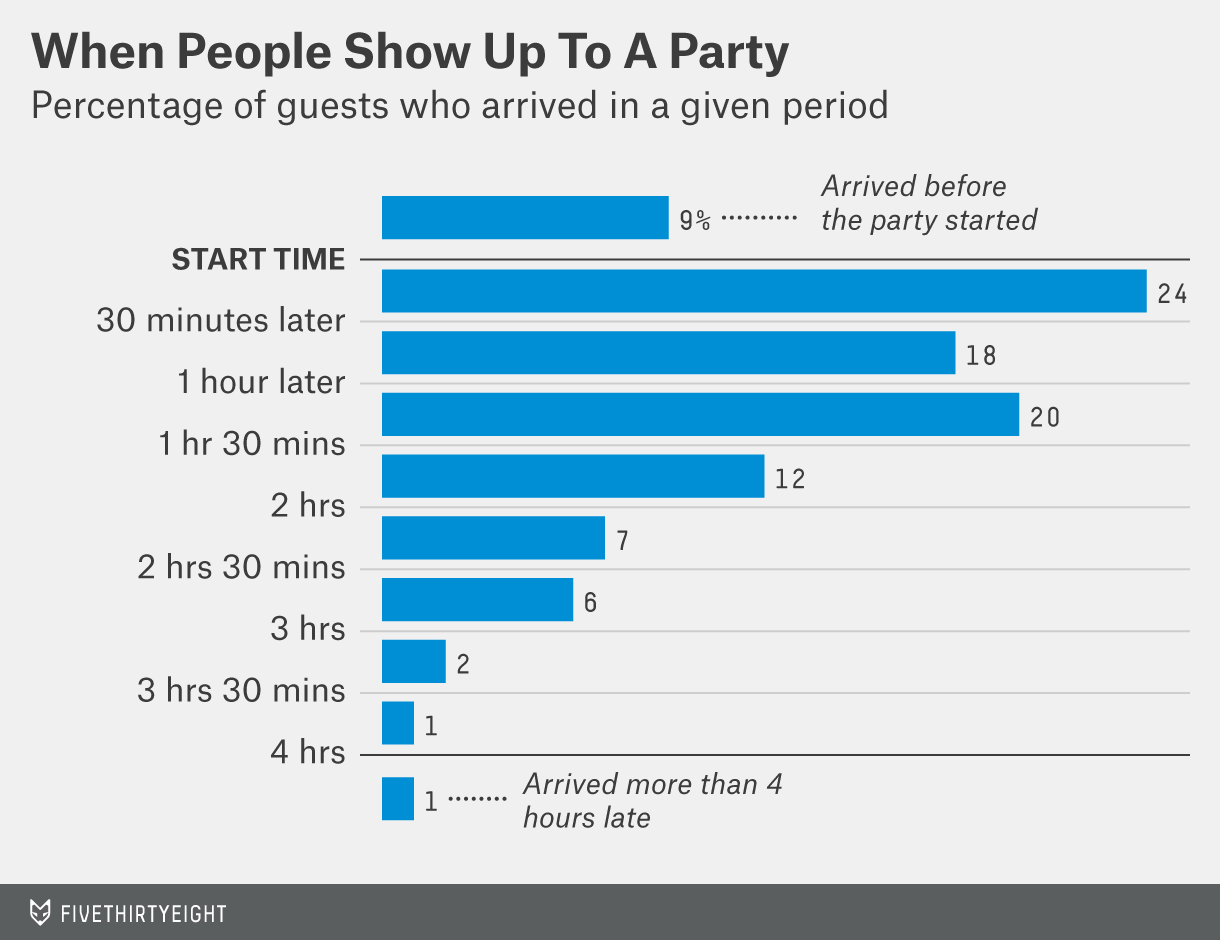 But if that seems to skew late — and it does — we can also dive into the data based on the number of attendees. The median number of guests at each party was 23 people. When we look at parties with 23 or fewer attendees, the median arrival time — that is, when the middle person showed up at the party — was 29 minutes late. For parties of 25 or more — your ragers, throw-downs, events with a keg — the median arrival time was 70 minutes after the designated start time.

Here’s what that breakdown looks like when you divide the parties by size: 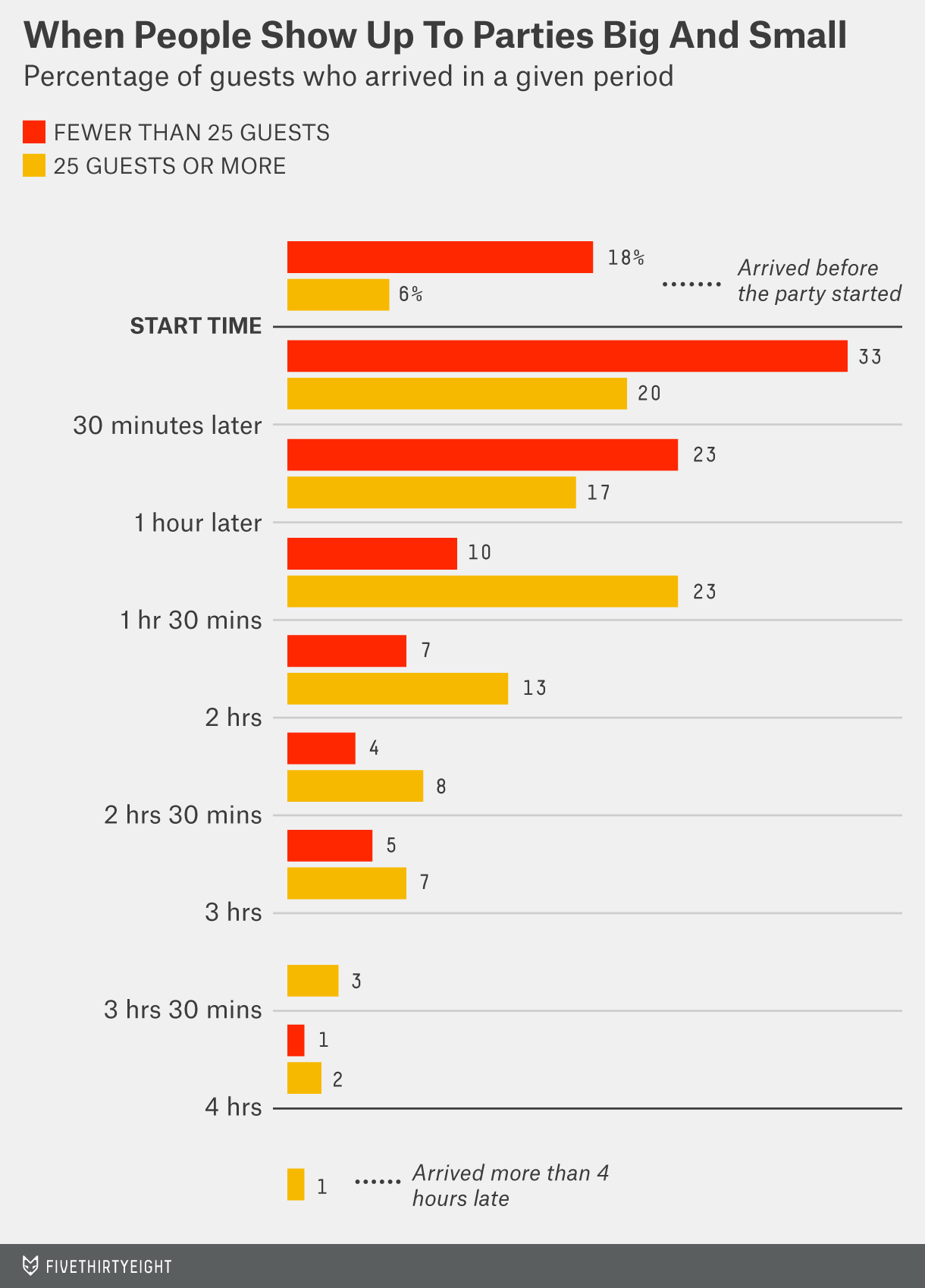 So there appears to be a relationship between when people show up and the eventual size of the soiree. That makes sense. I’d happily be an hour or two late to a huge frat party in college, but I take special care to show up promptly to a small dinner party with friends. Here’s what happens when we plot the median arrival against total number of guests: 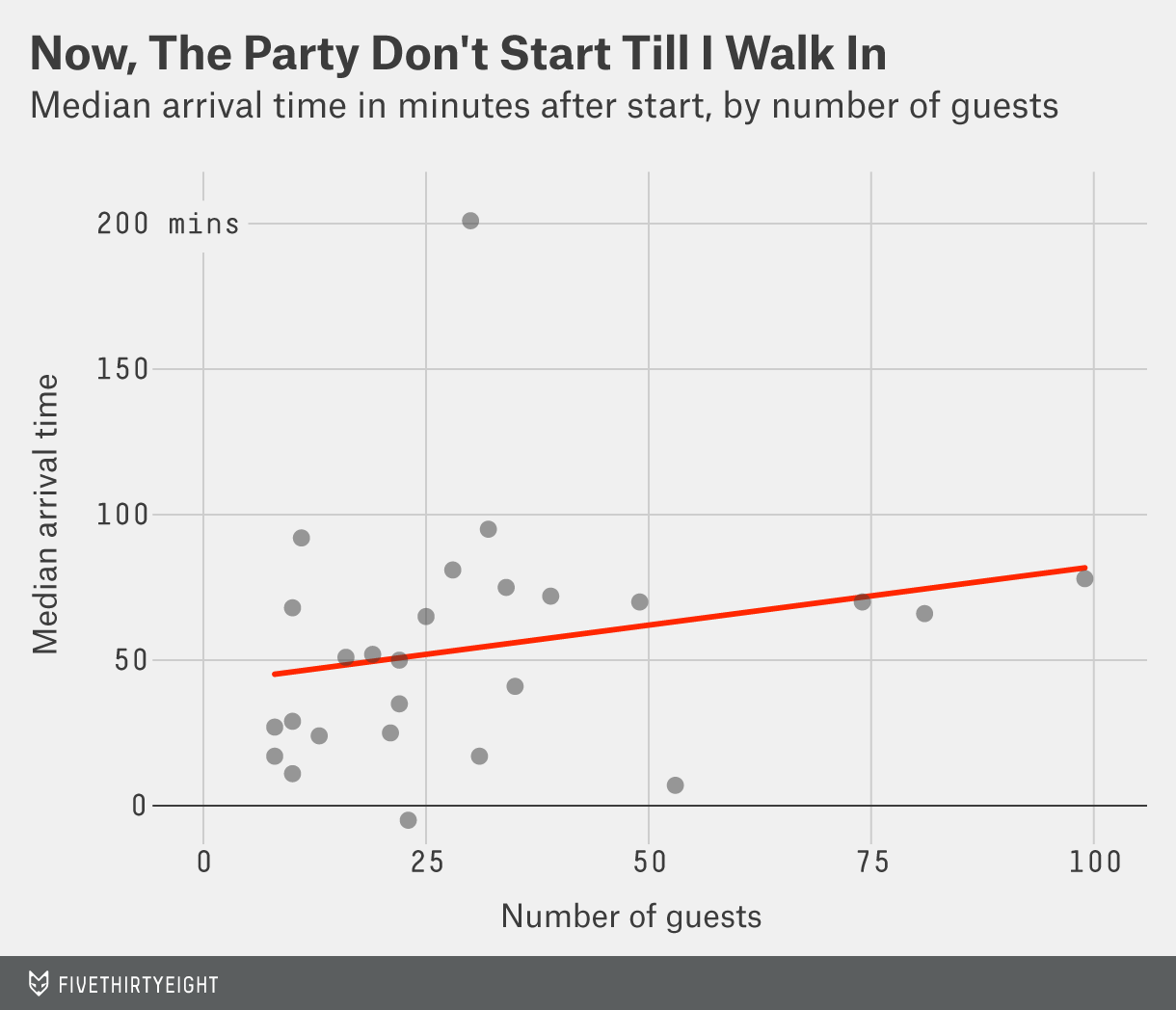 We have a slightly upward trend. The linear regression equation is this:

The r-squared isn’t too hot — 0.053 — but here’s how we can interpret this equation if we’re looking to develop a quick rule of thumb (provided you have an idea of the eventual turnout). This estimates the middle guest will arrive 42 minutes in, plus an additional 4 minutes for every 10 people attending. So for a party with 50 people, we’d expect the median guest to show up 62 minutes after the advertised start time.

So does this mean that guests have a free pass to show up that late to a party? I spoke to Lizzie Post, a co-author of the 18th edition of Emily Post’s Etiquette, and the answer, in no uncertain terms, was no.

“You should show up to a party on time,” said Post. “I don’t recommend showing up late ever. It’s not appropriate.” The first half-hour, Post said, is the general arrival period. But it’s not good etiquette to plan to be late. This reflects poorly on the two-thirds of guests in our data set who showed up 30 minutes or more after the party’s start.

Still, Post agreed that these rules generally applied more to smaller events, and our readers’ results reflect that.

“The smaller the party, the more important it is to show up on time,” Post said. For a college kegger, for instance, “it might not matter if you go at all.”

Post’s advice for the perennially late is to give the host a ring beforehand to let them know. And I was somewhat surprised that many of the people who sent in data explained their outliers by saying just that: The people who showed up super-late called before eventually arriving.

If there’s a takeaway it’s probably this: Show up whenever you feel like it to a huge, anonymous kegger where you barely know the host. But if it’s a smaller party — and you were personally invited — you’ll be in the better half of guests if you show up within a half-hour of the advertised start. And if you’re going to be late, call.

We’ll post the (anonymized) data used for this project on our GitHub page soon. In the meantime, one group of engineers from the University of California, Davis, sent in their own analysis of their party.