It’s hard to know whether the indictment of a bunch of FIFA officials by the U.S. Justice Department on Wednesday will be the first step toward a less corrupt FIFA — or the beginning of its end. On Thursday, Michel Platini, president of the European football federation UEFA, said its 54 countries might quit FIFA if Sepp Blatter is re-elected as FIFA president. Indeed, since FIFA inexplicably awarded the 2022 World Cup to Qatar, some of the world’s most well-off footballing nations have considered going rogue.

Other organizations, including the presidents of the African and Asian football federations, have publicly backed FIFA and Blatter since the indictments. But the UEFA threat is potentially a credible one. The European countries and a handful of others — Brazil, Mexico, United States, Japan and China — have a lot of economic leverage over soccer’s future. They’re disproportionately responsible for bringing revenues into FIFA, while FIFA’s current organizational structure, which gives Bahrain as much voting power as Brazil and distributes development funds about equally by country instead of in proportion to population or GDP, doesn’t give them much back.

FIFA claims to make about 90 percent of its money by selling licensing rights to its quadrennial men’s World Cup, the plurality of which comes through television licensing fees. There isn’t a lot of reliable reporting on exactly what networks around the world pay to televise the World Cup.1 However, we can come to some reasonable estimates of how lucrative each country’s TV market is.

Following the 2010 World Cup in South Africa, FIFA published detailed data on how wide an audience the World Cup reached on television in different countries. (FIFA has yet to report this data for the 2014 World Cup.) FIFA’s data is quite comprehensive, listing the size of TV audiences for more than 170 countries.2 All I’m going to do is take FIFA’s estimate of television viewers3 in each country and weight it by that country’s per-capita, purchasing-power GDP.4 This reflects that, for better or worse, a viewer in a country with high disposable income is more valuable to sponsors than one from a developing nation, making the wealthier nation’s TV rights more lucrative.

The 2010 World Cup reached more viewers in China than anywhere else, according to FIFA’s data. When viewers are weighted by GDP, however, the United States comes out slightly on top. Although the U.S. had slightly below-average World Cup viewership relative to its population,5 its large, wealthy population was enough to make up for that. In total, it represented 11 percent of the GDP-weighted audience for the 2010 World Cup, followed by Japan (9 percent), China (7 percent), Germany (6 percent), Brazil (5 percent), and the United Kingdom, Italy and France (4 percent each). Those eight countries alone accounted for more than half of the GDP-weighted World Cup audience. (You can see these figures for all countries that represented at least 0.5 percent of the GDP-weighted audience in the table below, or download them for all countries at GitHub.) 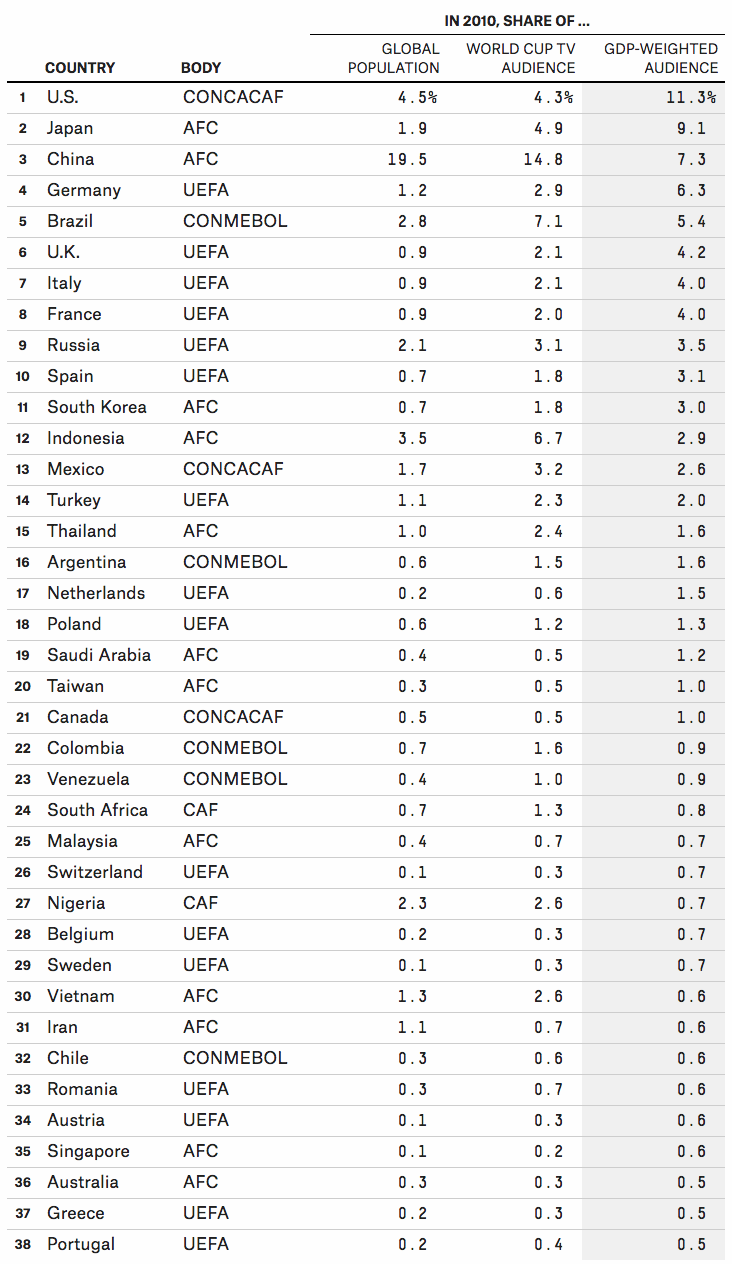 We can also aggregate these numbers by each of FIFA’s six continental confederations and compare them to the share of FIFA members each confederation has. In 2010, African countries represented about 25 percent of FIFA members but (even though the World Cup was played in Africa) only about 3 percent of the tournament’s GDP-weighted TV audience. By contrast, Asia and South America are underrepresented in FIFA. So is UEFA if you measure it by its GDP-weighted TV audience, although not if you measure it by population.

You can argue, of course, that it isn’t a bad thing for FIFA to give more representation to developing countries. I’d have a few counterarguments to make. First, it doesn’t square with FIFA’s decision to give the 2022 World Cup to Qatar, which has the world’s highest per-capita GDP by some estimates. And second, as my colleague Carl Bialik wrote this week, FIFA’s governing procedures happen to suit the interests of the plutocrats who run it very well.

Furthermore, these figures reflect viewership for the World Cup, as opposed to club football, where a few countries are even more responsible for bringing an audience to the game and cultivating the world’s soccer talent. Of the 736 players on the roster for the 2014 World Cup, 563 (or 76 percent) played their club football in a UEFA country. Relations between the European club teams and FIFA are already tense, in part because a winter World Cup in Qatar would require interrupting the club season. (FIFA compensates the clubs for releasing their players for international matches, which they are not required to do.)

So how many countries would need to defect from FIFA to break it? UEFA represents 39 percent of the GDP-weighted World Cup audience; that’s a start. But it also includes some countries whose interests don’t always align. Russia, in particular, is extremely unlikely to break from FIFA, having been awarded the 2018 World Cup (Russian President Vladimir Putin responded to the indictments by accusing the U.S. of trying to derail Blatter’s re-election). And having European nations only would mean there couldn’t be a transcontinental competition to rival the World Cup.

But what if you used the 34 OECD members as the foundation of a new football federation? The OECD doesn’t include Russia but does have most of the large European economies, including Germany, the U.K., France, Italy and Spain. It also has the United States and a foothold in the Asia-Pacific region (Japan, South Korea, Australia) and Latin America (Mexico, Chile). These OECD members account for more than 60 percent of the GDP-weighted World Cup audience and about 80 percent of the club-team representation in the 2014 World Cup.

Convince Brazil and Argentina to join the breakaway foundation, and you’re doing even better. You’d be up to almost 70 percent of the GDP-weighted World Cup audience, and you’d have 11 of the 16 countries that advanced to the knockout stage of last year’s World Cup. You’d have more than reached critical mass, and you’d probably have your pick of whichever other countries — Colombia, Nigeria, New Zealand — wanted to flee FIFA.

It probably won’t happen; it’s probably just a bluff. But there are some parallels to the formation of the English Premier League, which occurred in 1992 when teams from England’s First Division resigned en masse from the then-104-year-old Football League to take advantage of a favorable TV deal. In the end, the change was relatively seamless from the fan’s point of view6 and meant a new period of prosperity for English club football. Institutional power is hard to break, but sometimes money can motivate change.