Regular readers of this blog will know that I’ve been of mixed minds on the electoral prospects of former Gov. Tim Pawlenty of Minnesota. I’ve gone from initial skepticism about his chances to defending him as a “top-tier” candidate while some other analysts downgraded his status.

Both the pro-Pawlenty and the anti-Pawlenty arguments are relatively straightforward. The pessimistic case is that he doesn’t really stand out from the pack on the basis of personality, accomplishments or what we might think of as his “brand.” The optimistic case is that he’s broadly acceptable — he has traditional qualifications, he’s well positioned between the moderate and conservative factions of the Republican Party and his favorability numbers are relatively good.

Really, though, I’m not sure that these arguments are incompatible: part of the reason that Mr. Pawlenty does not stand out is that he does not have a lot of sharp edges. The question is how to regard someone with this profile when he’s in competition with a dozen other actual or potential choices.

I’ve sometimes taken a visual approach toward the Republican field, where the positions of the candidates are plotted out based on whether they are perceived to be conservatives or moderates, and insiders (establishment candidates) or outsiders (insurgent candidates). If we drew a chart like that right now, removing candidates who seem unlikely to run or who are unlikely to have much influence even if they do, it might look something like this: 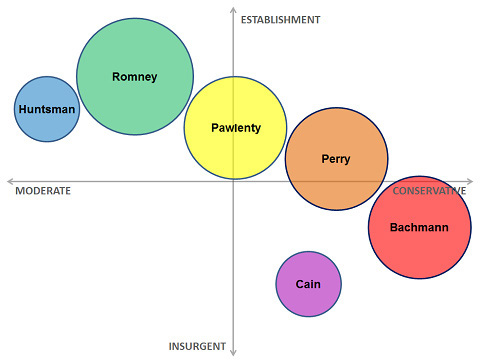 Viewed in this way, Mr. Pawlenty’s prospects might seem relatively bright. He’s pretty much smack-dab in the middle of the field — to the right of Mitt Romney and Jon M. Huntsman Jr., but to the left of Michele Bachmann and Rick Perry (who has not officially entered the race yet but is reasonably likely to do so). Some other candidates who had the potential to occupy this space — say John Thune or Haley Barbour or Mike Huckabee or Mitch Daniels, although some of these candidates are more difficult to characterize than others — have chosen not to run.

But this representation is too simple. Instead, the candidates encroach on one another’s territory: Mrs. Bachmann’s voters might plausibly also consider Mr. Perry or Herman Cain, while Mr. Huntsman’s might consider Mr. Romney.

All of the candidates suffer from this issue to a certain extent and would rather have fewer opponents to run against. But the concern for Mr. Pawlenty is that, because he sits so close to the middle of the field, he has more competition to worry about. Whereas he’s obviously in direct competition with Mr. Romney, his campaign has also had some pointed things to say about Mrs. Bachmann.

(This could plausibly be tested empirically: it might be the case, for instance, that voters who said they viewed Mr. Pawlenty favorably also gave a favorable rating to an average of four other candidates, whereas those who liked Mr. Cain tended to view him as among the only acceptable alternatives. This might explain why Mr. Pawlenty’s “horse race” numbers are poor even as his favorability numbers are relatively good.)

What a candidate like this needs is a good marketing strategy. Because someone like Mr. Pawlenty doesn’t distinguish himself on the basis of the fundamentals, he instead needs to stand out on the basis of superficial factors. Think about other products that are poorly differentiated from one another, like Coke or Pepsi or Bud Light and Miller Lite. These are the products that tend to invest the most into their marketing budgets — Budweiser spends hundreds of millions of dollars every year trying to convince you that it’s a better brew than Miller, even though most beer drinkers would have trouble telling them apart.

It might not be that a candidate’s branding is inherently all that important — but it’s going to tend to be more important for a candidate like Mr. Pawlenty than for one like Ron Paul, who has a more eccentric set of political views and is more of an acquired taste. Mr. Paul is the equivalent of a microbrew like Dogfish Head. Dogfish Head certainly stands to benefit from making sure that it is available in stores and that consumers are aware of its presence — but it does not really have to convince drinkers that it tastes better than Budweiser, as any drinker who might plausibly choose it is already of that opinion. Mr. Pawlenty, on the other hand, has to compete against the big brands — and the risk is that he’ll become the next Schlitz or RC Cola.

And so far, indications are that Mr. Pawlenty is losing the marketing war. The polls are one sign: contrary to what you might read elsewhere, they do have some predictive power, and what’s especially troubling for Mr. Pawlenty is that his numbers have not really improved even has his name recognition has grown to about 60 percent from 40 percent.

The other sign, perhaps just as important, are the fund-raising numbers: Mr. Pawlenty brought in just $4.2 million in the most recent quarter, some of which is earmarked for the general election, a paltry sum as compared to other candidates both in this election and in other recent ones. Not only do the fund-raising numbers have some predictive power unto themselves, but they also mean that Mr. Pawlenty will have less of a marketing budget as we move forward.

By no means do I think that Mr. Pawlenty has become an unrealistic nominee: at worst, he has fallen a little bit behind Mr. Perry and Mrs. Bachmann (and a ways behind Mr. Romney). But the question is whether he needs to rebrand himself, taking more of the posture of the underdog.