The Baseball Hall of Fame will announce this year’s voting results Tuesday afternoon, but clever denizens of the Web have a head start on the process. For the past few years, the analytically inclined corner of the sports world (spearheaded by Baseball Think Factory and other sites) have counted the votes from media members who announced their ballots ahead of time — a contingent that includes more than a third of all voters as of Tuesday morning. The most recent projections can be found here.

Since the Baseball Hall of Fame Vote Tracker project began in 2009, the early returns have corresponded remarkably well with the voting results: 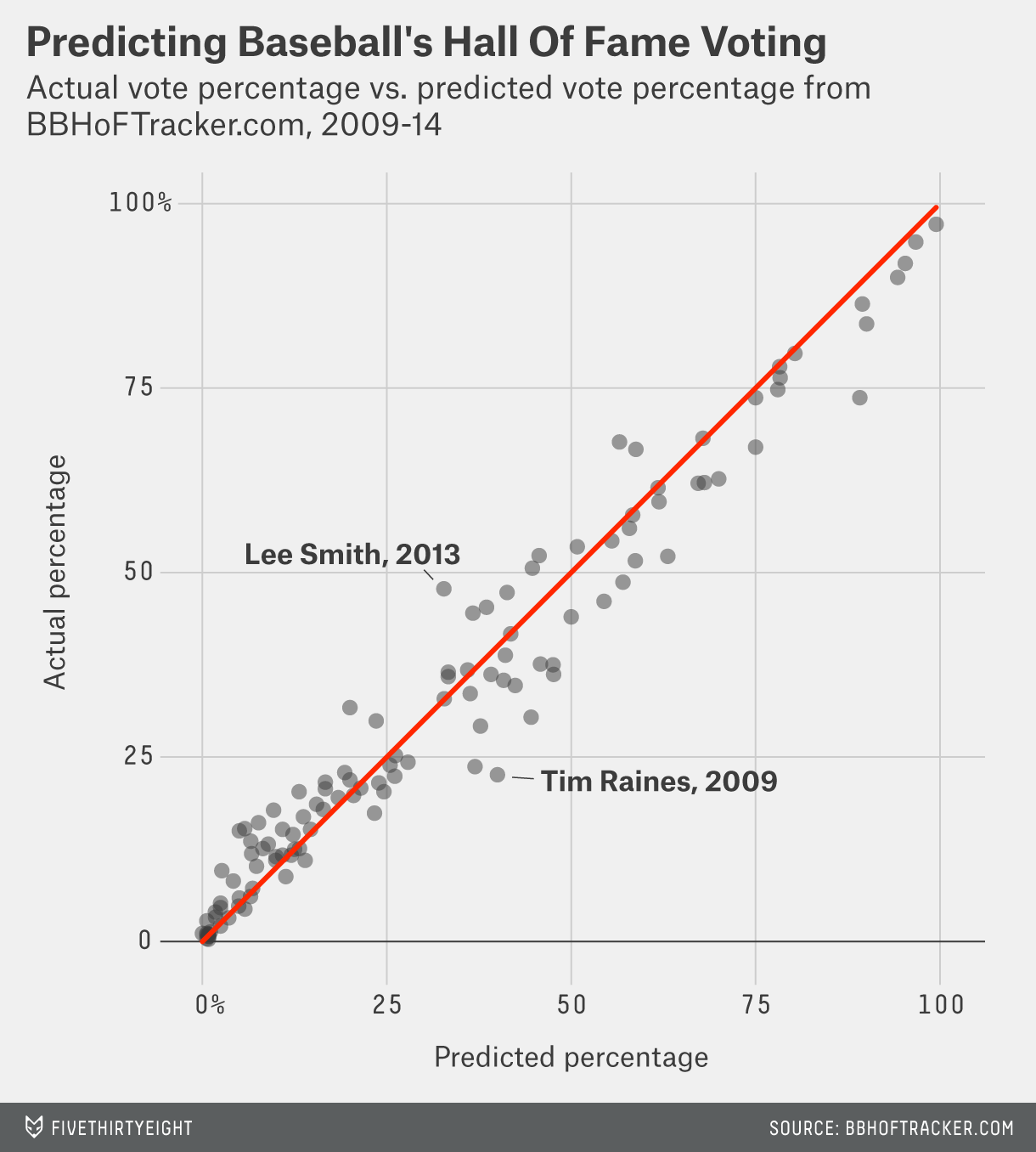 There are some inconsistencies, however. For example, the subset of voters who release their ballots ahead of time tends to align more closely with progressive baseball philosophies, such as the use of advanced metrics and the acceptance of players implicated for using performance-enhancing drugs.

That’s why a player such as Mike Piazza, whose legacy has been clouded by vague PED rumors, may fall short of the 75 percent vote threshold needed for induction despite the exit polling listing him near 76 percent Tuesday morning. Or why Tim Raines, who stakes a not-insignificant portion of his claim to the hall on the basis of a strong wins above replacement (WAR) tally, probably won’t exceed the 65 percent mark being predicted by the HoF Tracker.

Interestingly, after controlling for WAR and steroid allegations, the voters who fail to make their preferences known ahead of time also have been biased against players whose hall case is unusually tied up in the Hall of Fame Standards metric, which measures career longevity and milestone accumulation. This means non-disclosing voters tend to weigh a player’s peak contributions more heavily than his overall body of work.

But even among the known ballots, there are some interesting hints as to how the nonpublic voting will shake out. Noting a rather visually arresting bifurcation among voters, sabermetric impresario Tom Tango has suggested this clustering effect is due to voters being highly polarized on a few hot-button issues. For instance, voters who selected Barry Bonds were very likely to also select Roger Clemens; meanwhile, voting for Fred McGriff or Lee Smith was strongly associated with not putting Bonds or Clemens on a ballot.

Those numbers reflect generational differences between voters that will take center stage when we compare the HoF Tracker’s predictions to the voting results.

UPDATE (Jan. 6, 3:59 p.m.): On Tuesday afternoon, the Hall of Fame announced that four players had been inducted: Randy Johnson, Pedro Martinez, John Smoltz and Craig Biggio. The players with the biggest deviations between actual voting percentage and the HoF Tracker’s predictions were Curt Schilling (whose actual share was 12.3 percentage points lower than his predicted share), Mike Mussina (11 percent), Raines (9.9 percent) and Lee Smith (whose actual voting percentage was 9.4 points higher than expected). As expected, Piazza also lost too many votes once the private ballots were accounted for; his voting percentage dropped from 76.2 percent in the final pre-announcement data to 69.9 percent in the overall tally.