If they could, most NBA coaches would simply play their best players for 48 minutes a game, every game. After all, it’s the stars who largely drive team performance, and most teams are at their best when their best guys are on the floor.

Of course, we know that can’t happen. The science of minutes management is fairly clear, and most teams have taken heed of it. For proof, just look at the rapid decline over the past decade-and-a-half in the number of players receiving 36-plus minutes a night. That used to be fairly standard for a team’s best and even second-best player; nowadays, it’s exceedingly rare. 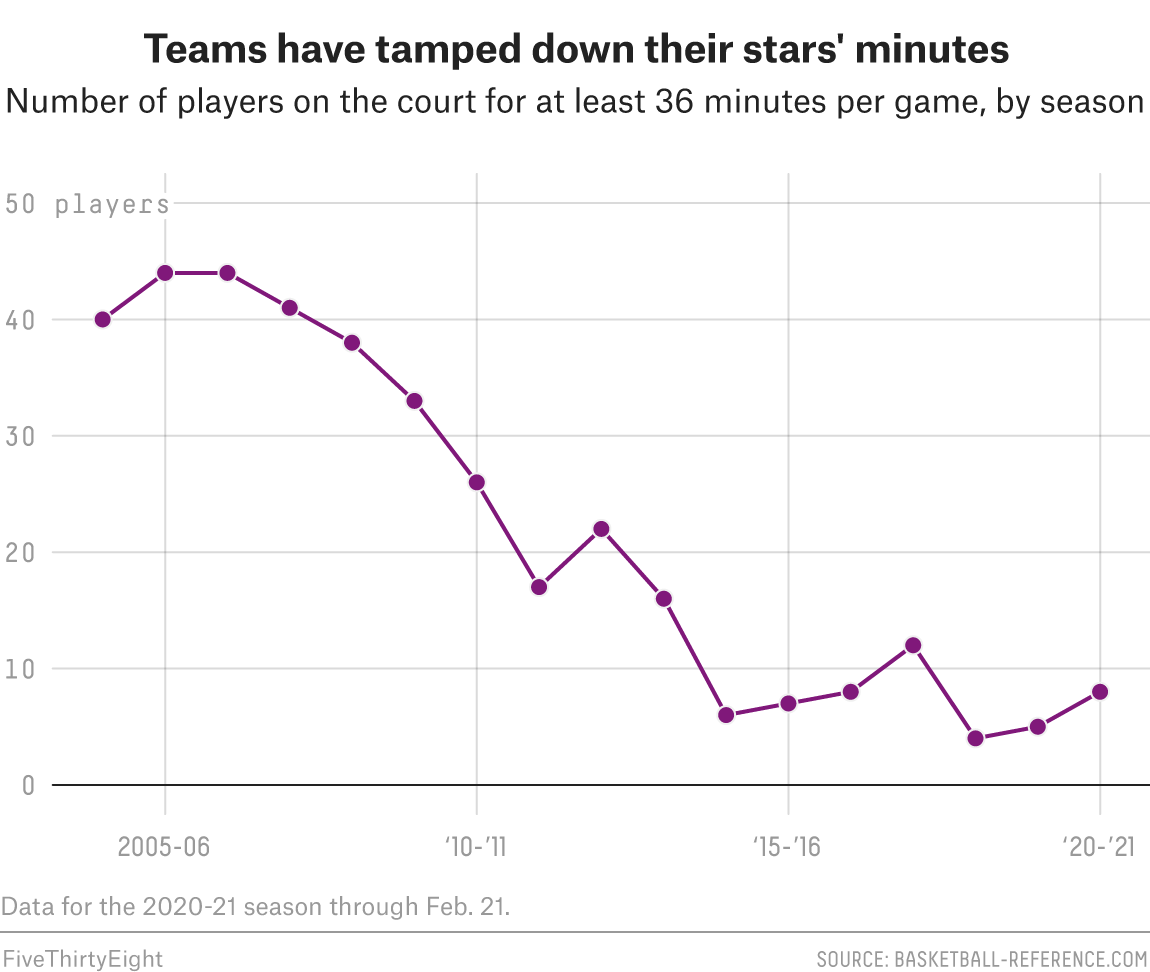 Players spending less time on the floor necessarily means their teams have to make do without them more often. Take LeBron James, for example. During the 2004-05 season, James averaged a league-high 42.4 minutes per game, so his Cleveland Cavaliers had to deal with only around six LeBron-less minutes a night. Fast forward 16 years, and the 2020-21 version of James averages “just” 34.7 minutes a night.1 So the Lakers have to figure out what to do without LeBron on the floor for just under 14 minutes per game.

Considering that the Lakers’ net rating2 drops from plus-9.9 with James on the floor to minus-4.0 with him off it, per NBA Advanced Stats, that’s a pretty significant problem. So, too, is the fact that L.A.’s net rating drops from plus-9.1 to plus-3.0 when James’s co-star, Anthony Davis, leaves the floor. Davis has played an average of 32.8 minutes per game, which means the Lakers also have to deal with about 15 Davis-less minutes a night — at least until his recent injury. For at least the next few weeks, they’ll have to deal without him for all 48.

To avoid overlapping the James-less minutes and the Davis-less minutes, Lakers coach Frank Vogel likes to stagger his two stars in the rotation, as we saw when we looked at rotation patterns through the first 29 games of the 2020-21 season. LeBron and AD typically start together, then LeBron exits sometime around the midway point of the first quarter while Davis stays in the game. LeBron then enters toward the tail end of the first, while Davis comes out. Then, Davis reenters and James leaves again; and finally, they sync up again for the final few minutes of the second quarter. Then, they do the same song and dance after halftime.

Because of this staggering, the Lakers are able to minimize the number of minutes they play with both James and Davis off the floor. In games they have both suited up, per pbpstats.com, they have been on the bench together for only 7.8 percent of the Lakers’ minutes,3 with most of those coming in the fourth quarter of games that were already in hand.

The Lakers’ Staples Center brethren, the Clippers, take the same approach with their two stars, preferring to minimize the amount of time they spend with both Kawhi Leonard and Paul George on the bench. There’s good reason for them to do so: The Clippers have been outscored by 1.59 points per 100 possessions with both of their stars on the sideline, while they have dominated opponents with both players in the game and soundly outscored them with at least one of the two on the floor.4

Of course, staggering isn’t the only way to go. Some teams prefer to attach their stars in the rotation, maximizing the amount of time they spend on the floor together — even if it means the team has to play with both of them on the bench more often than is ideal. There’s perhaps no better example of this than in Golden State.

The Warriors have attached Stephen Curry and Draymond Green in the rotation for years — through many iterations of their team. When both are healthy, it is exceedingly rare to see one of them on the floor without the other. 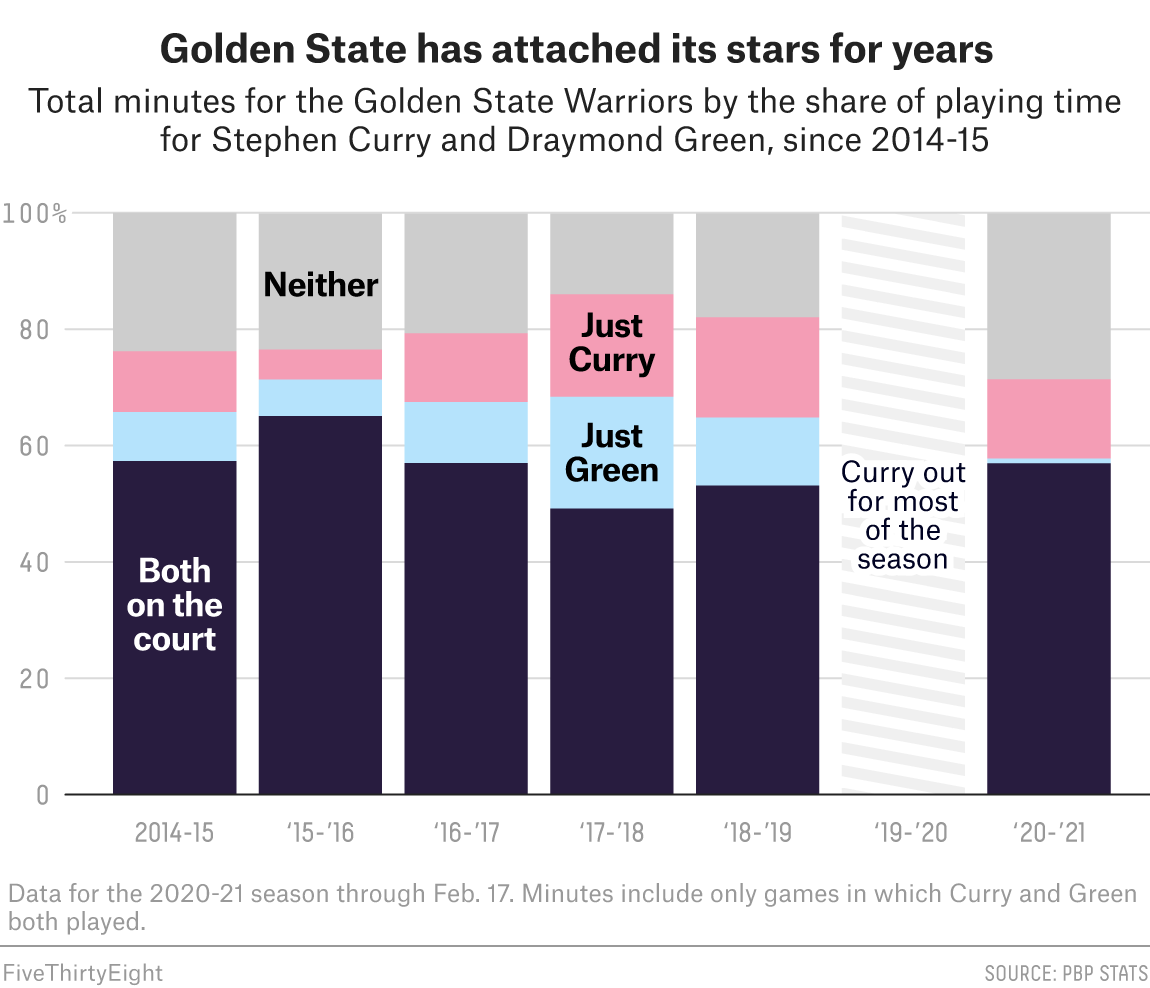 The Denver Nuggets approach things the same way, largely attaching Nikola Jokić and Jamal Murray in the rotation. So great is the chemistry between their two stars, it makes sense to have them spend most of their floor time alongside each other. The configuration with both players on the floor together is also the only one that has outscored its opponents so far this season, though the scoring margins of the other units have been affected by Denver’s recent spate of injuries to supporting players.

Naturally, constructing a rotation gets a bit more complicated if your team has more than two foundational players. With three rotation pillars, a coach has more options. Fully matching three players’ minutes seems somewhat silly. If you can spend somewhere between most and all of the game with at least one of your three best guys on the floor, why wouldn’t you do it? Still, coaches can take different paths to get there.

The Milwaukee Bucks, for example, employ something like a three-man stagger between Giannis Antetokounmpo, Khris Middleton and Jrue Holiday, who each average between 32.5 and 33.8 minutes a night. Antetokounmpo typically exits midway through the first and third quarters, leaving Middleton and Holiday on the floor. He also typically starts the second and sometimes fourth quarters alongside bench units. Meanwhile, coach Mike Budenholzer seems to mix and match which of Holiday and Middleton comes back in to play alongside Giannis for a few minutes before the other returns.5 Helpfully, all of the iterations of these units outscore their opponents, with the exception of the one that has all three stars on the bench, which has rarely been used outside the fourth quarter of games that have already been decided.

Contrast that strategy with that of the Jazz, who match Mike Conley and Rudy Gobert, and stagger that duo with Donovan Mitchell.6 Conley and Gobert come off the floor midway through the first, while Mitchell remains. A few minutes later, they switch, with Mitchell taking his first rest of the game. Mitchell then returns to play a few minutes without his point guard and center, who rejoin him on the floor to end the half. This process typically repeats after halftime, and it works extremely well for the Jazz, who dominate the Conley/Gobert minutes against second units and get by just fine when Mitchell has to play without either of them in the game. Utah can do this because it trusts each of Joe Ingles, Jordan Clarkson and Derrick Favors to pick up the slack in the rotation.

The Raptors take things a step further. Toronto appears to believe it has four core players, as each of Kyle Lowry, Fred VanVleet, Pascal Siakam and OG Anunoby averages between 33.8 and 36.6 minutes per game.

Raptors coach Nick Nurse typically matches Lowry and Anunoby and staggers that duo with VanVleet and Siakam, who are also matched. He’ll also use different combinations of those four players on occasion, though he prefers to have at least two of them in the game at almost all times. It might be advisable for Nurse to mix it up a bit, though, because both the Lowry/Anunoby-only units and the Siakam/VanVleet-only units have negative net ratings so far this season.

The Raptors still have plenty of time to change things up if they want to. It will be fascinating to see if or how this rotation changes now that Anunoby has returned from the calf injury that kept him out of 10 games, especially considering how well Norman Powell fared as a starter in his absence. Because barring injury or some kind of roster move (like a trade or free-agent signing), those changes just don’t happen all that often — at least not for the star players.

Sometimes it takes coaches years to convince players that a rotation should be changed, and sometimes it even takes a new coach to implement that change. Players are creatures of habit, after all, and that extends to the way they flow in and out of the game. That, among other reasons, is why it’s extremely important for coaches to get these decisions right.