Brendan Eich, the co-founder of Mozilla Corp. and its newly appointed CEO, resigned his position Thursday after less than two weeks on the job. Eich stepped down following a controversy over his $1,000 donation in support of Proposition 8, the 2008 ballot measure that banned same-sex marriage in California.

Since Eich became CEO, both Mozilla employees and external groups registered their discontent with his appointment. The dating website OkCupid supplanted its regular landing page for users of Mozilla’s Firefox browser and encouraged them to download another browser instead.

My purpose here is not to weigh in on the ethics of Eich’s resignation or the protests of his appointment (see Andrew Sullivan and Will Oremus for different views on those topics). But I can provide some context about just how unusual Eich’s financial support of Proposition 8 was in Silicon Valley.

The Los Angeles Times maintains a database of contributions for and against Proposition 8. The database includes the names of a donor’s employer, as is required by campaign finance law. I checked the records for some of the largest technology companies in Silicon Valley: specifically those that were in the Fortune 500 as of 2008. The list includes Hewlett-Packard, Intel, Cisco Systems, Apple, Google, Sun Microsystems, eBay, Oracle, Yahoo, Advanced Micro Devices (AMD) and Symantec. I limited the search to donors who listed California as their location.

In total between these 11 companies, 83 percent of employee donations were in opposition to Proposition 8. So Eich was in a 17 percent minority relative to the top companies in Silicon Valley. 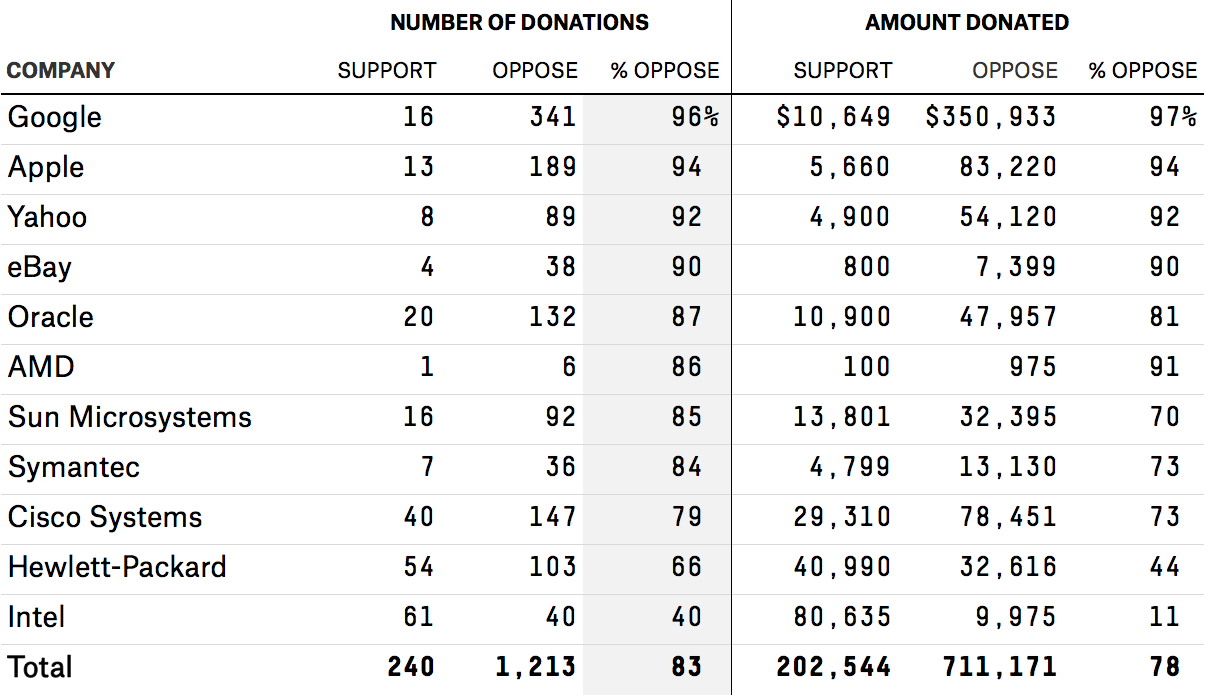 There isn’t much data on Mozilla. Only four Proposition 8 donors listed it as their employer: Eich, who donated in support of the measure, and three others who opposed it. But it’s likely that employee sentiment at Mozilla is much like that at Google. The organizations share a lot in common; Google accounts for a large share of Mozilla’s revenue, and both are based in Mountain View, Calif. Mozilla has a reputation for progressivity, and almost all donations by its employees during the 2012 election cycle were to liberal or libertarian candidates and causes.

These figures, of course, reflect only those employees who were willing to donate publicly for or against Proposition 8, thereby subjecting their names to a search of public records and to the scrutiny of their co-workers. Before resigning, Eich maintained that his views on gay marriage were a private matter.

It’s possible that some Silicon Valley employees donated without using their company’s name. About 12 percent of donations in the Times’ database are listed with “N/A” as the employer. Of these, the overwhelming majority — 95 percent — were made in support of Proposition 8. Most of these reflect unemployed or retired persons, but donors sometimes find creative ways to skirt federal- and state-reporting requirements.