The polling for Tuesday’s presidential primary in Ohio shows a close race. That was not the case in 2008, when 60 percent of Ohio Republicans favored Senator John McCain of Arizona, and 31 percent voted for former Gov. Mike Huckabee of Arkansas. By then, the race was essentially over. Indeed, Mr. Huckabee withdrew the next day.

What is most striking looking at the county-level results from 2008 is the urban-rural divide. Mr. McCain did well everywhere, but he did exceptionally well in and around Ohio’s cities. For an overview of the state’s political landscape, FiveThirtyEight spoke with Professor Joan E. McLean, of the Department of Politics and Government at Ohio Wesleyan University. Professor McLean was also a political adviser to Representative Geraldine Ferraro in the 1980s. 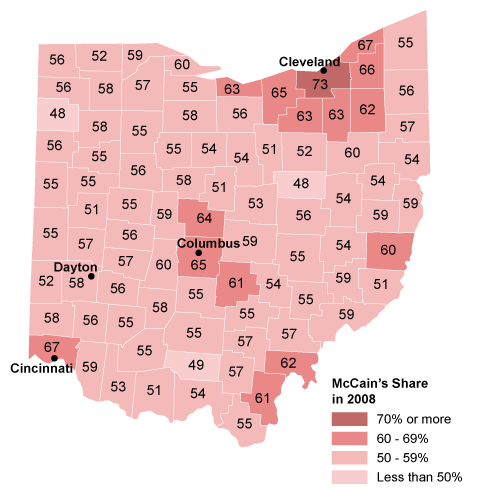 In 2008, Mr. McCain banked most of his votes in the Cleveland area. Mitt Romney had left the campaign before the Ohio primary in 2008, but he’ll likely follow Mr. McCain’s map and show strength in the state’s urban areas. Keep in mind, however, that Ohio has more jobs connected to the automobile industry than any state besides Michigan, and many of these workers are concentrated in Northeast Ohio in Cuyahoga County, which includes Cleveland, and Lake County, just to the north.

Mr. Romney’s widely publicized opposition to the auto industry bailout wasn’t enough to cost him a victory in Michigan. But in order to win Ohio, Rick Santorum will need to keep Mr. Romney’s margins in Ohio’s industrial Northeast to a minimum, and the numerous automobile-industry workers in the region could help him to do that. 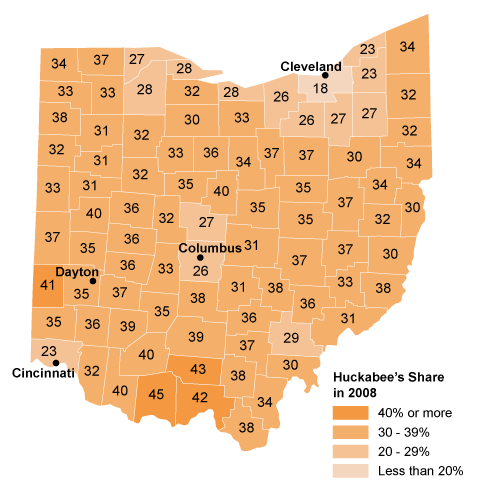 Mr. Santorum’s strength will be in Southwest Ohio, where Mr. Huckabee performed best in the last election. In 2008, 45 percent of Ohio voters described themselves as born-again or evangelical Christians, a group that Mr. Huckabee won, according to exit polls. Ohio’s Southwest, outside Cincinnati, is the most socially conservative region in the state. It is home to a strong anti-abortion movement, and Mr. Santorum, who has criticized other candidates for not addressing social issues more in Ohio, will need large margins in counties like Clermont. 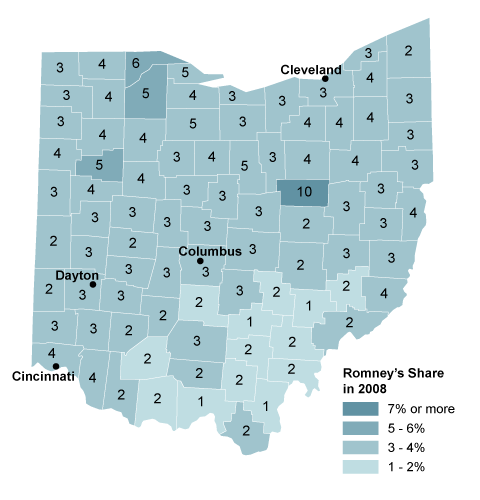 Again, Mr. Romney had withdrawn from the campaign almost a month before Ohioans went to the polls, so his 2008 county-level results are not a great benchmark now. Inexplicably, Mr. Romney did manage to win 10 percent of the vote in Holmes County. 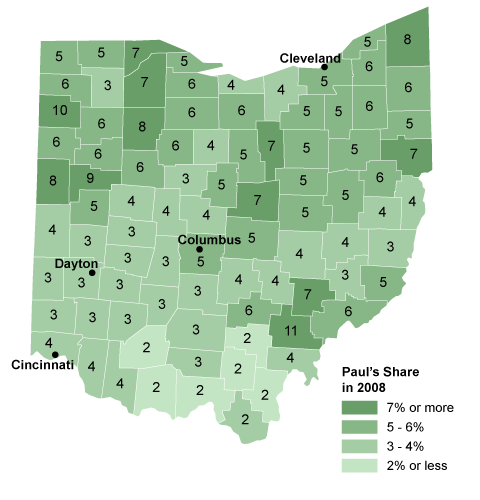 Mr. Paul did best in the northern half of the state, particularly in rural stretches of the Northwest. In states that have already voted, Mr. Paul has easily outperformed his 2008 benchmarks, but his campaign has focused more on winning Super Tuesday’s caucus states compared with delegate-rich primaries like Ohio.