In a squares pool, participants are assigned a pair of single digit numbers on a 10×10 grid — so I’d have 0 and 7, for example. Each pair of numbers corresponds to a square on the grid, and I’d get paid if the Patriots finished with a score that ended in 0 and the Seahawks with a score that ended in 7 — 20, 17, say. Typically, people get paid according to the score at the end of each quarter, as well, to add a little spice to the proceedings.

In most pools, squares are assigned on a random basis, but not all squares are equal in terms of expected value. Football scoring tends to come in chunks of sevens and threes (and, much less frequently, sixes, eights, and twos). As a result, squares containing zero, seven, and three are more valuable than those containing, say, a five or a two.

If you’re in an office squares pool, you probably already know your numbers and may be wondering whether your square is any good. Or perhaps you want to engage in a little pre-game arbitrage with other members of your pool. If so, I’ve calculated the expected value of each square, after each quarter, below. (Expected payouts are derived from the outcomes of over 2,500 games from 10 NFL seasons.) 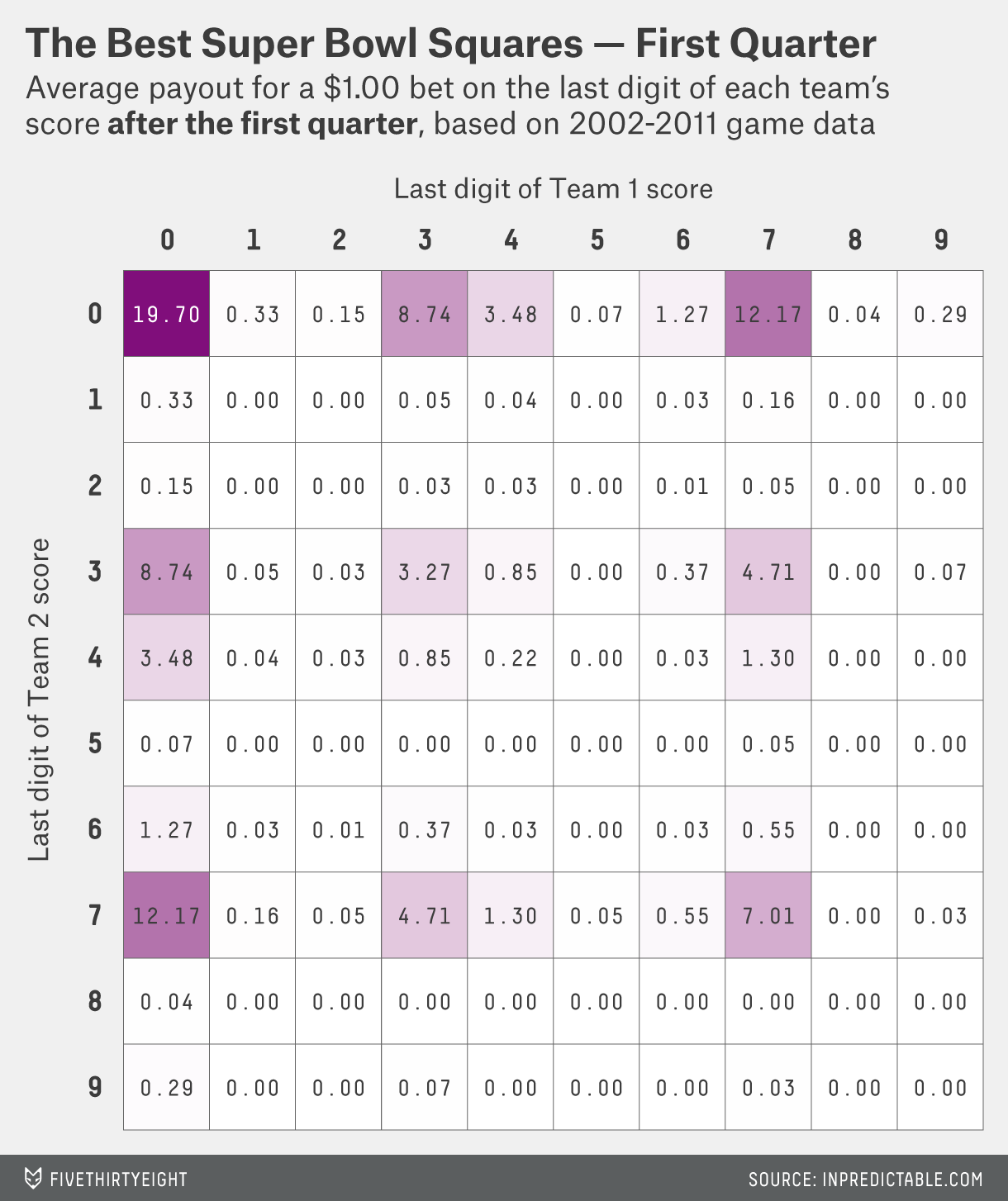 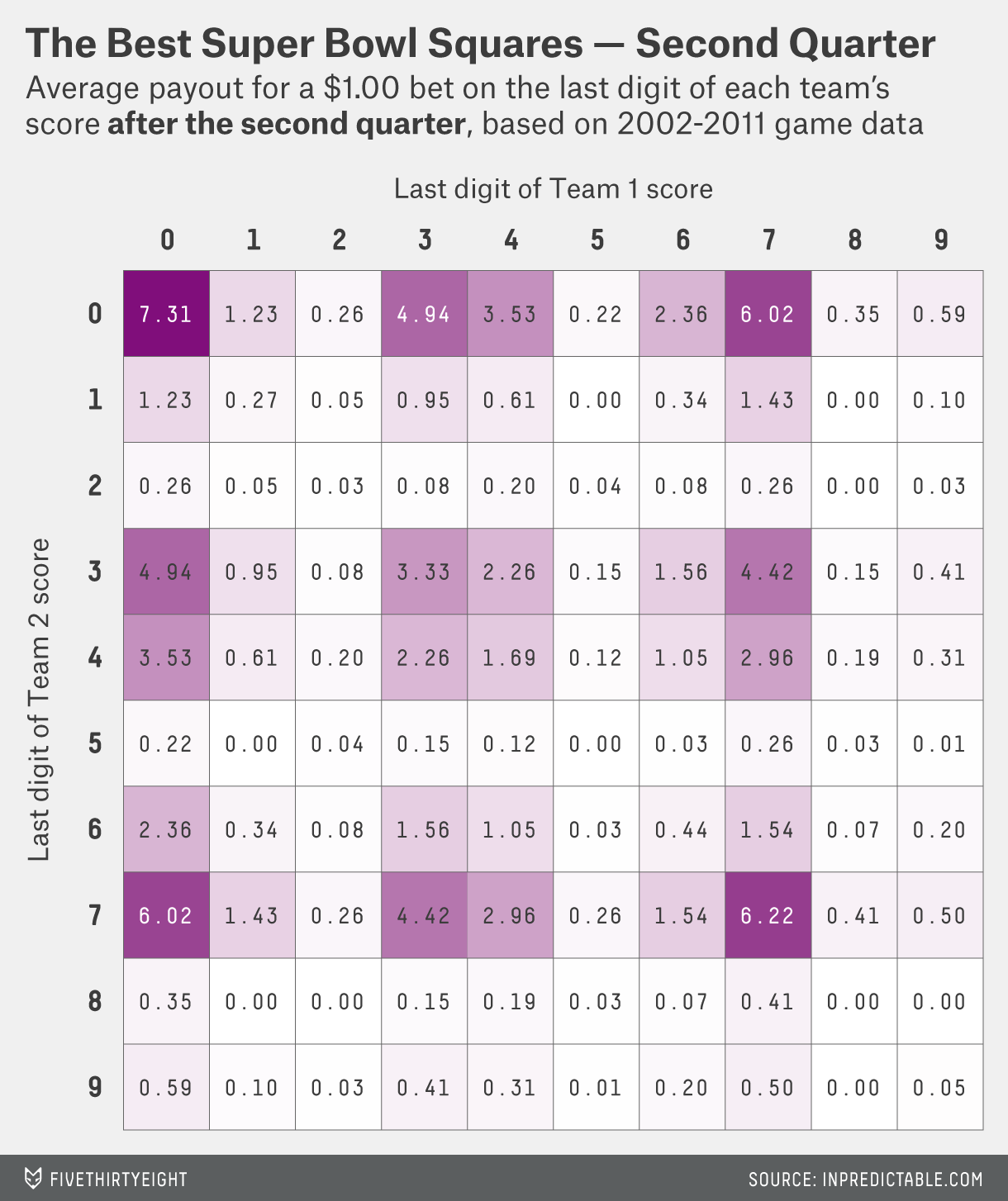 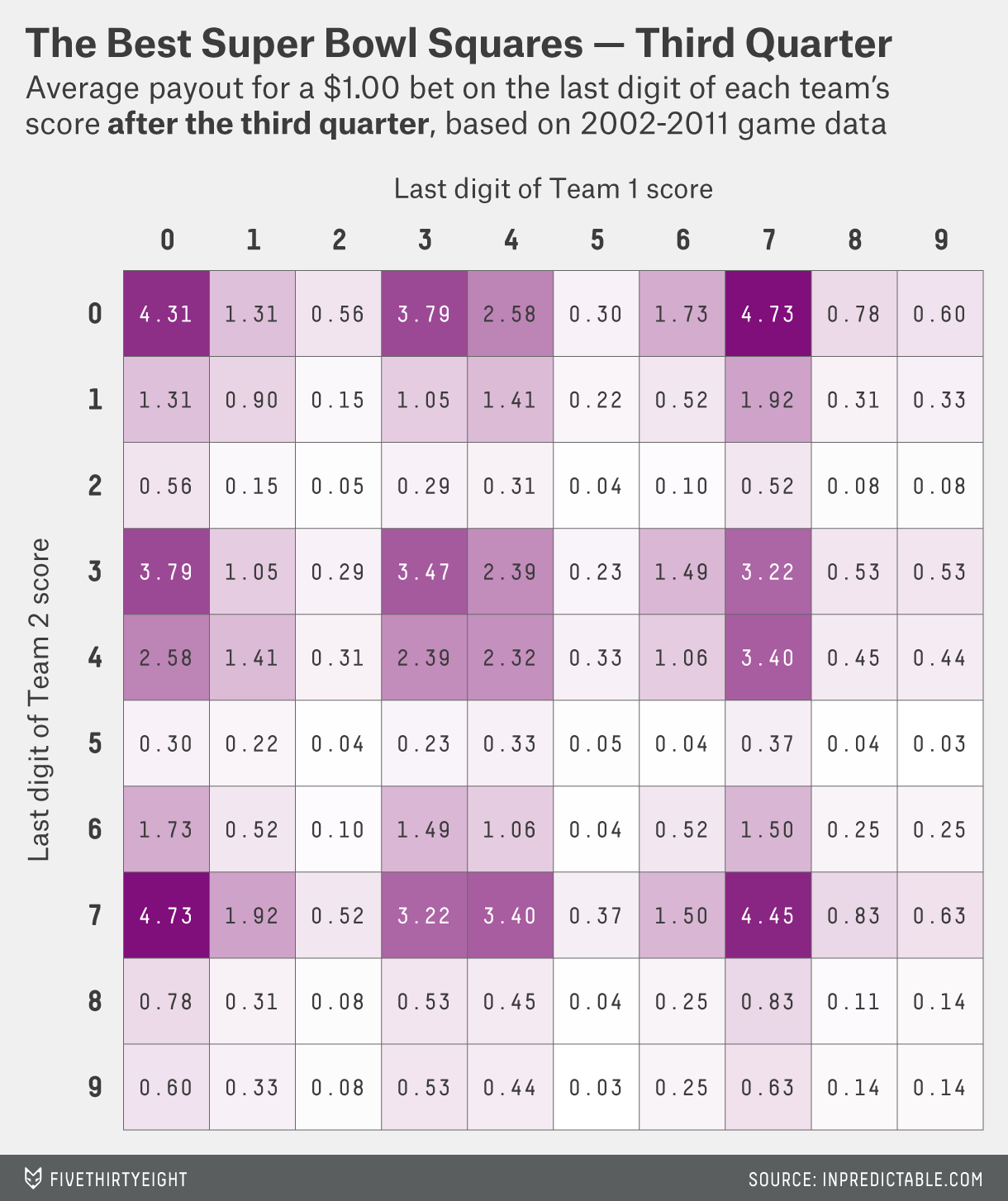 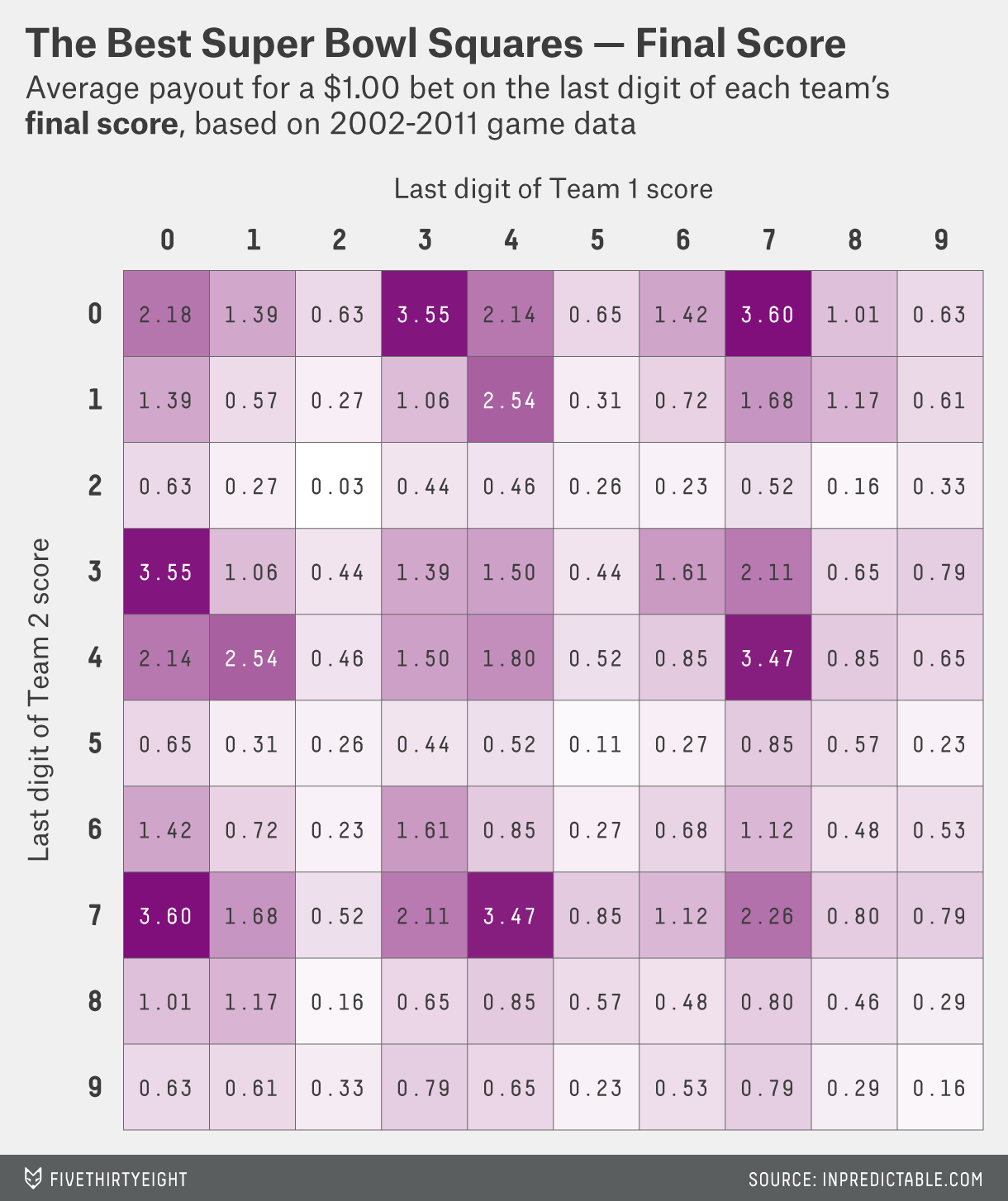 An alternate payout scheme that seems to have caught on recently is an “Every Score Pays” squares pool. Under this version, instead of waiting for the end of each quarter, a fixed percentage of the pool is paid out after every score change, including extra points. A typical amount is 5 percent of the pool per score. Payouts continue until the funds are exhausted. Any money left over at the end of the game goes to the holder of the final score square. Using detailed play-by-play data from that same 10 season dataset, I also calculated the expected value of each square under this somewhat more complex payout scheme (assuming the 5 percent payout option). 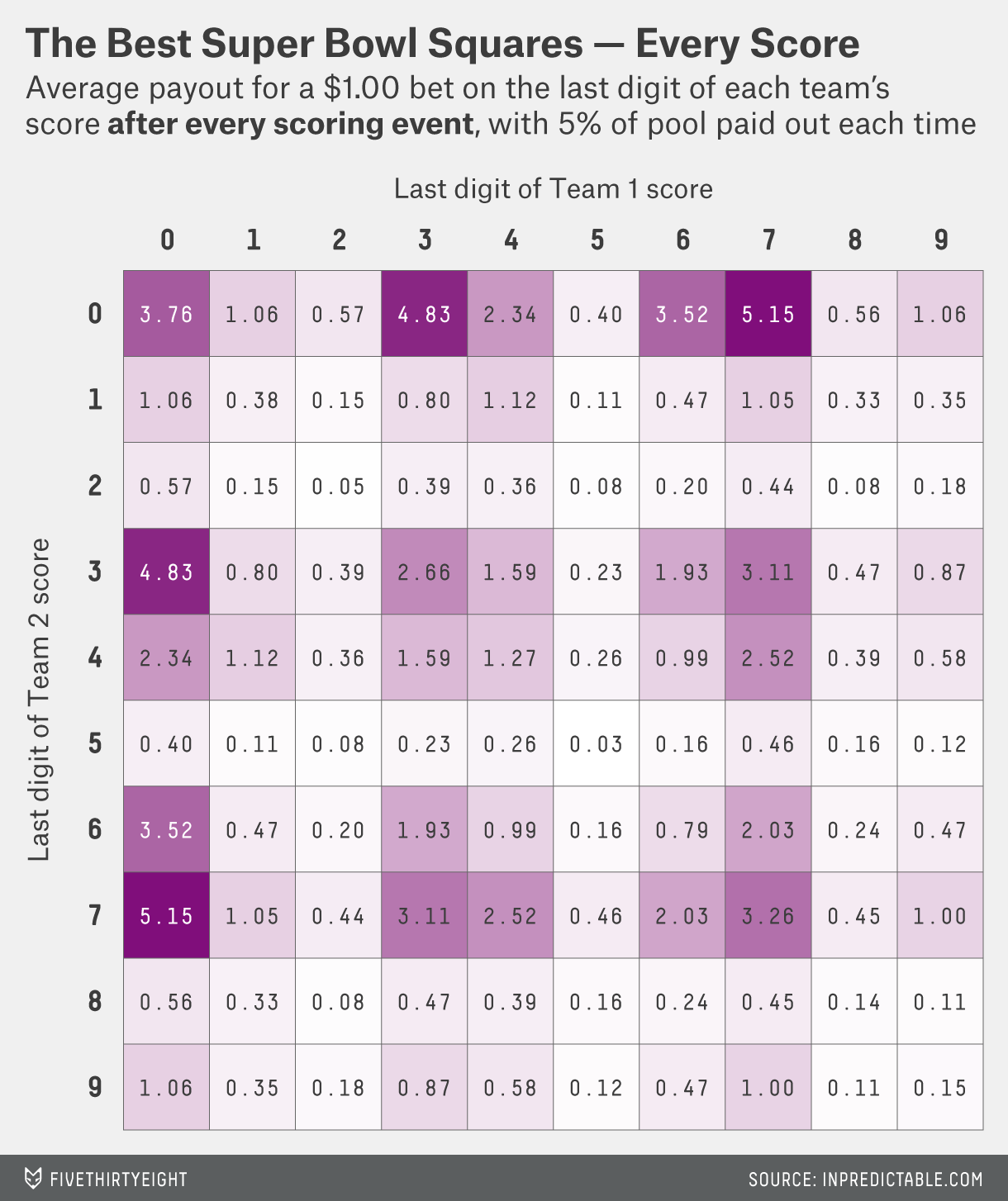 In general, regardless of the payout scheme, 0-7 and 0-3 will be valuable squares. 0-0 tends to be a valuable first quarter square due to the likelihood of a scoreless first 15 minutes. And, much like the “9” button on your microwave, the 5-5 square is highly unlikely to see much action this Sunday.