In 2010, United Nations member states agreed to try to hold the planet’s temperatures to 2 degrees Celsius (3.6 degrees Fahrenheit) above pre-industrial levels. It was a goal that acknowledged it was too late to stop the planet from warming, so instead we aimed to cap the potential damage from rising temperatures and sea levels.

More than 20 years since climate talks began, we’re already at least halfway to the 2-degree limit while emissions continue to rise. We know what staying below the 2-degree ceiling will take: leaving vast quantities of fossil fuel reserves untapped. To keep the planet cool, we’ll have to resist our urge to draw from it.

We’ve known that much for some time now. But a report published Wednesday in the journal Nature shows, in the finest detail yet, which fossil fuel reserves can be exploited and which should remain untouched if we’re to have at least a 50 percent chance of meeting the 2-degree limit.

The burden isn’t going to be shared equally: There will be winners and losers, and that means countries face tough choices. Do they maximize their energy resources — reaping the revenues and short-term stability that come with them — or exercise restraint for the greater good? Without the infrastructure to compensate countries that leave fossil fuels undeveloped, the economic benefits of energy development will often remain at odds with climate goals. As the U.S. debates what to do about the Keystone XL pipeline and countries get ready for climate talks in Paris this year, the new figures on “unburnable” fuels make clear that there’s no time to waste.

The new study calculates that staying within a 2-degree carbon budget will require countries to leave 80 percent of coal, 50 percent of gas and 33 percent of global oil untouched until at least 2050. Those numbers are in line with previous estimates by the Intergovernmental Panel on Climate Change and the International Energy Agency, but this report takes the calculations a step further by accounting for which reserves are best exploited, and which are better off left untapped.

Convincing regions that possess fossil fuels to leave much of them in the ground would be challenging enough in a global economy driven by growth and development. But the task is even more more daunting because of the economic importance and uneven distribution of these resources. Simply agreeing that every nation will scale back production by a uniform amount won’t work, because the climate and economic values of fossil fuels differ widely across various geographical regions. 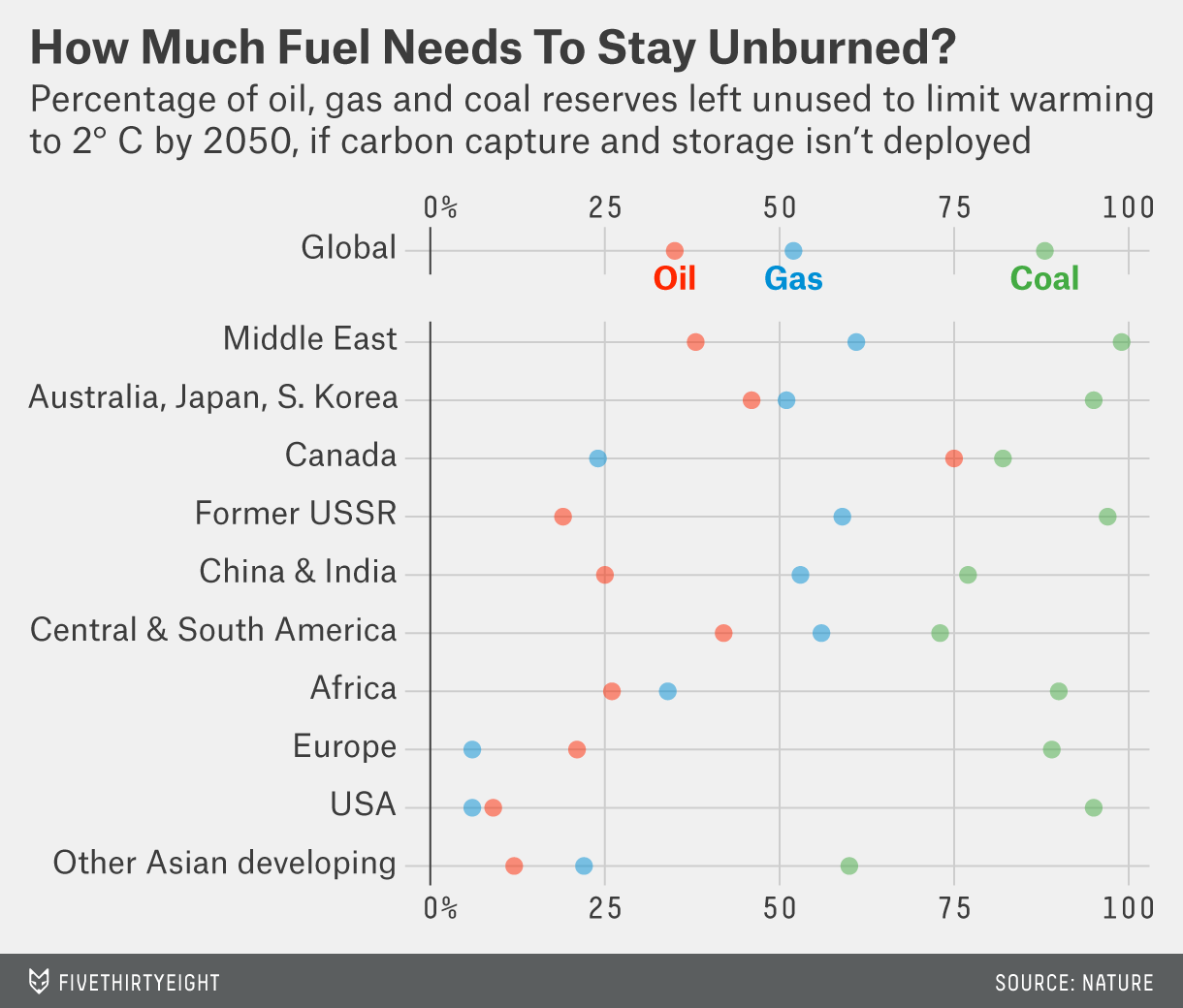 Yet the numbers show that leaving some fossil fuels untapped is absolutely essential to meet the carbon budgets necessary to stay within the 2-degree limit. James Leaton, research director at the Carbon Tracker Initiative, a London-based nonprofit think tank that focuses on how climate change will affect investment decisions, said that there’s a fairly strong consensus that we can burn around 1,000 gigatons of CO2 between 2011 and 2050 and still have a reasonable probability of staying below 2 degrees. In 2013 we burned 35.3 gigatons. You can make different assumptions and change the variables when calculating carbon budgets, he said, and they’ll yield different results. But the ballpark figures don’t turn out much different.

For their Nature paper, Christophe McGlade and Paul Ekins, researchers at University College London’s Institute for Sustainable Resources, made the calculations using a model that assessed the global energy system. The model is split into 16 different regions, which have certain energy demands — everything from heating homes to automobile transport to steel production. The model projects those anticipated energy needs into the future and then aims to find the cheapest way of satisfying them, McGlade said. “The model has to meet energy demands, but it also needs to meet the 2-degrees limit, and so it works out which of the reserves and resources in each region are optimal to use.”

Some people hope that carbon capture and storage, or CCS, can help. But scientists remain unsure of how much difference it can make. While CCS has potential, betting on it for large emissions cuts would be a dangerous gamble, said Michael Jakob, an economist at the Mercator Research Institute on Global Commons and Climate Change in Berlin, who wrote an editorial accompanying the new Nature paper. And given the scope of the problems, CCS can only make a small difference, according to Ekins and McGlade’s calculations.

The calculations show that some large reserves simply shouldn’t be tapped. For instance, essentially all Arctic oil reserves and 99 percent of Canadian oil sands are rated as unburnable under the model, a calculation that will surely give ammunition to those opposing the Keystone pipeline. More than half the world’s unburnable oil lies in the Middle East, but the model shows that the region could exploit more than 60 percent of its reserves without blowing the global carbon budget. The U.S. and Europe have the greatest flexibility to extract its reserves and remain within budget, in part because their proximity to energy users makes it more economical.

Energy systems are complex, and it’s important to note that there are uncertainties within the models. Yet “if you are firm about sticking to this 2-degree target then a lot of these uncertainties don’t matter quite so much,” McGlade said, because the cap on carbon is what’s important.

While staying within carbon budgets will necessarily require policy agreements, economic factors could also help drive some of the needed changes, Leaton said. For instance, coal has become less economical to extract in some places, including the U.S., and that’s taken some of this dirty fuel off the market. Some environmentally risky projects may also end up being too expensive to pursue, and future climate treaties could make emissions even more costly. The CTI has estimated that 92 percent of potential future Canadian oil sands production (20.9 billion barrels) will require oil prices of $95 per barrel or more to reach profitability. (Oil prices are now below $50.) Economics will remain a driving force in how much these oil resources get developed.

When negotiators arrive in Paris come December, they’ll need to debate how much fossils fuels can still be used and who’s allowed to use them. Of course, every country wants to develop its own energy resources, but the idea that each wants to maximize the economic recovery of its own resources is inconsistent with saying it also wants the global temperature to stay within the 2-degree limit.

“Those two attitudes are mutually exclusive,” McGlade said. “If you do want to develop new resources within your territory, someone else is going to have to suffer as a result.”

The way forward will require a climate agreement that’s global in scope and provides equitable compensation to those who stand to lose out.