Roads and trains were shut down across the New York area Monday night and into Tuesday, and for what? It snowed in New York, but only 9.8 inches fell in Central Park after predictions of a foot and a half or more. What went wrong? Forecasters, including yours truly, decided to go all-in on one weather model: the European model (or Euro).

And the Euro was way off. Other models had this storm pegged.1

Update after update, the Euro (produced by the European Center for Medium Range Weather Forecasting) kept predicting very high snow totals in New York. As of Monday morning’s run, the Euro was still projecting a foot and a half in the city. This consistency was too great for forecasters to ignore, especially because the Euro had been the first to jump on events such as the blizzard of 1996 and Hurricane Sandy. It also was one of the first to predict that a March 2001 storm was going to, like this one, be a bust. The Euro had a good track record.

That consistency, though, hid a great sense of uncertainty. The SREF (or Short-Range Ensemble Forecast), produced by the National Weather Service, collects 21 models (shown below). And Sunday night, the SREF indicated that the storm could be very different. Five of the 21 models in the SREF had (on a 10:1 snow-to-liquid ratio) less than 10 inches of snow falling. Nine of the 21 predicted a foot or less. Only eight could have been said to support 18 or more inches of snow in New York City. 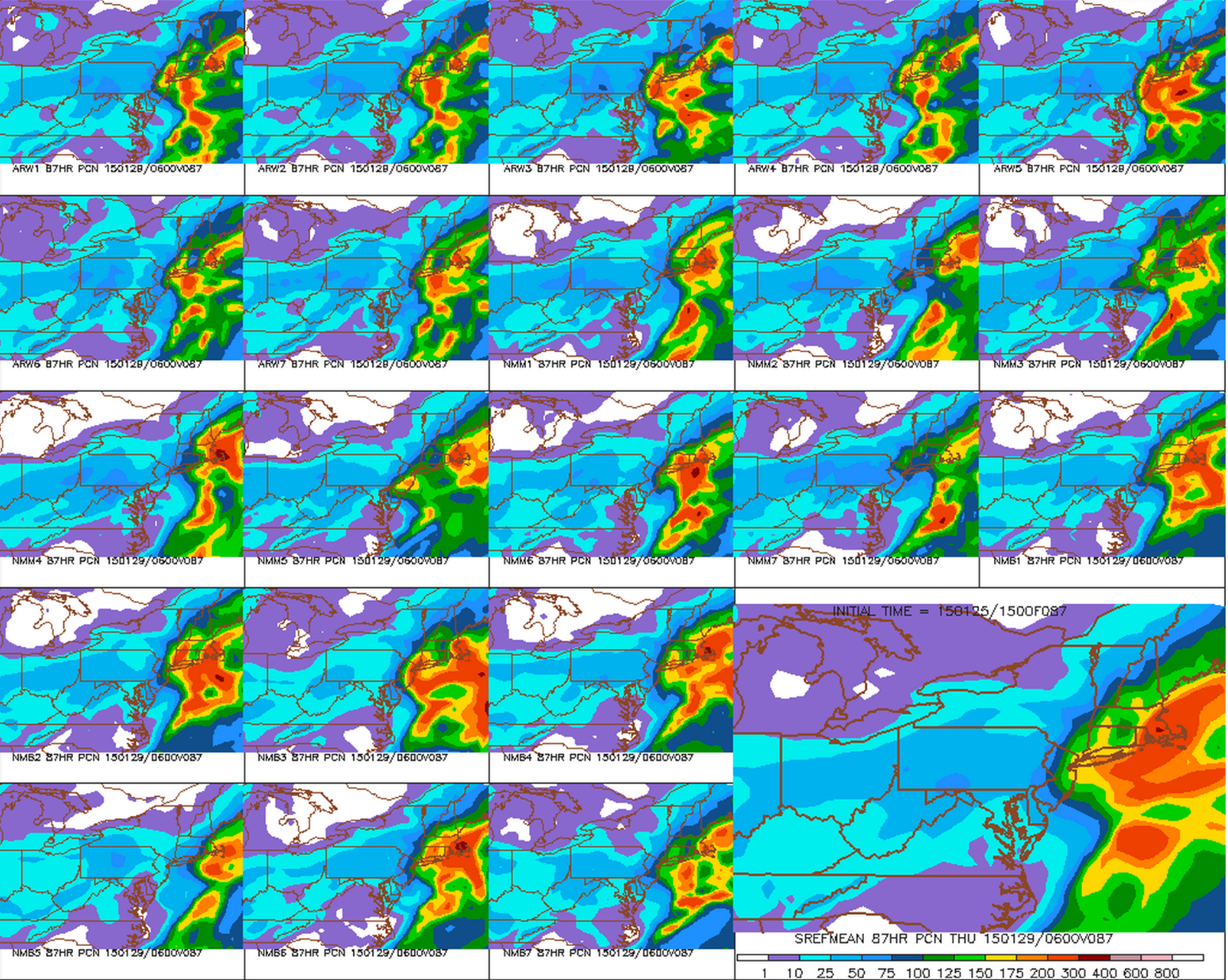 In other words, 57 percent of the SREF members Sunday night suggested the forecasts were far too gung-ho. By Monday afternoon, 11 of the 21 members were on the 10-inches-or-less train. Eight of the 21 still supported big-time snow, but they were a minority.

The SREF members were not alone in being suspicious of so much snow. In Sunday’s 7 p.m. run, all of the other major models were against the Euro.

Put it all together, and there was plenty of evidence this storm wouldn’t be record-setting in New York. Of course, forecasters are going to miss on occasion. Forecasting weather is very difficult. Models aren’t perfect, and forecasters should be practicing meteorology and not “modelology.”

That said, there are a few lessons to be learned:

Meteorology deals in probabilities and uncertainty. Models, and the forecasters who use those models, aren’t going to be perfect. In this case, there was a big storm. It just so happened to be confined to eastern Long Island and southern New England. But that’ll do little to satisfy New Yorkers who expected a historic blizzard.