In what percentage of relationships does the woman make more money than the man? And does this increase the probability of a divorce?

In 38 percent of heterosexual American marriages, the woman outearns her husband. Although that’s a long way off from an even 50 percent, it’s a significant improvement on what the numbers looked like in 1987, when less than a quarter of women were the primary breadwinners in their families.

But these numbers, which come from the Bureau of Labor Statistics, are sort of confusing — a lot of those women are earning more because they’re the only member of the marriage who is earning anything at all. When the BLS looked instead at marriages where both partners are in paid work, it found that only 29 percent of women earn more than their husbands. 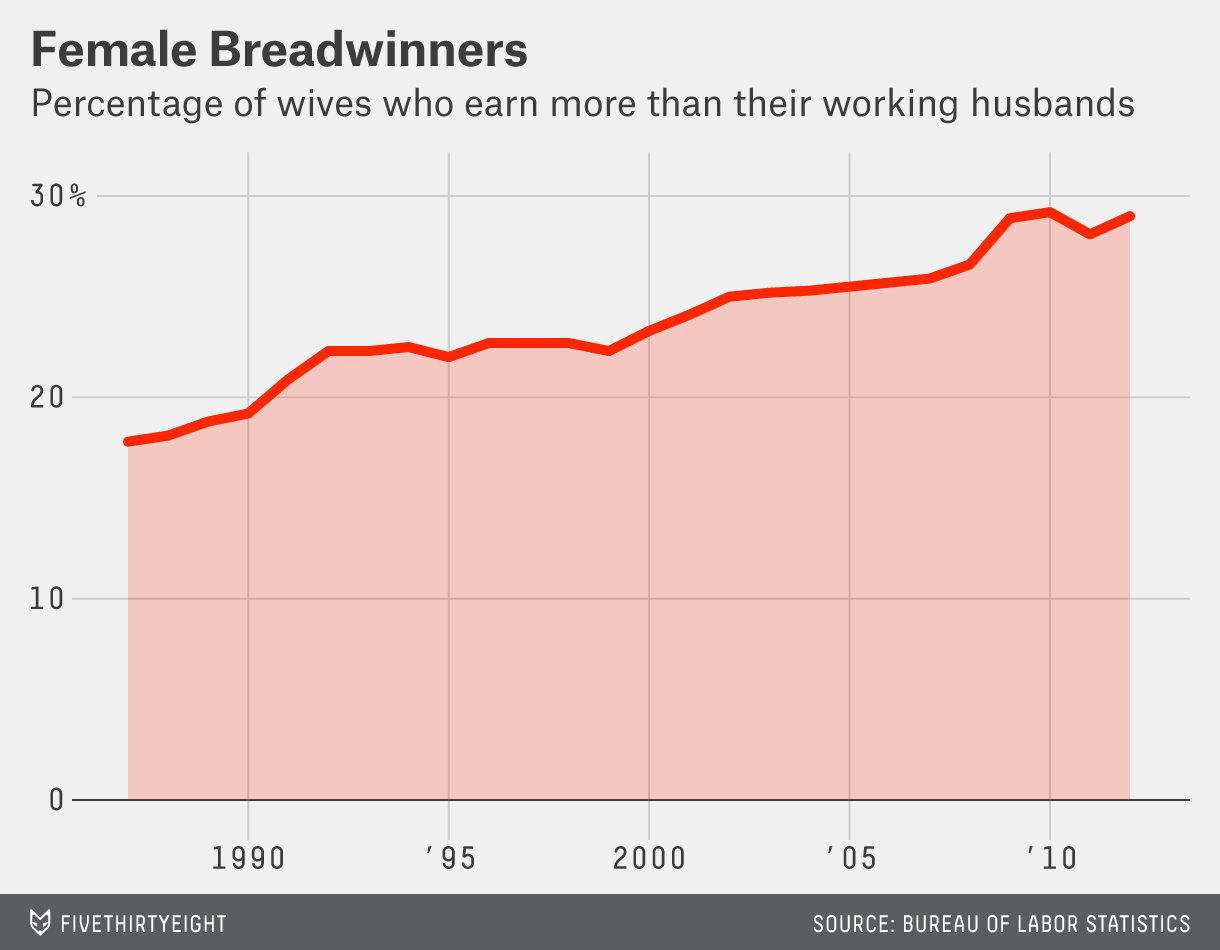 As with most statistics though, this data neglects America’s cohabiting couples (6.5 million of them opposite-sex and an estimated 0.7 million of them same-sex) and couples who aren’t living together. Instead, the BLS focuses only on married-couple families, of which there were 36 million in 2012, the latest year of available data. But maybe that’s exactly the sort of American household you’re interested in, seeing as you also raised the question of divorce. There, too, I have some statistics.

In 2013, the University of Chicago Booth School of Business published a paper that looked at 4,000 U.S. married couples who responded to the National Survey of Families and Households. It found that when the wife was the higher earner, the chances that the couple would report being in a “happy” marriage fell by 6 percentage points. Couples in which the wife earned more were also 6 percentage points more likely to have discussed separating in the past year.

Trying to understand the causal link between female breadwinners and divorce, the authors looked at housework and child care. On average, women do more than men (that’s well known), but the researchers found that the housework gap got even larger when the woman was the primary earner. They think this finding, which is based on eight years’ worth data from the American Time Use Survey, “suggests that a ‘threatening’ wife takes on a greater share of housework so as to assuage the husband’s unease with the situation.” Ultimately though, that “second shift” becomes too tiring for the woman and places additional strain on the marriage.

There are other ways in which an income gap can lead to marital stress. Christin Munsch, then a doctoral candidate at Cornell University, analyzed data on 18- to 28-year-old couples (some were married and some were cohabiting) from the U.S. National Longitudinal Survey of Youth. She found that the more that a man is financially dependent on his female partner, the more likely he is to cheat on her. Men who are entirely dependent on their girlfriends or wives are five times more likely to cheat than men who earn the same amount as their partners. In contrast though, the more financially dependent a woman is on her male partner, the less likely she is to cheat. The trend was clear, despite that the overall numbers were low — 3.8 percent of men and 1.4 percent of women admitted to cheating on their partners in a given year between 2002 and 2007.

Women reading this may wonder whether the only men suitable for marriage are those who earn a lot more. But the research from Cornell found that men who made significantly more than their female partners were also more likely to cheat. The author noted the irony:

At one end of the spectrum, making less money than a female partner may threaten men’s gender identity by calling into question the traditional notion of men as breadwinners. At the other end of the spectrum, men who make a lot more money than their partners may be in jobs that offer more opportunities for cheating like long work hours, travel, and higher incomes that make cheating easier to conceal.

So, Joseph, if you are among the 38 percent of married couples in which the wife earns more and you’re stressed about the situation, I have to say (with the utmost respect) get over it. Your marriage depends on you not having a fragile ego.