I’m writing this in a windowless room and have a headache that can only be described as tumultuous. I’ve tried to remedy the situation with a bacon, egg and cheese sandwich. I am eating extra-strength ibuprofen caplets like they’re M&M’s. The previous night was the FiveThirtyEight holiday party, the antecedent to the unauthorized FiveThirtyEight after-party at One Star. So, it’s the perfect moment to tackle our next bar fight:

How many Americans are hungover at work on any given day?

I’ve thought about this relatively often, because my career path — from the restaurant business to journalism — has been dominated by occupations where some people roll into work with shades and water bottles.

There’s a bit of data on this. One survey found that half of respondents reported they have been hungover at work. But this was conducted by a company that sells a hangover cure, so I’m skeptical. And when I say I’m skeptical, I mean that I consider this number to be entirely untrustworthy, as it was probably derived to get headlines and sell a brand of aspirin and caffeine tablets. 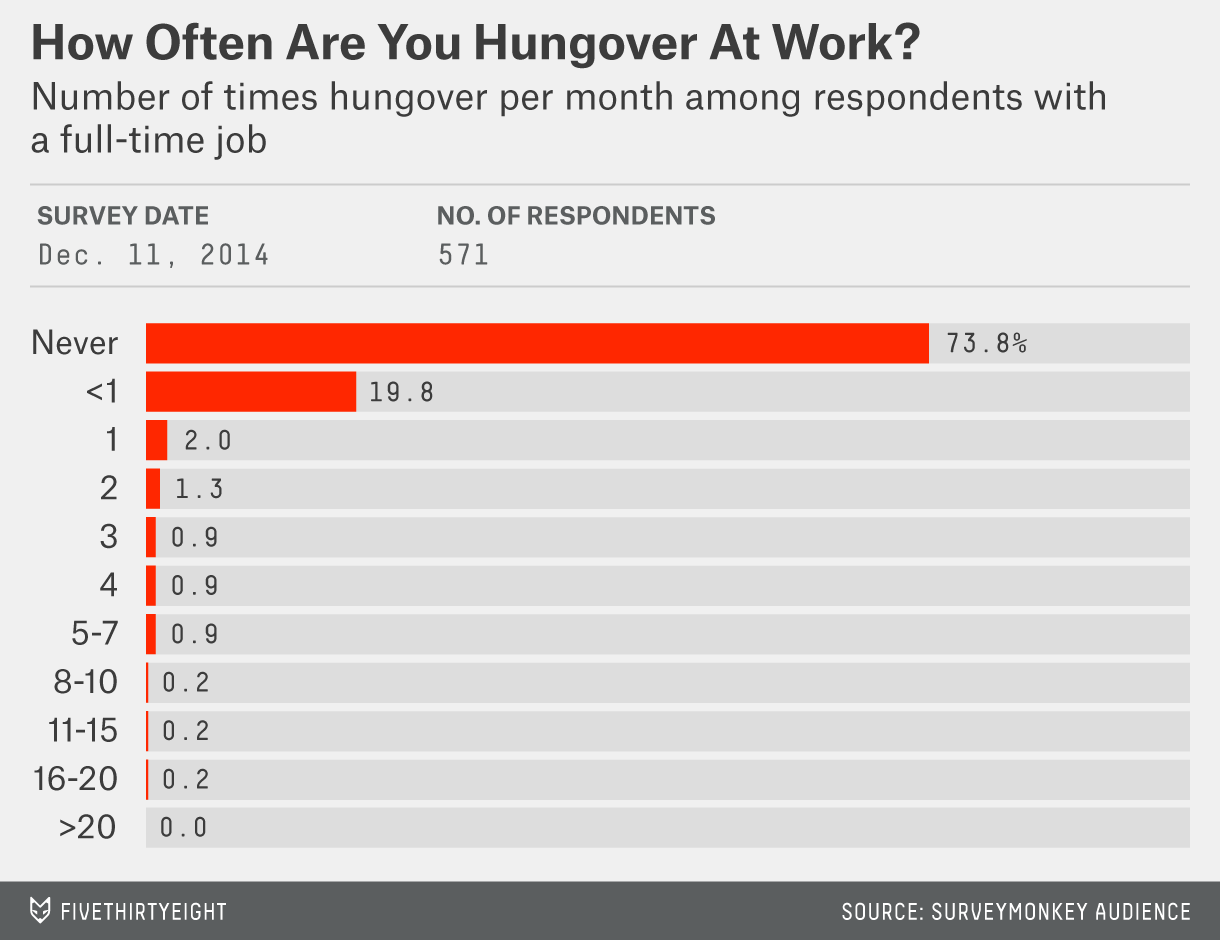 For the most part, Americans are arriving at work unencumbered.

We’ve got to be careful about drawing conclusions from the remaining group of people — the 6 percent I refer to as “champs” — because the sample size is very small. We’ll only use those people to get a ballpark estimate, and take that estimate with a grain of salt.

That big caveat aside, that group’s breakdown makes sense: 2 percent of respondents said they go to work hungover once per month, 1.3 percent twice, 0.9 percent three and four times, and so on with decreasing frequency.

The average American worker did 1,758 hours of work in 2011. If we break that down into eight-hour shifts, that’s about 220 work days per year, or about 18.3 per month. So, we can estimate a person who said he was hungover once per month is hungover on 5.5 percent of the days worked.

If we do this for each frequency group, we can estimate the probability a person from each group is hungover on a given day. We can multiply those probabilities by our estimates for the number of people in each group. When we add them up, the estimated number of hungover workers on a given day is 1,946,677 people — roughly 2 million. That’s 1.6 percent of the full-time workforce. (I’d imagine that number is lower at the beginning of the week and higher at the end.)

So, this holiday season, if you find yourself punching in desiccated and bleary-eyed after a night of wassailing, take pride that you’re in the 1.6 percent.