What percentage of marriages in the U.S. are between first cousins?

An estimated 0.2 percent of marriages in the United States are between individuals who are second cousins or closer — that means there are about 250,000 people in America in those relationships. I know you asked about first cousins, but all the research I’ve found uses second cousins as the benchmark of consanguinity (more commonly known as intermarriage). A brief reminder here, Daryn, if, like me, you get confused about who is a second cousin: It’s someone who shares a great-grandparent with you.

The first-cousin marriages you’re asking about are just one type of consanguineous relationship (that’s pronounced kon-sang-gwin-ee-uh s in case you were struggling, as I was). To assess consanguinity, researchers give relationships an inbreeding coefficient — the higher the number, the closer the two individuals are related. First cousins have an inbreeding coefficient of 0.0625. Anything at or above 0.0156, the coefficient for second cousins, is considered consanguineous; that includes relationships between people and their nephews and nieces.

But the estimate that 0.2 percent of U.S. marriages are between people who are second cousins or closer needs to be treated with plenty of caution. For one thing, 25 states ban marriage between first cousins, and another seven states have restrictions on it (for example, in Arizona first-cousin marriage is allowed only if both people are 65 or older, or if one is unable to reproduce). Those laws might make some individuals reluctant to say they are in a consanguineous relationship and result in some undercounting of relationships.

What’s more, the 0.2 percent estimate is based on studies that were conducted in the United States between 1941 and 1981. To find out whether the share has changed since then, I emailed Alan Bittles, a professor at the Centre for Human Genetics at Edith Cowan University, which, like you, is in Western Australia. Bittles has spent almost 40 years researching consanguinity and has published more than 100 papers on the topic.

Bittles thinks that relationships between relatives may be on the rise in America because of immigration. Immigration is relevant because consanguinity is much more common in some other countries. In fact, Bittles himself first became interested in the topic during a research trip to the Indian Institute of Science in Bangalore in 1977. Before then, he was “unaware that such marriages occurred in major populations,” he told me. (You, on the other hand, Daryn, told me that you became interested in this question while “browsing around the ancestry of Queen Elizabeth II.” To each his own.)

Since then, Bittles has attempted to piece together a map on the global prevalence of consanguinity. His 2001 findings are summarized in the map below (you can also view and download the numbers here). They include Australia, where it’s estimated that 0.5 percent of all marriages are consanguineous. 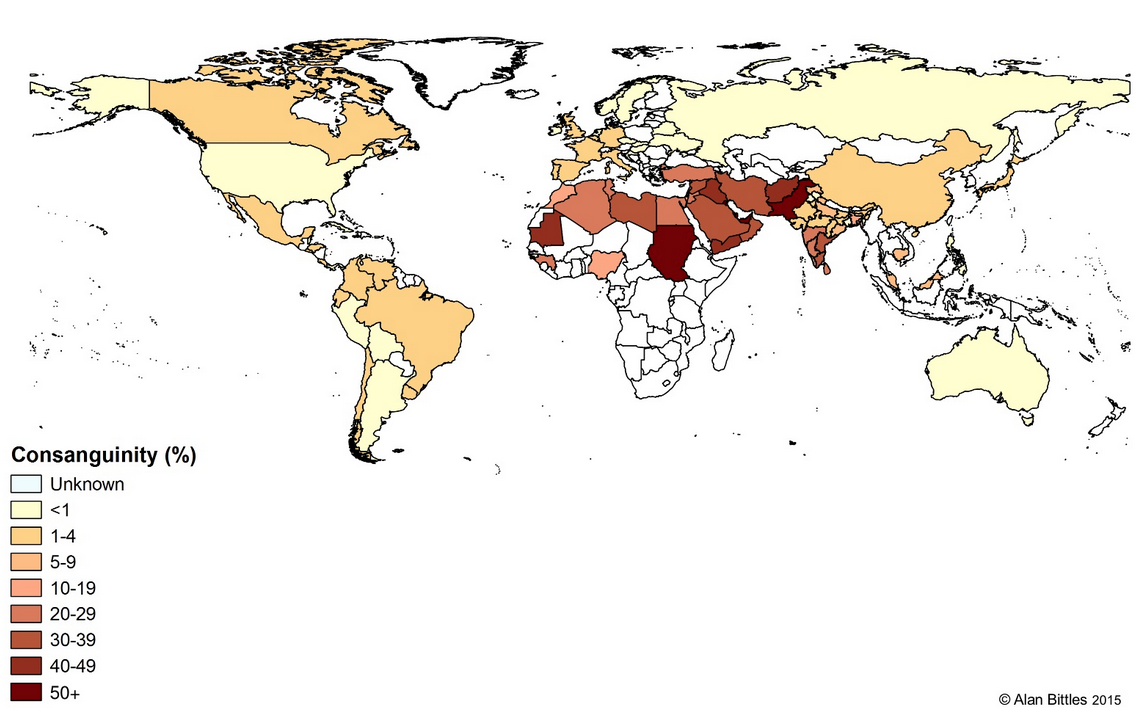 There are many reasons why marriages between relatives are favored in some parts of the world. Sociological studies have found that a relationship with a relative can be more stable because couples can maintain the same social relationships before and after marriage. Other reasons include health and financial security (the idea being that you’re more likely to keep secrets hidden from a stranger than a relative) and, for women, the chance to stay closer to their parents and have a better relationship with in-laws. High global prevalence is in itself a reason to study consanguinity — about 10.4 percent of the world’s population is married to a second cousin or closer, or is the product of such a union: That’s about 750 million people.

Marriage between cousins wasn’t always prohibited in America. From the 1860s, states began legislating on various aspects of marriage, including mental-capacity restrictions, statutory ages and anti-miscegenation laws. Bans on cousin marriage were introduced at the same time as part of a post-Civil War acceptance of the need for oversight, even in personal matters. Today, the practice is highly stigmatized, partly because of health concerns about children born to first cousins.

The prevalence of some recessive genetic diseases is higher in the offspring of couples who are related. In children born to first cousins, mortality rates are estimated to be about 3.5 percent higher. However, Bittles notes that most research has not controlled for factors such as maternal age and education, birth spacing and socioeconomic status — those may correlate with consanguinity and may also affect health outcomes.

And the consensus about health risks appears to be shifting. In 2002, the National Society of Genetic Counselors (NSGC) published the findings of a task force set up to look specifically at the risks for offspring of first cousins. They estimated that health risks for those children were about 1.7 percent to 2.8 percent higher than for children born to unrelated parents. They concluded that “There is a great deal of stigma associated with cousin unions in the United States and Canada that has little biological basis.”

Maybe, though, Daryn, you’re uncomfortable with the notion of a romantic relationship with a first cousin, or anyone with whom you have a high inbreeding coefficient. If so, this app developed in Iceland (a country with a small population where naming conventions make it hard to figure out who’s related by blood) may be of interest to you. The “incest spoiler” uses a genealogical database so users can check if they’re related before hooking up.