Back in 2017, the Boston Celtics secured the No. 1 overall selection in the NBA draft thanks to a pick swap acquired in the famed Paul Pierce/Kevin Garnett blockbuster trade. Just about everyone thought that University of Washington guard Markelle Fultz was the top available prospect, but Celtics general manager Danny Ainge saw things differently. Rather than standing pat and selecting the player nearly everyone viewed as the best prospect, Ainge traded down and almost immediately declared that he expected to get the same player at No. 3 that he would have taken at No. 1.

The twists and turns taken by Fultz’s career were hardly foreseeable, but three years in, Ainge is looking pretty prescient for having identified Jayson Tatum as his guy. Fresh off the first All-Star appearance of his career, Tatum is in the process of taking the leap to stardom.

He’s working on career-best averages in points, rebounds, assists, steals, blocks, free throws and threes per game and per 36 minutes, as well as high marks in more advanced measurements like player efficiency rating and rates for usage, rebounds, assists, steals and blocks. In his last 14 games prior to the break (and specifically in the first half finale against the Clippers), Tatum seemed to reach even greater heights: He averaged 26.6 points, 7.0 rebounds, 3.1 assists, 1.5 steals and one block per game during that stretch, scorching the nets to the tune of 50 percent from the field, 44.5 percent from three and a 61.8 true shooting percentage.

Last year, Tatum was often criticized for indulging in too many of the game’s worst shots: long twos. He came into this season vowing to get better looks, and he has indeed shifted his shot distribution in a far more desirable direction. Only 8.8 percent of his shot profile is comprised of attempts between 16 and 23 feet from the basket, down from 16.9 percent a year ago. Overall, he is taking a far greater share of his shots from three and inside the paint, and far fewer from the midrange area.

Those tweaks have allowed Tatum to take a step forward in shooting efficiency despite increasing his usage rate by 6 percentage points, not finishing quite as well near the rim and only shooting a tick better from beyond the arc than he did a year ago. Perhaps even more impressively, Tatum has made these strides while creating more of his own looks than ever before. During his rookie year, 56.5 percent of his 2-point baskets were assisted, according to Basketball-Reference.com. That figure is now down to 46.2 percent. The same trend is apparent with his triples, which were assisted 92.4 percent of the time during his rookie season but have been so only 60.3 percent of the time this year.

Tatum was a clear-cut complementary player1 as a rookie and more of a secondary option behind Kyrie Irving last year,2 but his shot-creating ability was one of his selling points as a college player, and tapping into that skill set this year has allowed him to take on co-lead scorer duties with Kemba Walker.

The Celtics’ confidence in Tatum’s ability to create with the ball in his hands is apparent in the distribution of his touches, which now allow him to work on the ball far more often. According to Second Spectrum, 63 percent of action involving Tatum during his rookie season was off the ball (i.e., off-ball screens and dribble hand-offs) compared with 37 percent on the ball (i.e., pick and rolls, isolations and post-ups). This season, those numbers have nearly flipped: On-ball action now accounts for 58 percent of Tatum’s total. 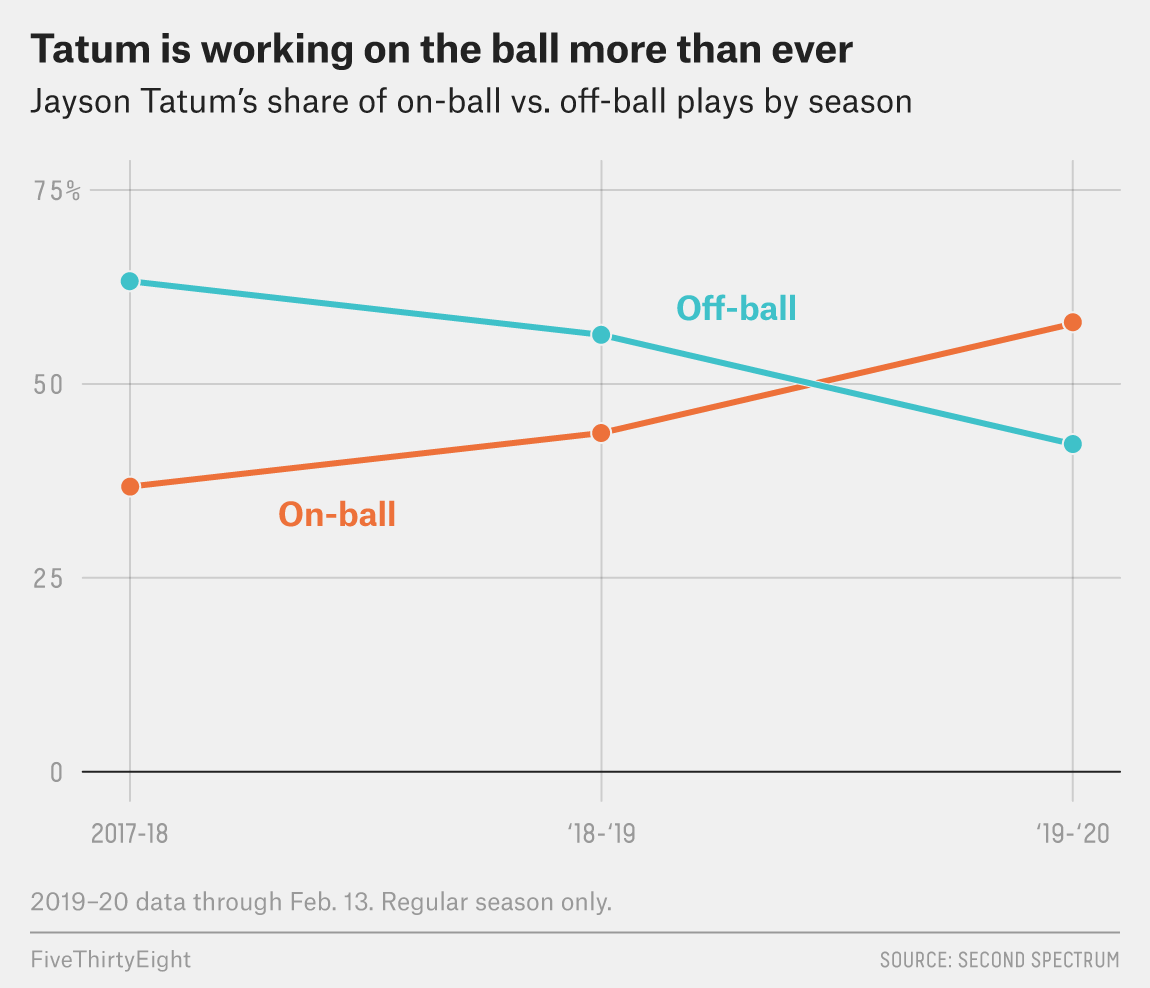 Tatum has also rewarded the Celtics for their faith in his ability to self-create. He has been a more efficient scorer in all of the aforementioned actions this season, but the strides he’s taken in isolation and the pick and roll have been particularly impressive.

Tatum has always had a strong package of scoring moves, but this season — and especially in recent weeks — he has used the whole set of tools together with more regularity. His handle has gotten tighter, and he’s turning the ball over less often. He’s added some shake to his game, which has allowed him to create more separation with his defender and get to his spots on the drive more consistently. He’s been more decisive in isolation situations, putting together quick combinations of moves that leave his defender in the dust and don’t allow time for a helper to get over and disrupt his path.

In pick and rolls, he has shown a particular affinity for “putting the defender in jail.” Tatum will often take the screen moving in one direction, then slow down while he snakes back behind the screener, stick his butt into the defender’s stomach, use a subtle forearm shiver to create some space and finally hit the jets toward the rim — all of which allows him to finish more cleanly than if he had just attacked the defender right away. Tatum’s change of pace can result in the helper backing off and occasionally backpedaling his way right into an additional screen, which prevents him from challenging Tatum’s shot.

As impressive as he’s been offensively, Tatum has probably been even better on defense this season. He currently ranks third in the entire NBA in ESPN.com’s Defensive Real Plus-Minus and is a legitimate candidate for a spot on the All-Defensive first team.

His activity level is higher than ever, which has led to his posting career highs so far in blocks, steals and deflections per game and per 36 minutes. And playing almost exclusively as a power forward or center has freed Tatum to roam a bit more often, which has helped the Celtics stave off the defensive drop-off many (myself included) predicted when they lost Al Horford to the 76ers and traded Aron Baynes to the Suns last offseason.

Boston has done well to weaponize Tatum’s versatility, freely switching him onto opponents at any position, at any time. According to an analysis of Second Spectrum matchup data by Krishna Narsu of Nylon Calculus, Tatum is one of only three players in the league3 who has spent at least 19 percent of his defensive possessions guarding each of point guards, shooting guards, small forwards and power forwards. He has done so well against primary ball-handlers that the Celtics have even had him defending players like Chris Paul and Trae Young in the fourth quarter of recent games.

Tatum has done a better job of defending with his feet and his chest rather than his arms and his hands, which has helped him slash his blowby rate to the lowest point of his three-year career, per Second Spectrum. In this montage, his prowess is on display: He can quickly transition from defending a ball-handler to switching onto a screener to helping on the drive to closing out on a shooter, and make it all look fairly routine — even while working against some of the NBA’s best players.

As if his improvements as an individual offensive hub and an all-around defender weren’t enough, Tatum has also made gains as both a rebounder and a passer.

According to Second Spectrum, he’s corralling rebounds 2.33 percent more often than expected, which ranks 38th out of the 160 players who have been on the floor for at least 2,000 rebound chances this season through the All-Star break. That rate is also nearly double the one he posted during his rookie campaign. Tatum has also notched career highs in his 5.1 potential assists per game, as well as the 7.6 points per game he’s created with those assists. Tatum’s dishes have yielded a career-best 52.6 percent expected effective field-goal percentage this season, and he is creating more high-value opportunities than ever before.4

Tatum’s strides as a defender, rebounder and playmaker have allowed him to contribute at a high level even in the odd game when his shot isn’t falling. This type of all-around growth is what takes a player from promising young talent to All-Star. Continuing that growth and also building consistency on a night-to-night basis takes that same player from All-Star to superstar. Tatum has conquered the first part of that process, and he may be on his way to achieving the second.