In his 2020 presidential announcement video, two-term Washington Governor Jay Inslee declares that climate change is the “most urgent challenge of our time.”

Inslee intends to make climate change his signature issue. “I have heard from around the country that people believe that this issue demands priority, and it demands a candidate from the Democratic Party that will make it front and center,” he told FiveThirtyEight before his campaign announcement. He’s convinced that when voters see his work on climate change along with a laundry list of progressive achievements, it’ll be enough to become the nominee.

But to do that, he first has to beat the Democratic field. As a whole, Inslee has a solidly liberal record, one that could conceivably attract voters on the left of the party. But that could be a crowded part of the field, with well-known names such as Elizabeth Warren and Bernie Sanders already running. Sanders, for example, has increasingly sought to make climate change one of his core issues, which could steal some of Inslee’s thunder. Still, Inslee probably will be one of the few Democratic governors running, and his ability to point to tangible accomplishments rather than just rhetoric could allow him to differentiate himself from many other Democratic contenders.

As governor of Washington, Inslee has built a record of economic growth for which he credits his progressive policies. Among those policies are a minimum wage that is more than 50 percent higher than the federal one, a family leave policy1 that allows some workers to take up to three months of paid leave for a medical condition or to care for a new child or ailing family member, and a law that requires workers to receive equal pay and career advancement opportunities regardless of gender. Inslee has overseen an expansion of college financial aid for undocumented students and a large-scale transportation infrastructure program. He’s confident his record would help him beat President Trump. 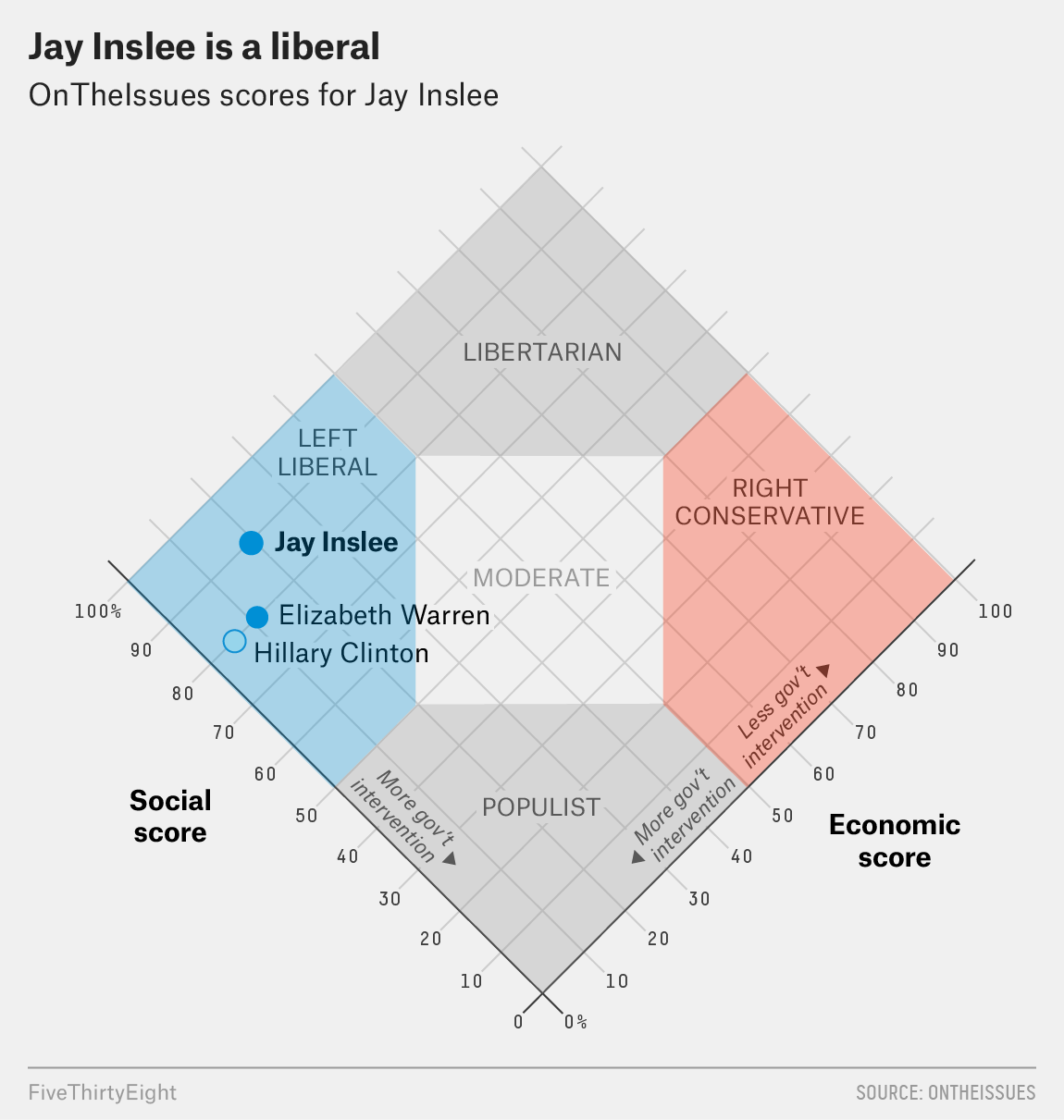 But Inslee’s candidacy also relies on an unproven gambit: that climate change can be a winning issue in the 2020 Democratic primary.

At first glance, climate change may not have sufficient salience to carry a presidential campaign. It received little attention during the 2016 presidential race. In three presidential debates and one vice presidential face-off, the topic was never raised specifically.

But Inslee said the time is right to make climate change a central issue because it’s no longer a hypothetical but something that “touches everyone in every part of the country” and “every aspect of life.”

Just before the 2018 midterm elections, Gallup released findings that placed climate change as the fifth-most-important issue to Democratic voters, behind topics like health care and wealth inequality. Still, 75 percent of Democrats said it was an extremely or very important topic, compared with just 27 percent of Republicans. We can see how much the parties have diverged on the issue using a Gallup question that looks at concern about climate change. In 1990, the share of Americans who worried a great deal or a fair amount about global warming did not really differ by party identification. Today, Democrats and Republicans are a world apart. 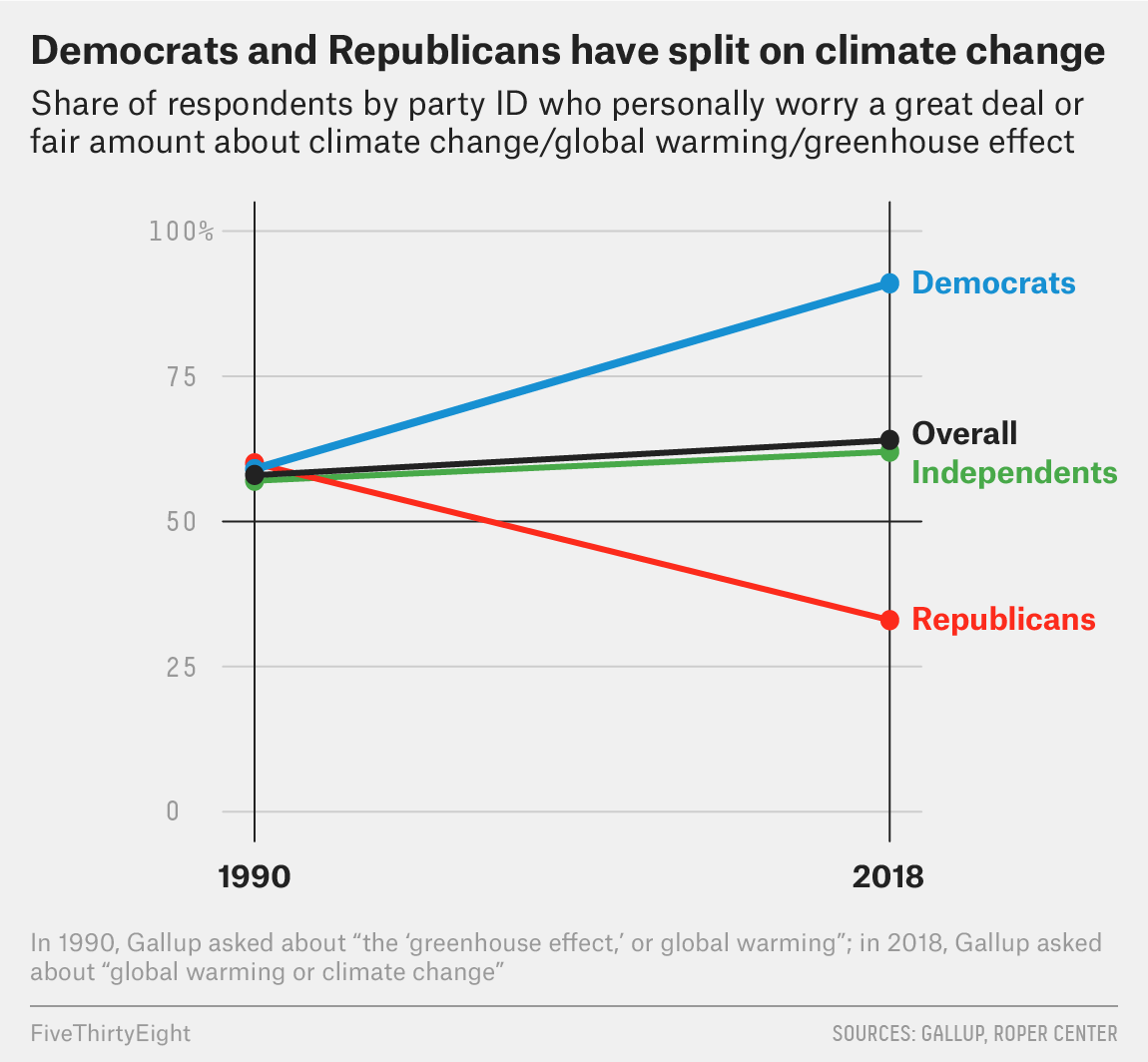 Given the level of concern among Democrats, perhaps a campaign that homes in on climate change can help Inslee make inroads on the left during the primaries. It’s a topic receiving a lot of attention at the moment because of the proposed “Green New Deal” being pushed by some progressive Democratic House members. Moreover, Democrats can easily use the issue to attack the president’s record. The Trump administration has hindered efforts to address global warming by withdrawing the U.S. from the Paris climate agreement and working to roll back auto fuel efficiency standards.

But putting climate change ahead of all other issues could be risky, Stanford University psychologist Jon Krosnick said. He has helped lead national surveys of public opinions on climate change since 1995 that have found that most voters don’t make their ballot box decisions based on climate change alone. Krosnick’s surveys show that about 18 percent of voters are passionate about climate change, which means that “taking a stand on this issue is electorally very wise, but making this a signature issue is probably unwise.”

Inslee plans to try anyway. He’s framing climate change as a threat to national security that warrants a huge government response on a scale akin to the Manhattan Project or NASA’s program to put humans on the moon. “This is the eleventh hour, but it should be our hour to shine and for we, as Americans, to do what we do best, which is to create, innovate and build,” Inslee said. His goal is to make the economy less reliant on fossil fuels over the next several decades, a task he called “a massive undertaking requiring a huge concentration of our intellectual talents, our entrepreneurial zeal, and to some degree, our investment.”

To achieve this goal, he advocates for clean fuel standards to reduce emissions from vehicles. He wants to revamp the U.S. electrical grid with a 100 percent clean power plan like the one he’s pushing for in his state of Washington, make buildings “net zero” emissions with stringent building codes, and promote alternative energy with subsidies.

It will be interesting to see whether he proposes a carbon tax to help him accomplish some of those goals. It’s an approach that has broad support from economists across the political spectrum, yet Inslee has been unable to get one passed by voters or the legislature in his own state. He doesn’t think that makes it kryptonite. “A carbon tax is just one of the tools in the toolbox,” he said, adding that it may not be the most important one. The carbon tax that failed in Washington didn’t derive most of its carbon savings from the signal to consumers sent by higher carbon prices, Inslee said, but, rather, from “putting people to work on building and installing solar arrays and building homes and businesses that are net zero. That’s where you’ve actually got the carbon savings.”

Is the failure of that carbon-tax measure in his own state an omen or just a bump in the road for Inslee? Whichever it is, it hasn’t nudged him off his strategy. “I believe that contrast is good in elections,” Inslee said, and the contrast between Democrats and Republicans on climate issues is stark. “We should embrace that contrast, magnify it, and run with it.”