When legendary Brooklyn-born rapper Notorious B.I.G. implored listeners of his debut album to “Spread love, it’s the Brooklyn way,” it’s likely that he had bigger things in mind than a Brooklyn Nets point guard spreading the basketball around to his teammates.1 But James Harden is doing just that — and plenty more — for his new team. And the things he’s doing have the Nets looking like an inner-circle contender, sitting just a half-game out of the lead in the Eastern Conference as Harden prepares to make his return to Houston on Wednesday night.

In 22 games as a Net, Harden is averaging 11.3 assists per game, raising his seasonlong average to a league-best 11 a night.2 Harden’s assist rate (the share of teammate baskets he assisted while on the floor) — which plummeted from a career-high 50.7 percent during the 2016-17 season all the way to just 35.9 percent a year ago — has shot back up to 43 percent with the Nets. His usage rate, which crested at 40.5 percent during the 2018-19 season, is all the way down to just 26.9 percent in Brooklyn — the lowest it’s been since he was still a member of the Oklahoma City Thunder in 2011-12.

Of course, the changes Harden has made to his game since arriving in Brooklyn go beyond just “he’s passing the ball more often.” He’s playing differently than he had the past few years, too. Specifically, he’s seen a sharp reversion in how often he isolates as opposed to running a pick-and-roll.

When Mike D’Antoni showed up in Houston for the 2016-17 season, Harden’s pick-and-roll usage nearly doubled. He went from running 33.2 pick and rolls per 100 possessions in 2015-16, according to Second Spectrum, to 65.9 per 100 in D’Antoni’s first season. But that was his high-water mark under D’Antoni, as the Rockets shifted toward a more isolation-heavy offense over the years. Last season, the gap between Harden’s pick-and-roll and isolation usage per 100 possessions was the smallest it had ever been during the player-tracking era, which began in 2013-14. Since arriving in Brooklyn, though, his usage of those plays has diverged again. Harden is back to pick-and-rolling far more often than he isolates.3 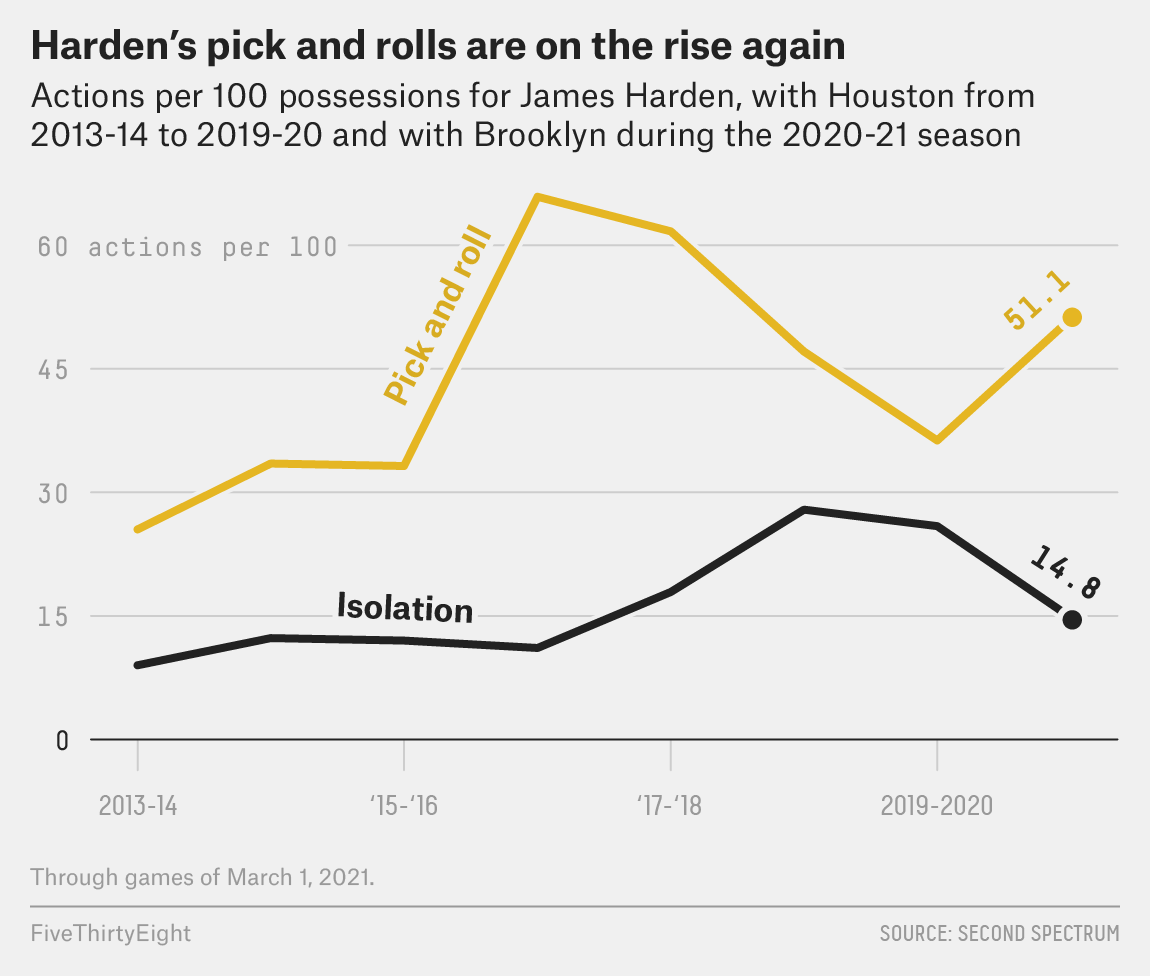 Naturally, Harden is also passing out of those actions more often than he did for much of the D’Antoni era in Houston, and he’s shooting less often. (Interestingly, these trends began reversing themselves a bit last year, when Harden was playing with Russell Westbrook rather than Chris Paul.)

Even the structure of Harden’s pick and rolls is different in Brooklyn than in Houston, largely because of the group of players he’s been running them with. A shift began toward the end of Harden’s time in Houston, but the Nets have only accelerated it: Harden is now screened for by a guard more often than he is by either a forward or a center.

Harden’s pairing with one of his teammates in particular has been borderline unstoppable: Bruce Brown. There are 232 pairs of teammates that have combined for at least 80 pick and rolls so far this season, per Second Spectrum, and the Harden-Brown pairing ranks first among that group in points per direct screen.4 Opponents seem flummoxed by what to do with Harden when Brown is running around like a pint-sized Draymond Green. Play it straight up, and Harden toys with your rotations. Switch, and he fries your big man off the dribble. Trap, and he slips a pass through the pocket. Help, and Brown slings a dish to a corner shooter.

His interplay with Brown highlights another area in which Harden’s play has been different in Brooklyn than in Houston: He’s not forcing as much of the action and has been more content to let teammates make the play — or even the play that leads to the play.

On average, though, Harden is both passing more often and not driving as deep into the paint in Brooklyn as he did in Houston. His average drive has begun 27.9 feet from the rim (closer than in Houston) and ended 8.2 feet away (farther than in Houston). He’s simply not barreling all the way to the basket at all costs anymore, because he doesn’t feel he has to.

Not getting all the way to the rim quite as often has sent his free-throw rate through the floor.5 Not flinging himself all the way to the basket has had the knock-on effect of raising the share of his shots originating in floater range (3-to-10 feet away from the basket), per Basketball-Reference.com, with a career-high 26.2 percent of his attempts meeting those qualifications. He’s connecting on those shots at a 49 percent clip, and it’s an especially deadly weapon for him because of how well he disguises whether he’s shooting a floater or throwing an alley-oop.

Taking more floater-range shots gives Harden a bit more variety in his game than he had in Houston, while still largely allowing him to stick to his strict “threes-or-paint-shots” shot distribution. It’s a way to expand his repertoire without resorting to the types of inefficient attempts that were anathema to the way he played with the Rockets.

Harden is also taking fewer threes in Brooklyn, and the ones he is taking are better-quality looks. According to Second Spectrum, Harden’s expected effective field-goal percentage on threes is about 1.4 percentage points higher with the Nets than it was with the Rockets,6 and he’s had a few extra inches worth of space to get those shots off, as well. He’s connecting on those shots at a ridiculous clip, knocking down 41.9 percent of his 7.8 attempts per game.

These changes, combined with Harden’s typical offensive brilliance and the highest defensive rebounding rate of his career, have resulted in eye-poppingly absurd numbers. He is already second in Nets franchise history in triple-doubles (seven) despite having played only 22 games with the team. On Monday night against the Spurs, he became the fourth player in league history to score at least 30 points, dish out at least 15 assists and not turn the ball over a single time — and the first to do it while adding at least 10 rebounds to secure a triple-double in the process.

It’s important to note that it’s not just Harden who has changed, though. The Nets have been remolded in his image, in more ways than one. Most obviously, they have dramatically overhauled their pick-and-roll defense, switching screens far more often since Harden arrived (37 percent of the time) than in prior games (20.1 percent). The Harden-era Rockets, of course, switched more often than just about any team in the league. The strategy makes sense not just for Harden, but for the smaller lineups Brooklyn likes to run out with either Brown or Jeff Green as the nominal center.

His own propensity to pursue the most efficient possible shot on every possession — whether for himself or a teammate — has nudged Brooklyn’s shot selection in a friendlier direction than before.

He’s also taken lead ball-handling responsibilities from Kyrie Irving, whose time-of-possession rate has dropped off a bit since Harden arrived. Per Second Spectrum data, Irving had the ball in his hands 17.3 percent of the time he was in the game prior to the Harden trade, but when sharing the floor with Harden, that rate has dropped to just 12.1 percent. Irving, of course, spearheaded this change, telling Harden, “You’re the point guard, and I’m going to play shooting guard.”

Chosen as an All-Star reserve (and named Eastern Conference Player of the Month for February), Harden has been the Nets’ best and most consistent presence since he arrived in Brooklyn. The team is 16-7 since the trade, with the league’s second-best offense (0.1 points per 100 possessions behind the Pelicans) and a top-10 point differential despite the fact that Harden has played only 17 games with Irving, eight with Kevin Durant and six with both of his co-stars by his side. If he keeps playing the way he has since he arrived — and there’s no real reason to expect him not to keep this up — then similar success will surely follow. And if he keeps up it through the playoffs, he and the Nets have as good a chance as any team in the league to take home the title.

Recognizing the records and legacy of Negro League baseball