In late 2009, two men walked into a room somewhere in Japan and found a fisherman hooked up to a polygraph. His name was Manabu Kurita, and he was there to answer some questions. The 32-year-old fishing guide had claimed to have caught a bass that weighed just under 22 pounds, 5 ounces — a weight that would make it co-world-record holder in the all-tackle weight category for largemouth bass, the most hallowed class in all of fishing. The other men in the room were representatives from the International Game Fish Association (IGFA) and, with the polygraph running, they asked Kurita about the precise position of his boat on Japan’s Lake Biwa and the tackle he used to haul in his catch. His answers from the hourlong session evidently passed muster; six months after he hauled the fish in, the catch was certified as the IGFA’s co-world-record holder.

The fish Kurita tied is known simply as George Perry’s miracle bass. For almost 80 years, anglers have been chasing that record, and with the help of environmental planners and biologists, they finally equalled it. Or Kurita did. But to understand why it took so long, it’s worth starting at the beginning, on a boat with George Perry, somewhere in rural Georgia.

In 1932, Perry, then a 20-year-old farmer playing hooky from the fields, pulled a huge-bellied beast with eyes the size of Ping-Pong balls out of a small oxbow lake in Georgia. He knew his fish was huge, but he had no idea it could be a world record. In fact, there were no official world records at the time. But because he stopped by the post office to weigh it before he took it home for dinner (it took his six-person family two nights to eat the whole fish), there was documentation when he submitted his entry to the big fish contest in Field & Stream later that year. When the magazine started certifying world records two years later, they realized that at 22 pounds, 4 ounces,1 Perry’s fish far outweighed any other largemouth bass ever caught.

For a long time, it looked like Perry’s fish was a unique specimen. For the next half century, no angler got within a pound and a half of his mark. “A lot of us didn’t believe a 22-pound bass could live naturally,” says Jon Storm, the former editor of BassFan.com. “A fish that size was off the map; it wasn’t even part of the cluster.”

But in 1980, Raymond Easley caught a 21-pounder in a manmade reservoir near Santa Barbara, Calif., called Lake Casitas. Over the next three decades, as Monte Burke describes in his book “Sowbelly: The Obsessive Quest for the World-Record Largemouth Bass,” modern-day Ahabs fixated on the record, many of them devoting incredible amounts of time and money in monomaniacal pursuit.

As the anglers’ mania increased, the sport’s popularity rose. During the 1980s, the fledgling Bassmasters professional tour grew into an ESPN-owned and corporate-branded behemoth.2 Winners of its two-day classic — the Super Bowl of bass fishing — won half a million dollars at its peak in 2006. (In 2011, ESPN sold the Bass Anglers Sportsman Society, which owns the tour, but it still televises the event.)

And while uniformed pros in hundred-thousand-dollar boats outfitted with the latest fish-catching technology competed against each other in timed events on television, amateurs everywhere headed out to their local lakes to try to haul in a goliath. “Not only is the largemouth easily accessible, the tackle required to catch it is pretty straightforward,” says Jack Vitek, the world records coordinator for the IGFA. “It’s open to all demographics.”

Over the next 30 years, every one of the IGFA’s records for largemouth bass — save for the all-tackle one owned by Perry — was rewritten by anglers using all sorts of lines and rods. For a while, it looked like Perry’s record would fall any day. One fish — known as Dottie for the prominent black mark near her gills — weighed close to 22 pounds when she was caught and released in 2003. When she was caught again in 2006, she weighed even more than Perry’s fish — but she wasn’t eligible for the record because Mac Weakley had set his hook in her side, not her mouth.

Dottie, along with 15 of those 20 new record fish, was caught in one of just a few reservoirs within a hundred miles of Los Angeles. Something was going on in Southern California, and that something was a potent brew of favorable conditions for super fish. 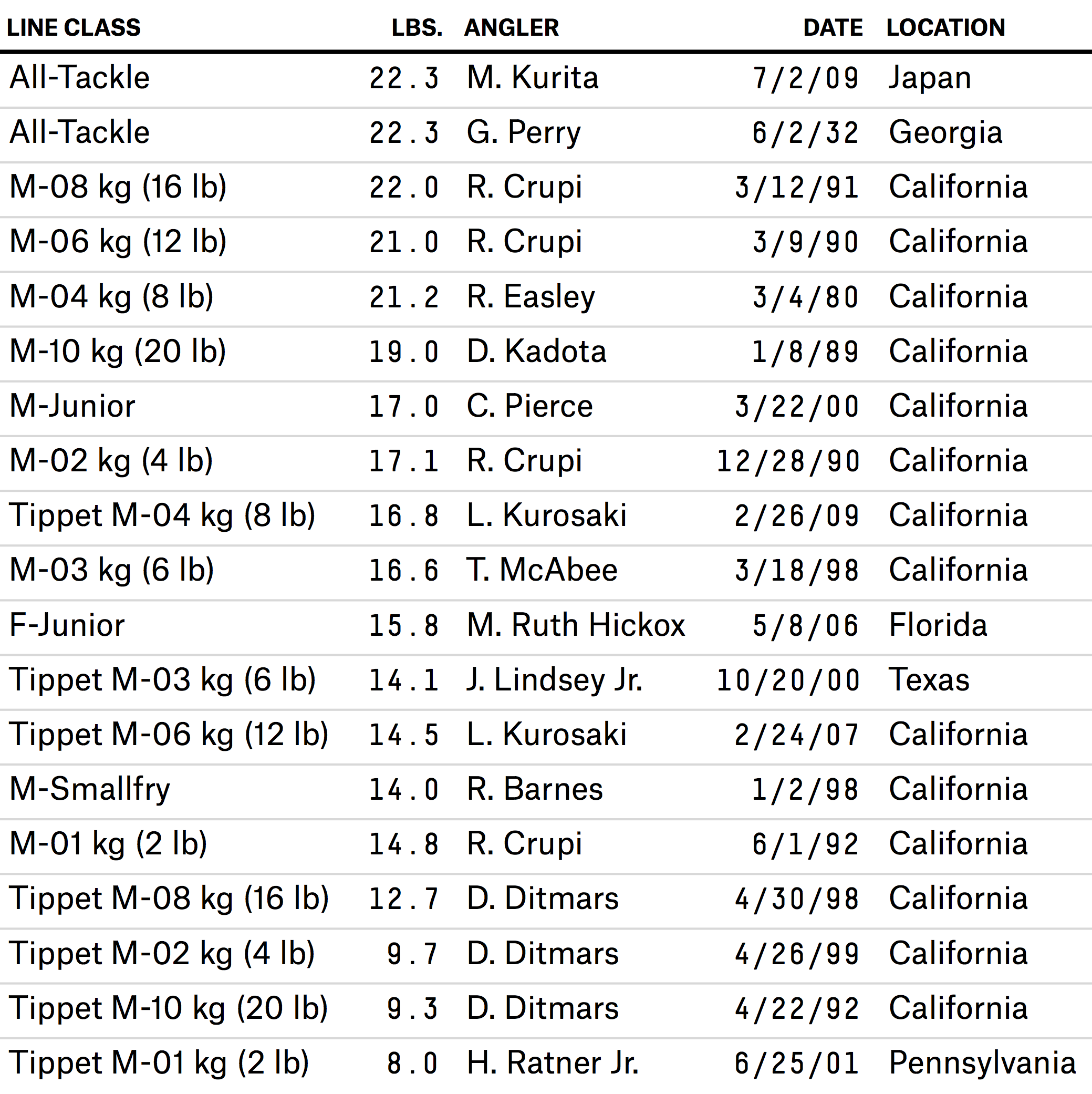 Big fish attract more fishermen, which is why fishery managers have introduced Florida largemouths not just to California, but also to lakes all over the world, including Mexico, South Africa and — yes — Japan. The Florida transplants have often found that their new environments offer access to a new, highly caloric food source: rainbow trout. While the two fish do not usually coexist in the same areas, the 12-inch trout stocked in these lakes (also to entice fishermen) have proven to be a perfect food for the mega-bass, which pack on weight far more quickly than they would hunting other prey. Bass introduced into new environments overseas have also found new prey to be good eating — in Lake Biwa, Japan, for example, the bass have taken to gorging themselves on carp.

The Southern California environment — newly formed reservoirs in a mild climate — also helped with the record bass growth. Cold-blooded animals don’t have to spend as much energy metabolizing in stable temperatures, and Allen says the sweet spots for the stable-temperature zone are in Southern California and Japan.

The role the reservoirs play, though, remains somewhat mysterious. “Lakes go through a natural aging process,” says Allen, who explains that trophy fish usually appear relatively soon after lakes have been formed. Perhaps that explains why far fewer giant bass have been caught in Southern California since the early 2000s.

While Lake Biwa, the place Kurita nabbed his record bass, has been around for millions of years, Kurita thinks a change in management practices in Japan led to a window for world-record bass that may now be closing as well. “Old days of Lake Biwa fishing, I could catch a lot, but could not get over 10 pounds,” he said. Then, around 2001, Japanese authorities started to treat bass less as a trophy fish and more as a foreign organism to exterminate, he said. As their numbers dropped, the size of the bass Kurita caught grew — for a time. Since 2010, new extermination strategies, including electrification of spawning bass, has made all sizes of bass harder to find, he says.

Fishing records are different from human athletic records. While people will almost surely continue to get bigger, faster and stronger, a record fish requires discovery. After years where a confluence of factors produced a run of huge fish, Perry’s record still stands. Almost everyone I spoke to for this article, though, thinks that there is a record fish still out there. Kurita claims he’s seen a 25-pounder paddling through Lake Biwa. Burke says a few monsters may lurk in the lakes of Cuba, where they have been off-limits to many record-focused bass fishermen for dozens of years. Allen thinks there might be a title contender in Zimbabwe, where recently introduced bass are growing freakishly fat. And in parts of the American South, officials have started aggressive management policies — like draining and repopulating lakes with Florida bass — in an effort to bring the record back home.