There’s been some discussion recently about the possibility that Barack Obama wins the popular vote and loses the electoral college; see Mark Ambinder for a pretty good articulation thereof. However, our simulation model thinks that this is actually a bigger worry for John McCain. It assigns McCain about a 5 percent chance to win the popular vote and lose the election, to Obama’s 3 percent chance. So what gives?

There are a lot of different ways to approach this problem — but there is one fundamental that should not be ignored. Namely, the allocation of electoral votes lags behind changes in the distribution of the population. Presently, the composition of the electoral college is based on the 2000 census — what if it were based on the population in 2008 instead?

As you can see, the gains tend to come in Republican-leaning states, and the losses in Democratic-leaning ones. We can be a little bit more specific about this by apportioning the electoral vote changes based on McCain and Obama’s win percentages in each state. For example, we estimate that McCain has a 95 percent chance of winning Texas, so we assign McCain 95 percent of Texas’ three new electoral votes (+2.85), giving Obama the small remainder of 0.15 electoral votes. 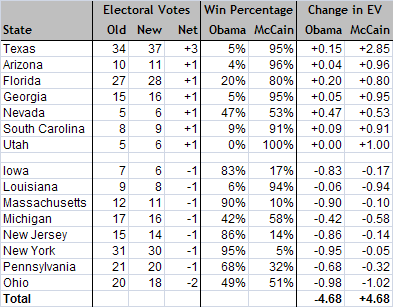 Overall, this results in a swing of slightly fewer than five electoral votes from McCain to Obama (actually 4.68), or a net change of 9-10. If electoral votes were assigned based on the current population, rather than the population in 2000, we would show Obama with tiny a 269.7-268.3 advantage, rather than the 274.4-263.6 advantage that we do now.

These new voters places like Texas and Arizona will show up in McCain’s popular vote column — but not in his electoral vote column until new allocations are made after the 2010 census. While there might be other reasons that the electoral math tends to be favorable to McCain, this starts him off with about a 10-EV handicap, which is pretty significant as far as these things go.