November is the time of year when movie studios release the best they’ve got. Take Christopher Nolan’s “Interstellar,” a time-dilating science-fiction film starring Matthew McConaughey and Anne Hathaway. The film had been considered a potential Oscar contender before its Friday release, but it has since suffered from less-than-gleaming reviews.

Science fiction and fantasy films are traditionally ignored during awards season, a fact that raises questions about the complicated relationship the genres have with the Best Picture nomination. Coming off the heels of “Gravity’s” loss last year, one must go back to 2003 and the sweep from “The Lord of the Rings: The Return of the King” to find a fantasy film that won the award, and a science-fiction film has never taken top honors.

This is also part of a larger question about the difficulties of writing a good movie. What makes a screenplay good? What makes it bad? Are writers in certain genres at an advantage or disadvantage when it comes to certain elements like plot, premise and characters? And if so, how can we show this? All we need is a data set to draw from.

The Black List offers aspiring screenwriters the chance to have their work evaluated by professional script-readers who work within the industry.1 The readers are drawn from agencies and studios. When scripts are rated highly, the site promotes the screenplays to potential buyers.

As a result, The Black List has thousands of script evaluations — grades based on plot, premise, characters, setting and dialogue — from dozens of genres. I asked for a look at those reviews, and they sent over an anonymized record of 4,655 evaluations of 2,784 scripts by 2,221 writers, submitted from March to July of this year. When a script is evaluated, the reader assigns any number of genres to it — from simple drama to prehistoric fantasy — and we can use these to uncover different trends.

First-time writers tend to go one of two ways, said Kate Hagen, a former reader who now oversees the hundred or so readers at The Black List. They write a deeply personal, pseudo-autobiographical screenplay about nothing in particular. “Everybody basically writes that script at first,” Hagen said. “You have to get it out of your system.” Or they swing for the fences and go in the opposite direction, thinking, “I’m going to write a $200 million science fiction movie,” and plan an entire universe and mythology. Those scripts, Hagen said, tend to fail for entirely different reasons.

As it turns out, science-fiction scripts — those for alien invasion films, sci-fi/fantasy comedies and superhero movies — are some of the lowest-performing genres in our data set, and the general category of science fiction and fantasy does worse than the general set in most elements. (Each script is scored from 1 to 10, with 10 being a perfect score.2) 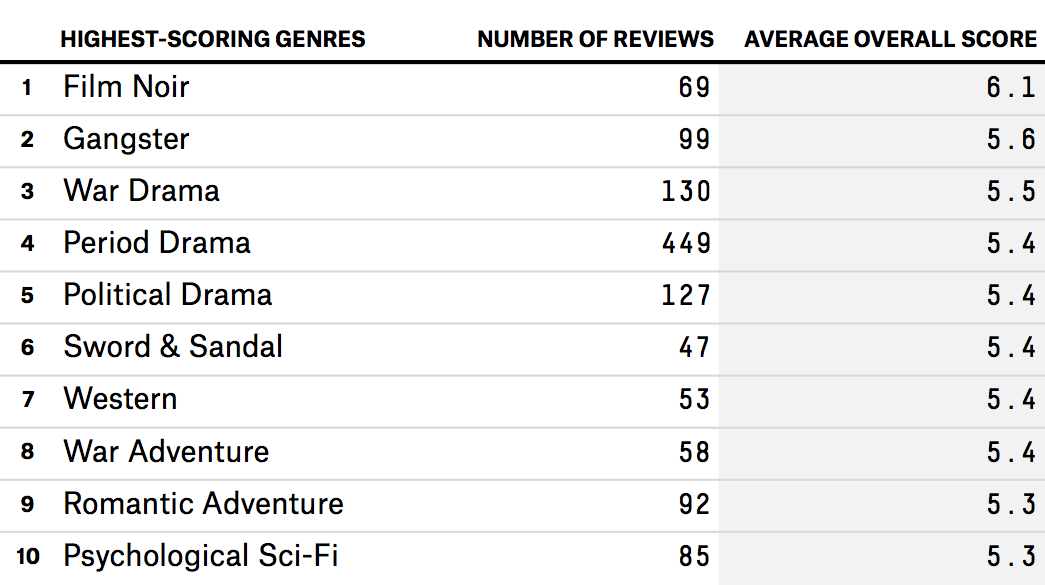 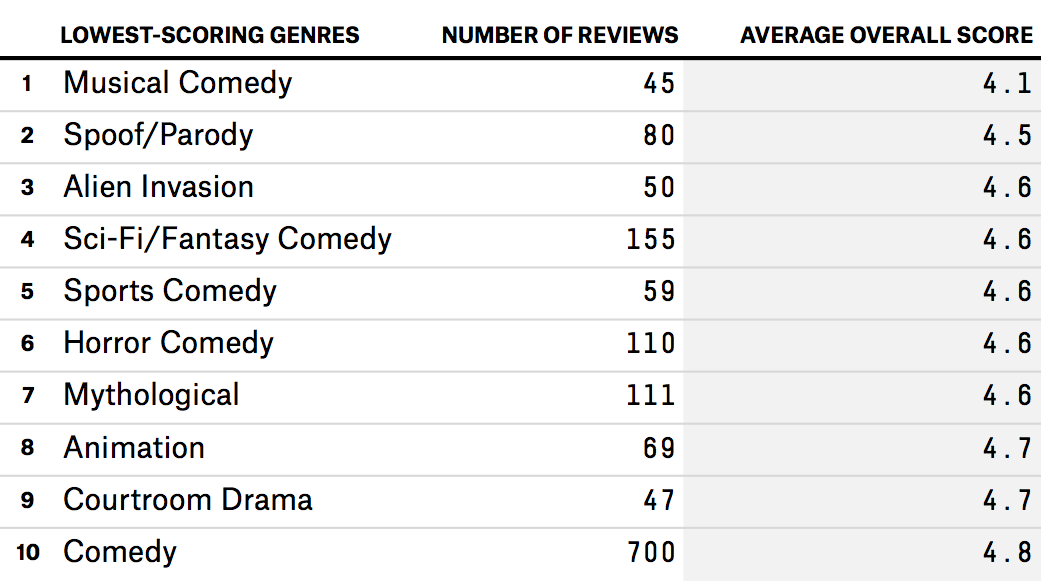 Hagen said novice screenwriters find writing good dialogue and characters particularly challenging. Genres that rely heavily on dialogue and characters — namely, comedies — tend to fare worse overall. On the other hand, niche dramas — particularly those set in a compelling time period, or at a particular location or event — claim the top spot. A good setting can compensate for poorer character development or dialogue, whereas when comedy misses, it misses big.

“Part of the things a lot of young writers fail to do is recognize where their strengths and weaknesses lie,” Hagen said. And part of that is realizing that dialogue is hard, and that oftentimes certain genres are easier to pull off than others.3

I also wanted to find out which genres had the most variation. If, as Hagen said, science fiction is particularly hard to do right and attracts novice writers, we’d expect to see a pretty wide splash in the scores the scripts received. This did turn out to be the case. 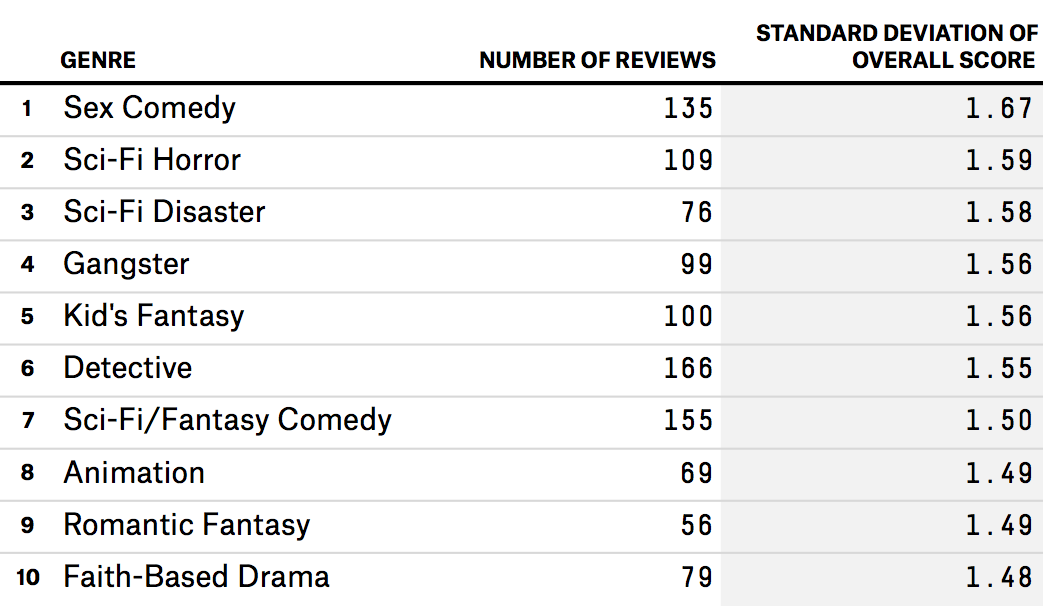 This list essentially describes the most hit-or-miss genres. The higher the standard deviation, the more widespread the overall reviews. As any fan of the “American Pie” franchise can attest, sex comedies holding the top spot is an accurate reflection of the dizzying highs and disastrous lows of that genre of film. And a mere survey of the career of Roland Emmerich — who has given us both the stirring “Independence Day” and 1998’s lamentable “Godzilla” — backs up the idea that disaster movies are very, very hit or miss.

Besides the 10-point rating system, Hagen developed an additional set of nine problems novice screenwriters encounter all the time that reviewers use when evaluating scripts. A script can be flagged for being too long or having poor structure, an underdeveloped plot, unnatural or cliched dialogue, a derivative or unoriginal concept, or a lack of escalation. It can contain formatting problems that make it told and not shown, or it can be flagged as commercially unviable.

As it turns out, some of these problems are more common than others. Here’s the percentage of reviews that flagged each of the nine problems. 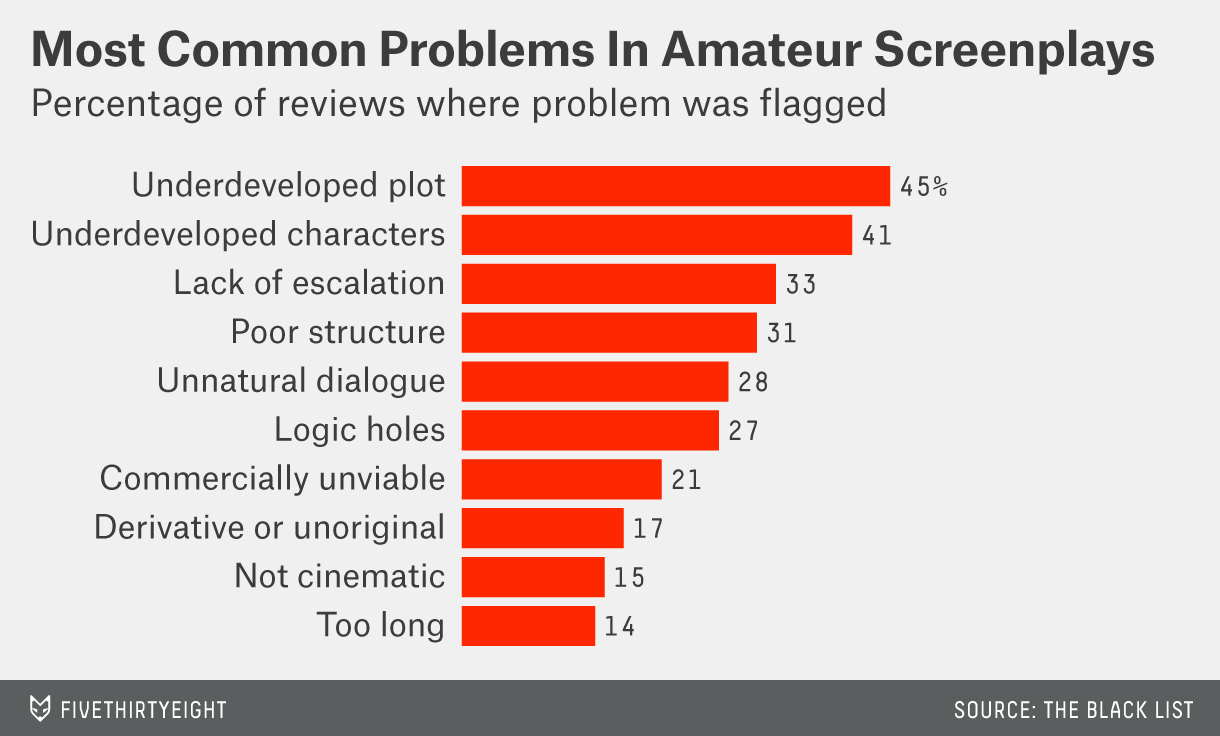 Two of the most essential elements in a script — the plot and the characters — cause the two most common problems. This goes back to Hagen’s assessment of the issues novice screenwriters face: writing an intimately personal screenplay where nothing happens, or a sprawling space epic that’s too big.

We can also find some interesting idiosyncrasies for certain genres.

Take courtroom dramas. Because of the legal eagles writing them, only 2 percent of such scripts were flagged as having logic holes or unanswered questions. However, a whopping 47 percent of them suffered from unnatural, cliched or on-the-nose dialogue, as anyone who has ever met an attorney can probably back up. The stories are feasible and well researched, Hagen said, but the dialogue is too jargony. A 40-minute courtroom scene may reflect reality, but it’s not compelling on screen. There’s a reason “Law & Order” glosses over a lot of the legal process. “Medical dramas run into similar problems,” Hagen said.

We can also find out some of the more tired genres by looking at the scripts that were flagged for being derivative or unoriginal. A whopping 36 percent of epic war movies were considered derivative, with monster movies (32 percent unoriginal), romantic fantasy (30 percent), mythology (30 percent) and sword and sorcery films (28 percent) rounding out the top five most derivative genres.5

If you want originality, we can also look at the genres where the problem of unoriginality was seen the least: political drama or thriller, gothic horror, comedy thriller and psychological science fiction.

Hagen said sports is one of the better performing genres for amateur screenplay submissions. “Sports dramas tend to do really well on the site because you’ve got a fusion of a real-life concept or event to then structure a narrative around,” she said. When plot and characters are two of the most difficult hurdles, glomming onto an existing structure is a solid way to moneyball screenwriting.6

A lot of this analysis underscores how difficult an undertaking screenwriting can be. But the findings can also be comforting for aspiring scribes. The problems that people face putting pen to paper are universal. If you’re having trouble writing a plot, you can take comfort in the fact that half the people who submitted screenplays to The Black List had the same struggles.

CORRECTION (Nov. 12, 12:13 p.m.): In an earlier version of this article, the name of the woman who oversees readers at The Black List was misspelled. It’s Kate Hagen, not Kate Hagan.