At Freddie Gray’s funeral on Monday, before the riots that made headlines across the country, Pastor Jamal Bryant spoke of the limited opportunities for young black men in Baltimore and across the United States. Men like Gray feel like they are living “confined to a box,” Bryant said, according to The New York Times.

“He had to have been asking himself, ‘What am I going to do with my life?’ ” Bryant said of Gray, who died April 19 of injuries sustained while in police custody. “He had to feel at age 25 like the walls were closing in on him.”

The economic realities facing men like Gray — and many of the young people who took to the streets after his funeral — are indeed harsh. The unemployment rate for black men in Baltimore between the ages of 20 and 24 was 37 percent in 2013,1 the latest data available; for white men of the same age range, the rate was 10 percent.2 Nor do the prospects for black men improve much as they grow older: Just 59 percent of black men between the ages of 25 and 54 are working, compared with 79 percent of white men. Just 1 in 10 black men in Baltimore has a college degree, compared with half of whites (for ages 25 and up). And the median income for black households, at about $33,000, is little more than half that of whites. Moreover, none of those figures takes into account the high incarceration rate for African-Americans, which makes the disparities even starker.

Baltimore isn’t an outlier. There are other cities with more poverty, higher unemployment and greater inequality. The racial disparities evident in Baltimore are common across the country. 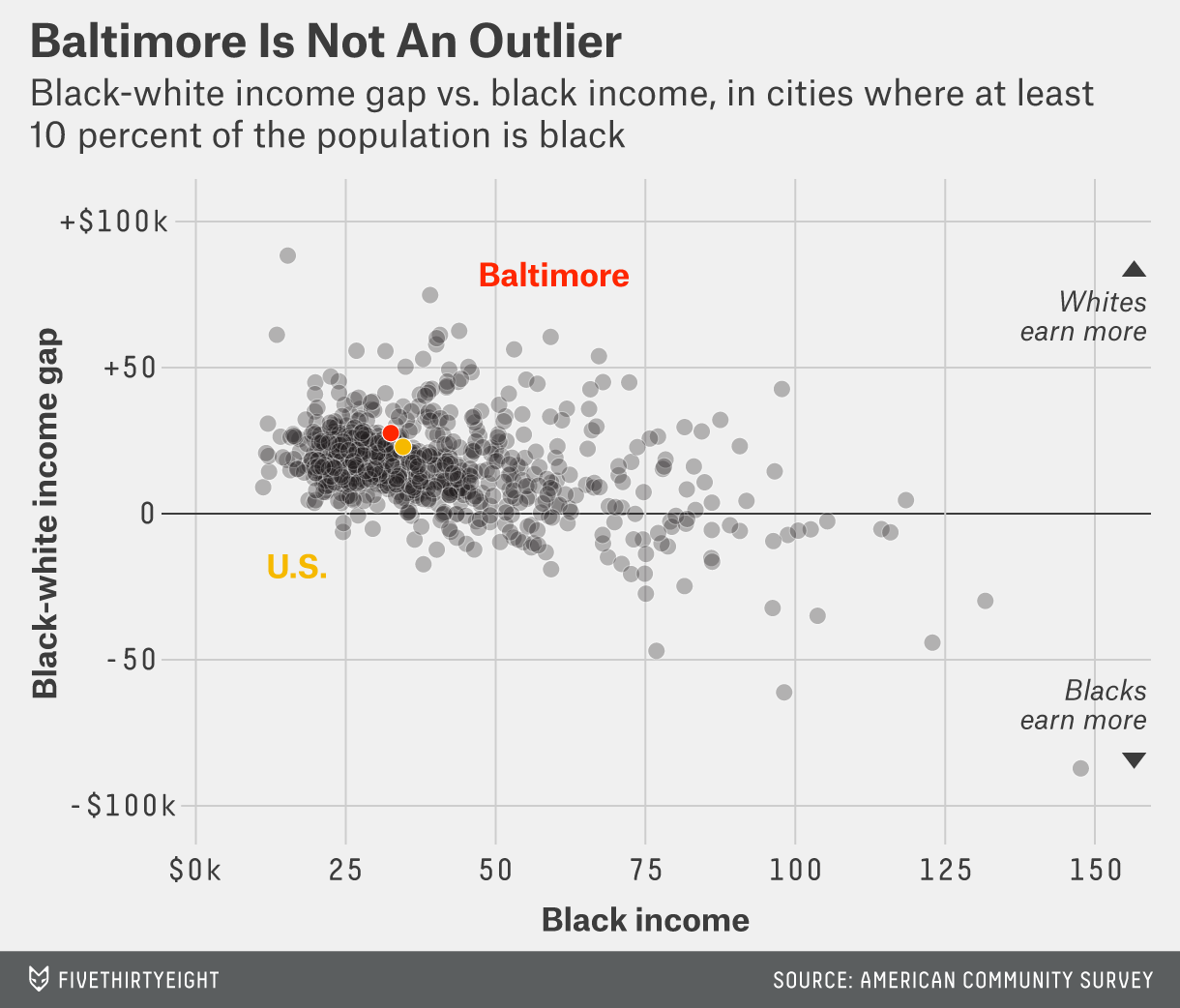 But Baltimore isn’t exactly typical, either. By a wide range of metrics — income, employment, education — the racial divide in Baltimore is wider than in the U.S. as a whole. And Baltimore residents as a whole, regardless of race, tend to be worse off:

Baltimore’s economic challenges are even greater when compared with the state as a whole; Maryland has the country’s highest median income, largely because of the wealthy Washington, D.C., suburbs that sit less than an hour away.

In many ways, Baltimore looks a lot like Ferguson, Missouri, the St. Louis suburb where protests broke out last summer after a police officer killed another young black man, Michael Brown. Both are relatively poor African-American communities surrounded by wealthier, whiter suburbs. Both have a history of complicated relationships between residents and police. Both suffer from high rates of unemployment among their large populations of young black men.

But Ferguson wasn’t an outlier, either. There are dozens, if not hundreds, of American cities, large and small, with the same stew of poverty, inequality and discrimination. The box that confined Freddie Gray and Michael Brown is just as hard to escape in those cities.