Although I’m fairly bullish on Sarah Palin’s prospects of winning the Republican nomination, I also subscribe to the conventional wisdom that, were she to be the nominee, she would have an awfully tough time against Barack Obama in 2012. Could she beat Obama? Of course; politics is a world of probabilities, not certainties. But she’d likely cut Obama quite a lot of slack.

Dowd makes it sound like the numbers he cites — 47 percent and 51 percent — are hard-and-fast rules. In fact, he seems to have chosen them arbitrarily, and the dataset he’s using is not very robust. Here, indeed, is that data: the last approval rating issued by Gallup prior to each incumbent President’s re-election date. 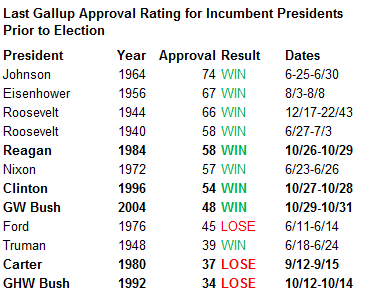 One major annoyance is that, until about 1980, Gallup for whatever reason ceased conducting approval polling about six months in advance of the election, meaning that most of these numbers are not very fresh. If we do look at the entire dataset, we find an incumbent getting re-elected with a 39 percent approval rating — Harry Truman in 1948. Dowd conveniently defines this out of his sample by limiting his analysis to “polls over the past 60 years”, the election in question being 61 years old.

It would probably be better to focus only on those elections since 1980, when Gallup began printing approval numbers after Labor Day of the election year. If we look at those elections — the five cases highlighted in boldface — then the Dowd Rule would have to be redefined as “no president with an approval rating under 38 percent has won reelection, and no president with an approval rating above 47 percent has lost reelection”. That makes his argument considerably less compelling. But it’s also what the data actually says.

It would be foolish, however, to come to any conclusions based on this evidence, since we’re still talking about only five data points, most of which are not very relevant. Most incumbent elections are not very close — the incumbent either cruises to victory or gets crushed — and so there just aren’t that many instructive cases in the range that we care about, which practically speaking means when the President’s approval rating is somewhere in the 40s.

A better approach might be to look at Obama’s polling against Sarah Palin. There have been 11 Palin versus Obama polls that have come out this year — 8 by Public Policy Polling and one each from Rasmussen, Clarus, and Marist. Those polls showed Obama approval ranging from 49 percent to 55 percent — not far from Dowd’s sweet spot — but Obama defeating Palin by margins ranging from 6 points to 23.

If we make a scatterplot of these polls, we can extrapolate backward to get an estimate of where Obama’s approval rating would need to be in order to bring Palin into a tie with him; the answer is about 43 percent. 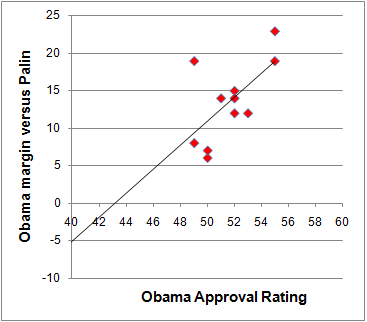 If we do the same thing with Mitt Romney’s numbers, on the other hand, we get a breakeven point of 46 percent: 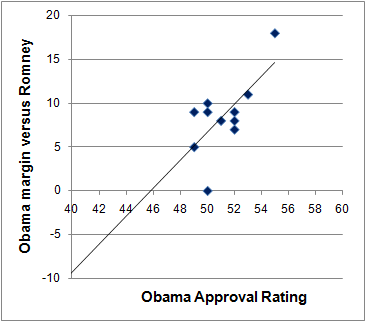 Caveats abound, of course — this conclusion too is based on some fairly limited evidence. But if you told me that Obama’s Gallup approval rating was 45 percent on Election Eve 2012 and that his opponent was Sarah Palin, I’d put my money on Obama and feel pretty good about it. And if Obama’s approval ratings were instead in the 47-51 range that Dowd specifies, I’d give Palin very long odds of defeating the incumbent.