Earlier this year, The Journal of the American Medical Association (JAMA) published a study on how women’s weight before getting pregnant affects their pregnancies. The paper argued that excess weight during pregnancy was associated with large increases in miscarriage and stillbirth. The fact that obesity raises many pregnancy risks — including fetal death — is generally well known. What made this paper striking, however, was that it suggested that the risks increase at much lower weights than previously thought: Based on the authors’ conclusions, you’re better off being underweight than normal weight before getting pregnant.

I was surprised by this finding in part because I spent a bunch of time looking into these risks while working on my book, “Expecting Better.” Based on the evidence I reviewed, I found there were good reasons to try to get within a normal weight range before getting pregnant; but if you’re already there, losing another five or 10 pounds isn’t going to matter.

The data in the JAMA article suggests something different. In the authors’ main table, they report the absolute risk of stillbirth per 10,000 pregnancies by a woman’s pre-pregnancy body mass index (BMI). We’ve replicated their results in the chart below: 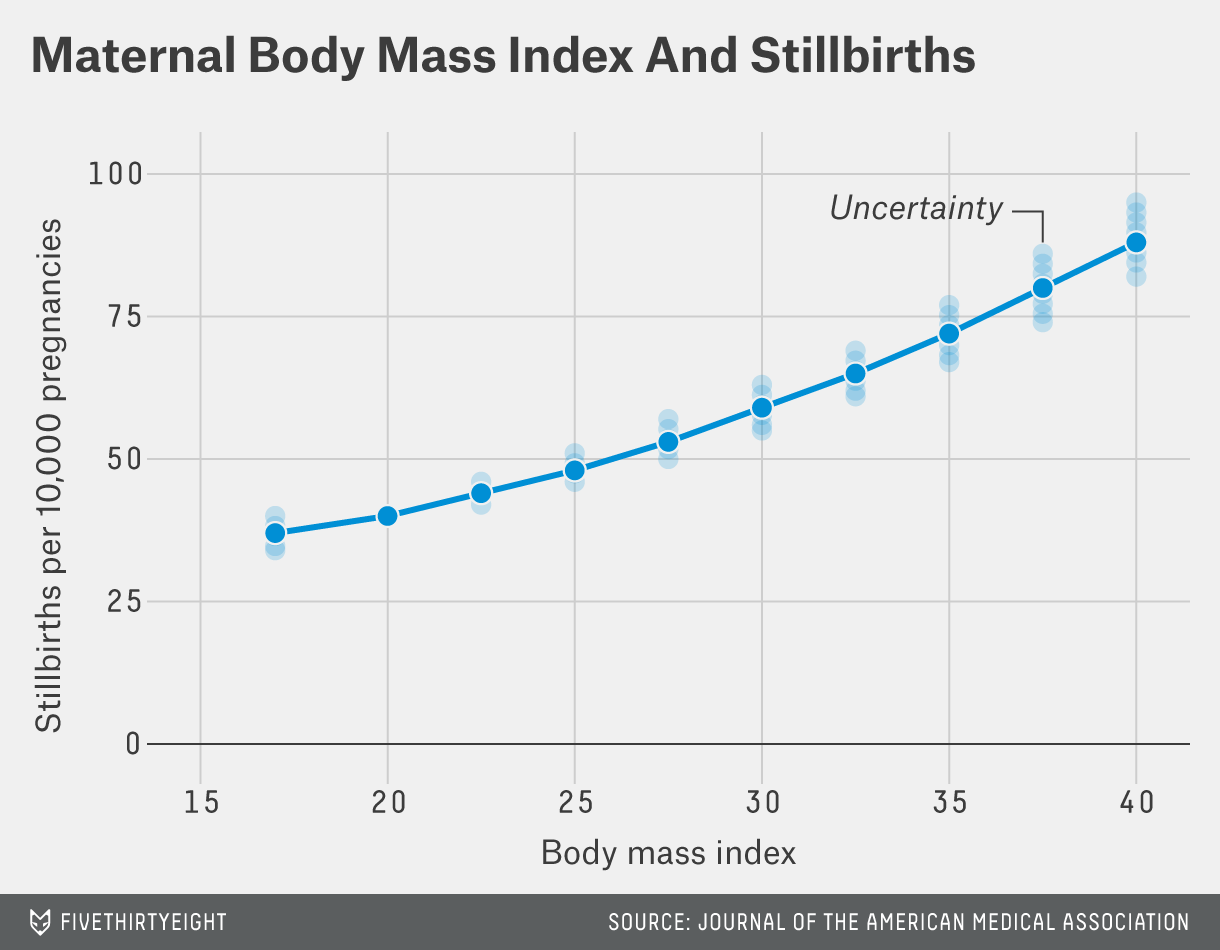 It may be a bit easier to think in weight rather than BMI. Consider a woman who is 5’6” and 155 pounds, which puts her BMI just below 25. What this data says is that if she lost 10 pounds before getting pregnant, her risk of stillbirth would decline by about 2 in 10,000. This magnitude is not enormous, but it is statistically significant, meaning it’s unlikely to have occurred by chance. If this same person could get her weight all the way down to 100 pounds — putting her BMI at 16.1, which is less than the recommended minimum of 18.5 — her risk of stillbirth would decrease by more than 10 in 10,000. This is a reduction of almost 20 percent. In other words, the data here suggests your risk of stillbirth is lower if you are underweight.

This JAMA paper is a meta-analysis, which means that rather than reporting on original data, it summarizes results from multiple existing studies, and tries to draw conclusions from them as if they were one big study. This method can be very valuable, especially in cases where the individual studies are small. By combining studies, we can get a much better picture of how precise the effects they measure are.

A downside of such meta-analyses, however, is they typically don’t cover the nitty-gritty details of the original studies. In the case of this paper, it wasn’t clear what data the chart included here drew upon. The specific question I had was what data allowed the researchers to draw the surprising conclusion at the lower end of the weight range.

To figure this out, I went back to the nuts and bolts of the methodology behind the meta-analysis. The authors’ analysis of stillbirth relies on 18 studies, and most of these have a similar structure: They begin with a large population of women whose weight was known prior to their pregnancies. The researchers follow the women through pregnancy and record whether the infants are stillborn. They then compare the rates of stillbirth for women at different weights prior to pregnancy.

The studies typically compare women in groups. To give one example, this study compares stillbirth rates for four groups of women based on their pre-pregnancy BMI: BMI less than 18.5 (underweight), BMI between 18.5 and 24.9 (normal weight), BMI between 25 and 29.9 (overweight) and BMI greater than 30 (obese). The researchers find significantly elevated stillbirth rates for overweight and obese women relative to normal-weight women.

Given that nearly all of the original studies analyze women in groups like this, it’s appropriate to ask how the authors of the meta-analysis generated a smooth curve, as shown in the chart above. The answer is that they used the information about the groups as data points, and fit a line through the points.1 This makes it easier for the authors to combine all the studies in a meaningful way. For example, if the exact cutoffs for the groups differed across papers, it would be hard to describe them as distinct groups.

A note of caution on this method, however: By looking for a best-fit line in the data, you’re assuming the data can actually be described by a smooth line. If that assumption is wrong, the conclusions will also mislead. 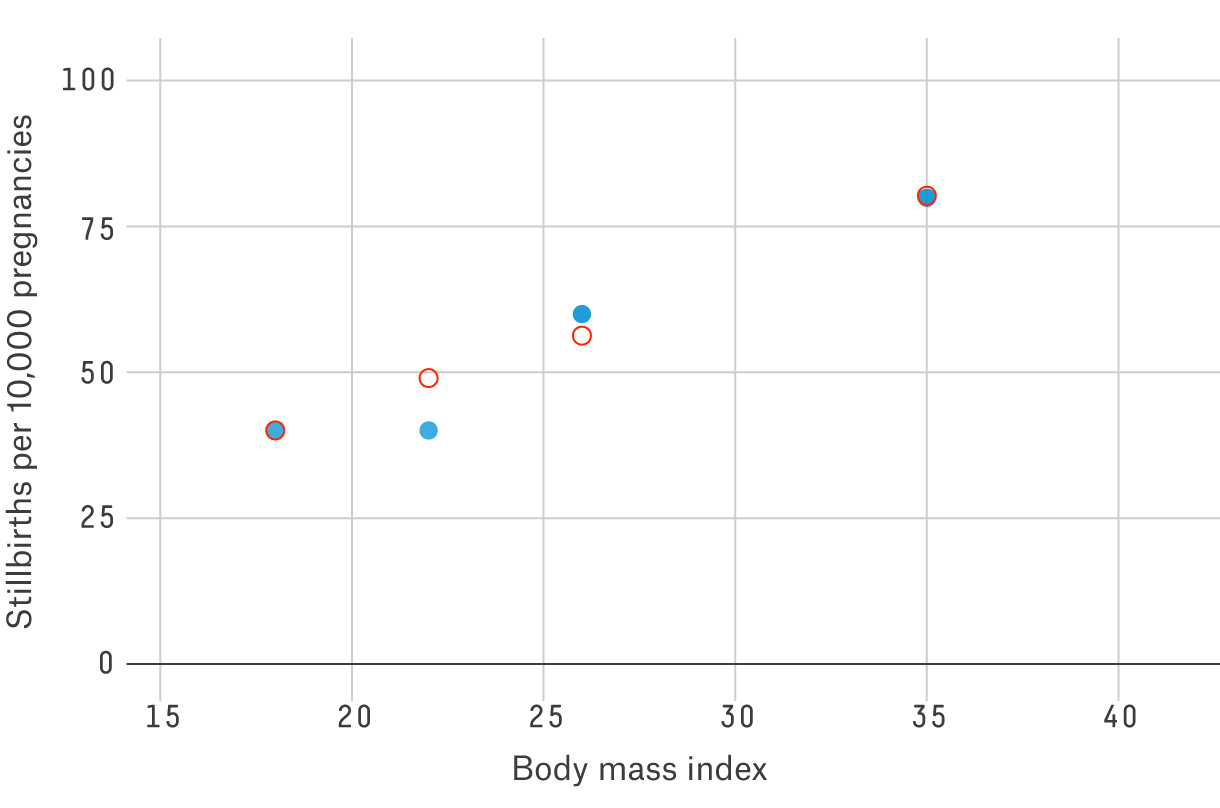 If we analyzed these data sets separately, we’d come to different conclusions about the value of losing weight if you are already in the normal range. The red series suggests moving from normal to underweight lowers stillbirth risk. The blue series suggests this is not the case. 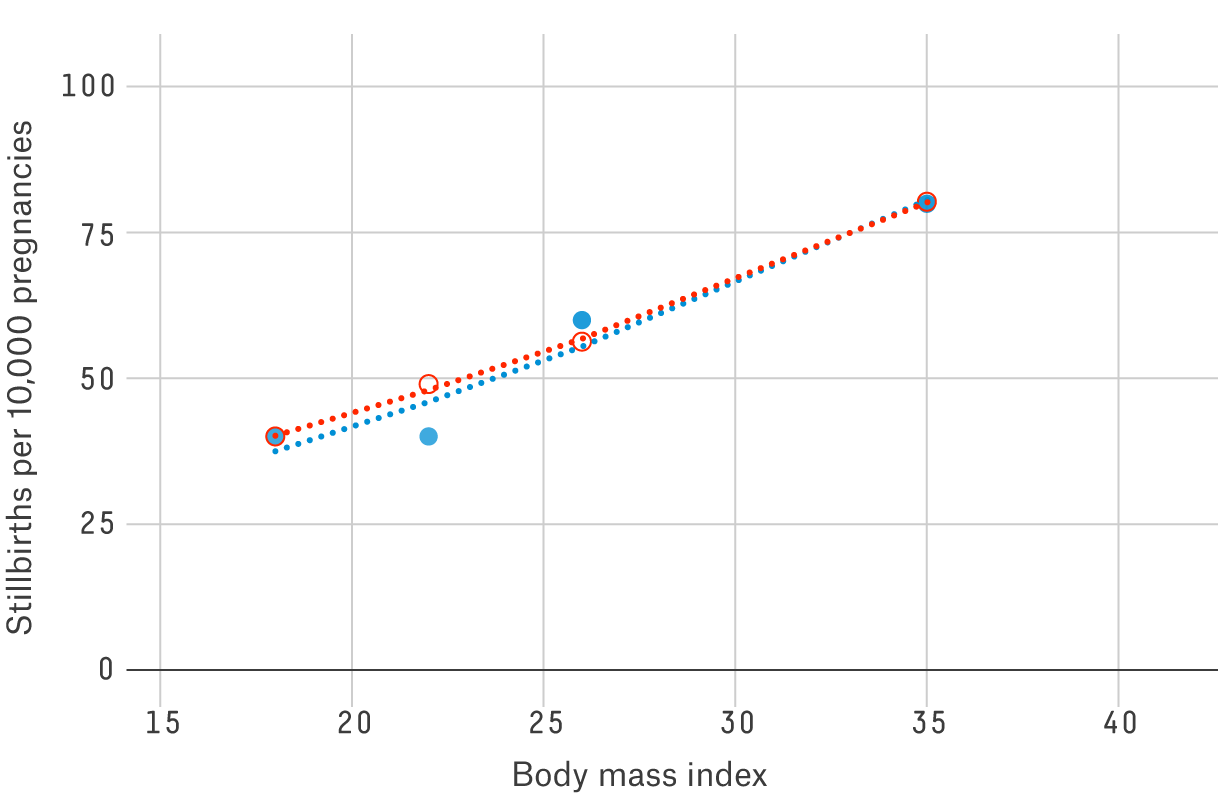 The best-fit line for the red series is right on the dots: If you drew conclusions about the points from this line, you’d be right on target. However, the best-fit line for the blue series also implies an elevated risk of stillbirth for normal-weight women, even though the underlying data doesn’t suggest this at all. It’s only happening because the higher stillbirth rates among overweight and obese women are influencing the line. Fundamentally, the reason a best-fit line doesn’t work well for the blue data is because it’s wrong to assume the relationship can be described by a smooth line.

To figure out whether being underweight really lowers stillbirth rates relative to being normal weight, we need to go back to the original studies and look at the comparison across groups.

The mixed direction of the results and the lack of significance paint a consistent picture, but not necessarily the one painted by the authors of the meta-analysis. In the end, their paper does provide quite compelling evidence that being overweight or obese increases risks of many pregnancy complications, including stillbirth. What it does not suggest is that a woman with a BMI of 24 should be trying desperately to reach a BMI of 20 before she conceives.