One year out, how many losses might we project for Nancy Pelosi’s House majority? Which Democrats are most vulnerable? Piggybacking on the post I wrote last week after attending the latest Cook Political Report political briefing at their Watergate offices, I’ll take a look the analysis by CPR’s David Wasserman, and perhaps tweak it a bit. 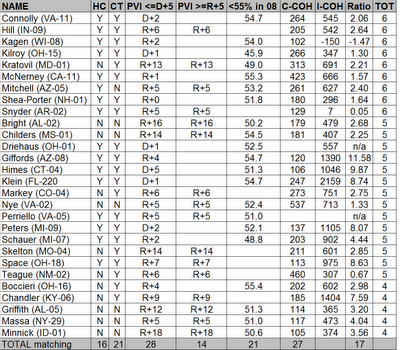 Wasserman identified five factors–in chart above, the five columns starting with “CT” for “cap-n-trade”–that might be indicators of vulnerability for House Democratic incumbents next year:

Based on those criteria, there are 28 Democrats who match on at least four factors, including one–Maryland 1st District rookie Congressman Frank Kratovil–who matches on all five. Though these are not necessarily the 28 Democrats Wasserman rates as most endangered–there is some but not perfect overlap between these 28 and the 12 Democratic-held districts he rates as “toss-up” races and another 21 he rates as “leaning Democratic”–many could be in serious trouble next November. (Kratovil, I should note, has at least one compensatory advantage over the others: The Democratic Campaign Committee Chairman, Rep. Chris Van Hollen (MD-8), has a vested interest in defending a seat in his home state.)

Wasserman included the cap-and-trade vote, he says, because voting for it may be particularly dangerous for Democrats from districts containing significant chunks of those white working-class areas depicted in that now-famous map of the 22 percent of counties nationally where John Kerry in 2004 outperformed Barack Obama in 2008. “In the rural areas of the South—the parts of the South were Barack Obama did worse than John Kerry in 2004—there is an open revolt against Democrats and particularly Barack Obama,” said Wasserman. He cited as specific evidence of this revolt from last week the coal-heavy and thus highly cap-and-trade resistant 3rd Delegate District in the southwest corner Virginia, the Appalachian county that uniquely borders both Kentucky and West Virginia. Mark Warner got 61% of the vote in 2001 in District 3, Tim Kaine dropped to 49% in 2005, Obama slipped further to 40% last year, and Creigh Deeds plummeted to just 32% last week. “In places like this all across the South,” Wasserman quipped, “as Toby Keith would say, ‘the fit’s gonna hit the shan.’ ”

For kicks, I decided to add two factors/columns to Wasserman’s analysis. The first is for the recent vote on the House health care bill (“HC”), on which 39 Democrats voted nay. (A good list and analysis of the 39 can be found in the New York Times.) Those Democrats are explaining their votes in a variety of ways, and of course a “nay” vote may be the potentially more electorally damaging for many Democrats. But, for the sake of argument, let’s presume that voting for the House bill is an added risk factor for 16 of the 28 who voted “aye.”

I also added a column showing the comparative cash-on-hand advantage (or in some cases disadvantage) for each of these 28 incumbent Democrats (“Ratio”). I calculated this as cash-on-hand minus outstanding debts as of September 30, 2009 (data courtesy of the Center for Responsive Politics here), and then created an incumbent-to-challenger COH ratio by dividing the incumbent’s COH by the challenger’s. This relative money advantage is useful because (a) it contextualizes the financial competitiveness of challengers who have cleared the $100K bar relative to the incumbent they aim to unseat, as least as of 9/30/09; and, relatedly, (b) because the party committees (DCCC, NRCC) look at fundraising competitiveness as one indicator of challenger strength, the smaller this ratio is for the incumbent the smaller still it could become, as the RNCC and strategic givers gravitate to races they believe will yield better returns on their investments. For lack of a better cut point, I counted as another risk point any Democrat who does not presently enjoy a 3:1 or better COH ratio. (I rounded up OH’s Boccieri ratio to 3; all others below that gained a point.)

I’m not quibbling with Wasserman’s analyses. Maybe the health care vote will not be very predictive next November, and surely there will be some well-funded incumbents who lose and others who win despite well-funded challengers. I’m just updating the analysis to include one new policy factor and one updated political factor. One could also set different (wider?) thresholds for the PVI ratings, and so on.

In any case, the way I’ve done it stratifies these 28 into three groups, including those who may be most at risk among the at-risk: the ones score a “6.” (Kratovil was the only one with a chance for a “7,” but he voted “nay” on the health care bill.) There are not a lot of members from those Appalachian-area districts who voted for the health care bill–which is ironic, given that some of them represent districts with high uninsured rates, but let’s not even go there right now. NH’s Carol Shea-Porter and northern Virginia’s Gerry Connolly are good examples members who may be helped by voting “aye.” On the other hand, those who are from such areas and voted “nay” may still face money problems, like AL’s Bobby Bright and MS’s Travis Childers.

We’ll just have to wait a year to see how much these key votes and the candidates’ finances matter come 2010 midterm Election Day.