In the weeks leading up to this strange, limited-capacity season of college football, oddsmakers salivated over the prospect of something akin to a control study for home-field advantage. What role does geography play if crowds are reduced by 75 percent, or if there are no crowds at all?

“I think home-field advantage for everyone may be gone,” Big Ten Network analyst Howard Griffith said in mid-September. So far, he seems to have been right. Home losses have piled up regardless of conference or program pedigree.

Through seven weeks,1 overall home winning percentage (.617) is the lowest at this point in any season since at least 2008. Some of that has to do with the lack of cupcake opponents, given that teams have largely played within their conferences: Only 63 of the 167 home contests played so far in the Football Bowl Subdivision have involved nonconference opponents, for a share of just 37.7 percent; from 2008 through 2019, nonconference games made up 61.4 percent of the home games among the first six games played each season.

If we look just at the home teams favored to win their matchups, they’re also scuffling. According to ESPN Stats & Information Group, home favorites won 78.3 percent of games from 2008 to 2019; this season, they are winning just 70.1 percent, a full 5.7 percentage points lower than any season over that stretch. Even home favorites with a lead entering the fourth quarter are struggling, relatively speaking: Those teams are winning only 86.9 percent of their games, compared with the 2008-19 average of 93.5 percent. 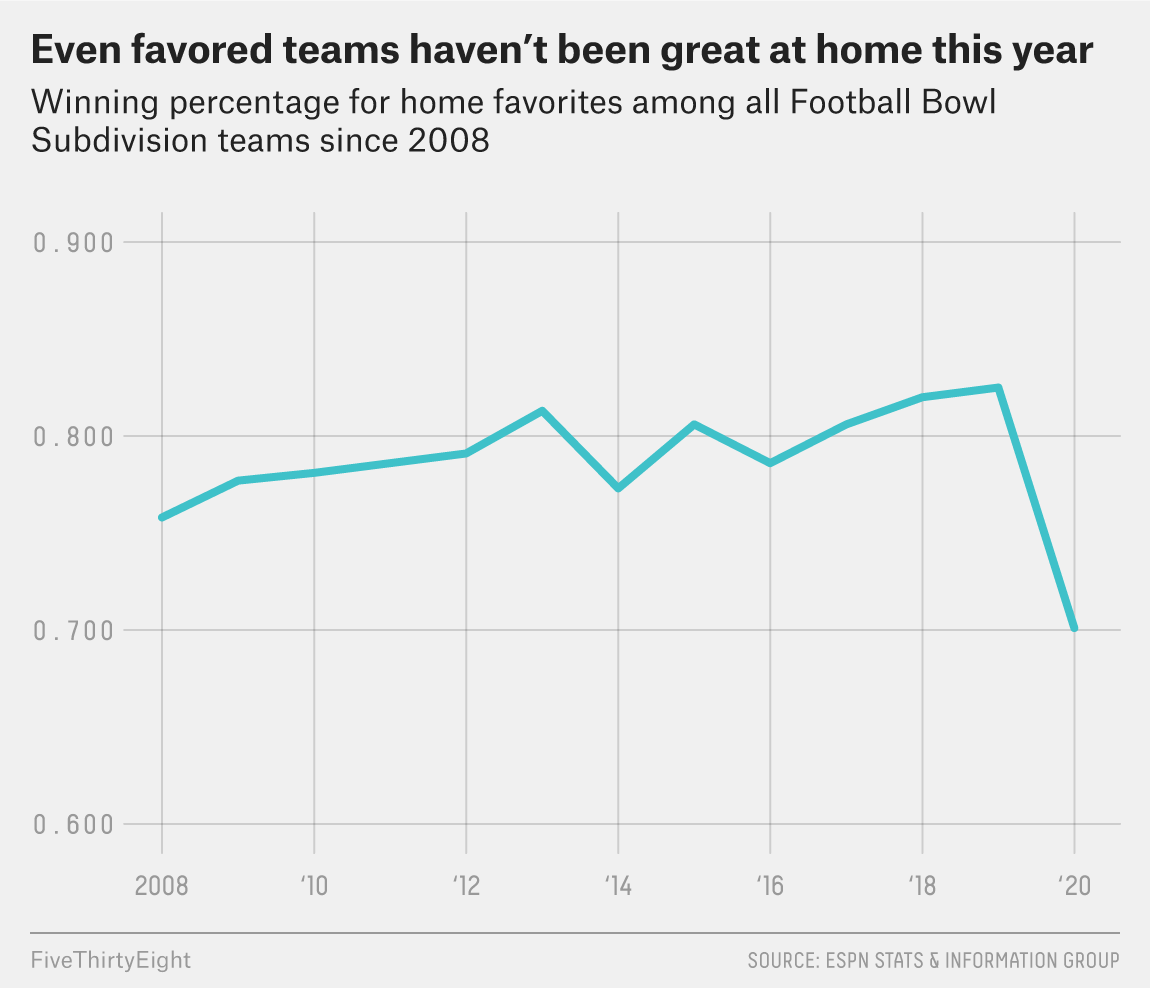 In 2019, SEC home teams won a higher share of their conference games than any Power Five conference’s home teams, but they’re just 14-12 so far in 2020; that includes home losses to unranked teams by ranked LSU, Mississippi State and Tennessee. Only once last season did a ranked SEC program fall at home to an unranked one. This season, top 10 teams have already suffered three home losses to unranked opponents, an occurrence that since 2012 has happened at most seven times over an entire season.

As Dennis Dodd of CBS Sports noted, this downturn comes after two of the four largest home-field advantages on record were produced in the past two seasons.2 All this before two major conferences unlock the gates to public-less venues in the coming weeks.

While team success within friendly confines has nosedived, if the trend holds, it won’t be much of a departure for the Big Ten, which opens play Friday.

In an increasingly offense-ruled sport, no conference in the College Football Playoff era3 has featured worse offensive production by home teams in conference play than the Big Ten, whose home teams rank last in points per drive, score percentage and successful play rate.4 That’s last among ALL Football Bowl Subdivision conferences, not just the Power Five.

To assess whether crowd noise has had a measurable impact on offensive performance, FiveThirtyEight turned to expected points added (EPA) per play. And to filter out unbalanced matchups, FiveThirtyEight compared only favored home and away teams in conference play. While all favorites aren’t created equal, this inches the exercise closer to a fairer approximate baseline with which to compare home-and-road splits.

One might suspect that a roaring crowd would adversely affect the communication of play calls, the cadence of snap counts and the general comfort of road team offenses. It hasn’t. In three of the five seasons since the College Football Playoff was introduced,5 Big Ten road favorites generated more EPA per play in conference games than home favorites did. That is not an experience shared by any other major conference. In the SEC, for example, home favorites saw more EPA per play in every single season.

But the good news for the Big Ten is that it will fit right in with the current national landscape, where road is king. This year marks the first since 2005 that EPA per play is higher for favored road teams in conference play than it is for favored home teams, and the split is the widest it’s been since ESPN’s Stats & Information Group began tracking it in 2004. 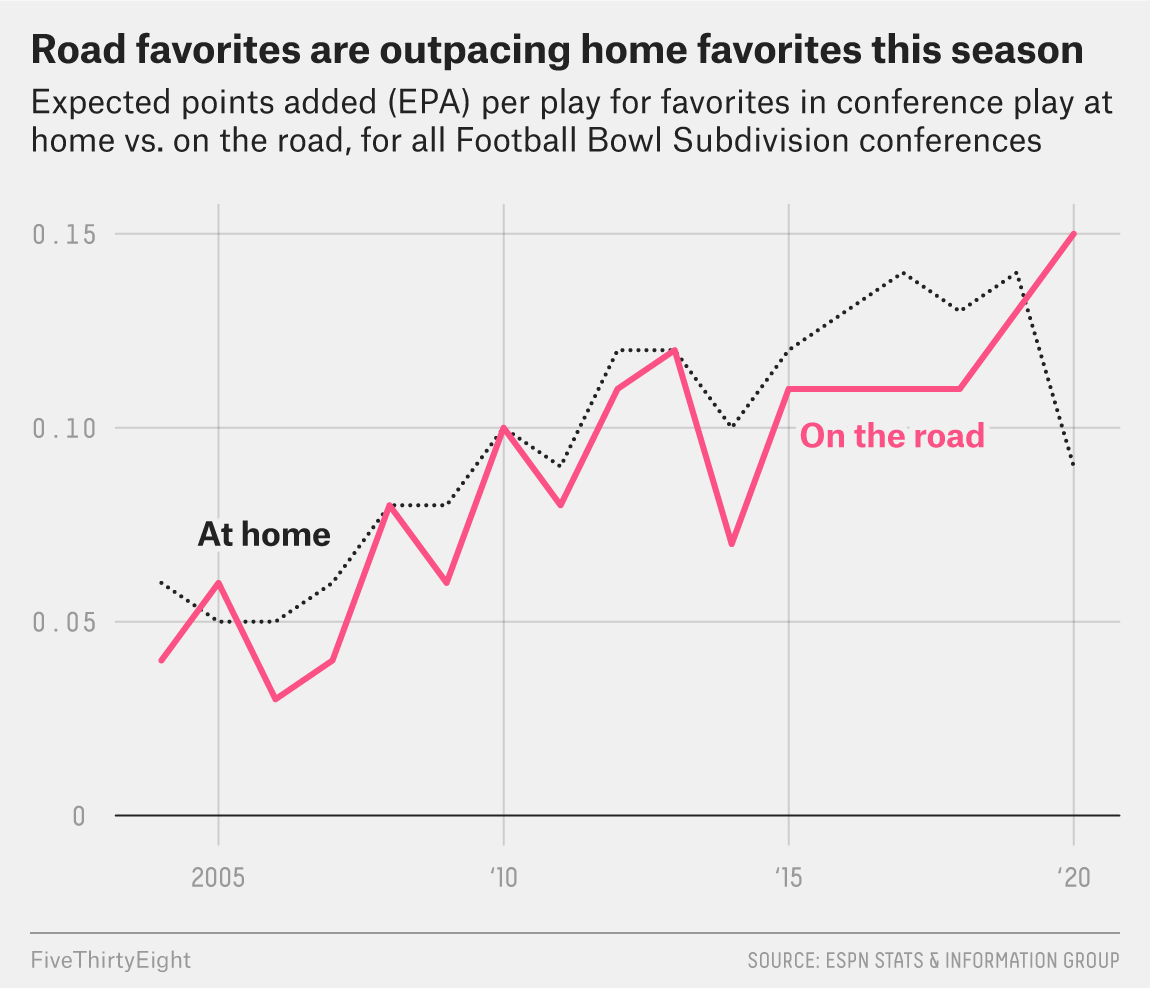 Another way to measure home performance is to turn to betting lines. In the College Football Playoff era, the Big Ten’s home teams rank last among major-conference home teams in cover percentage during conference play.

This is surprising, at least on an anecdotal level. A cursory search will indicate that the Big Ten is home to at least a handful of the most intimidating environments in the sport. It’s a conference that includes the sport’s birthplace and one of the oldest stadiums, the nation’s longest consecutive sellout streak, The Best Damn Band In The Land and whiteout spectacles. That doesn’t even include The Big House.

But in recent years, the Big Ten’s home-stadium notoriety has hardly guaranteed a win for the host. And in 2020, a season in which anything can seemingly happen, the conference will fit right in.