In the seventh inning of Wednesday night’s Dodgers-Orioles game, Jonathan Villar hit a three-run blast into the left-field seats in Camden Yards. When he crossed home plate, there was a new Major League Baseball record for home runs in a season: It was the 6,106th of 2019, breaking the record set two years ago. The usual suspects are widely cited for this year’s power surge: The balls are livelier, with even commissioner Rob Manfred admitting that there’s less drag, and average launch angle is up to a Statcast-era high of 12 degrees as more hitters join the “Fly-Ball Revolution.” Strikeout rates suggest batters might be employing more all-or-nothing approaches, and fastballs are being thrown higher in the zone, making them easier to elevate. And there’s another characteristic of the home run record: Batters may be making a higher quality of contact, as it relates to the spin rate of batted balls.

The spin rate of the baseball has been a focus of late, but primarily in regard to pitching. New ball-tracking technology allows pitchers to measure their spin rates and spin axis to create better pitch movement. But it turns out that spin rate matters for hitters, too — a little less of it might help.

Backspin often works in favor of the hitter, as it creates a Magnus effect, which pushes up on the baseball to create lift. But there can also be too much of a rise effect. When studying golf balls, researchers have found that when too much spin is added at certain launch angles, there is a “ballooning” effect. For baseball hitters, that means that excessive spin might lead to batted balls traveling higher, but not farther.

Alan Nathan, physics professor emeritus at the University of Illinois and MLB consultant, says there are optimum spin levels in baseball for batters. “Not only does the lift increase with the spin, but it’s really only been in the last few years that we’ve realized that the air drag also increases with the spin,” Nathan told FiveThirtyEight. “So that slows the ball down.”

Exit velocity off the bat is at a record level this season since Statcast began ball-tracking in 2015, but this year spin rate has actually declined, according to Statcast data analyzed by FiveThirtyEight.1 On line drives and fly balls hit at between 15 and 39 degrees of launch angle, backspin has declined for two consecutive seasons and by 2.3 percent since 2017. 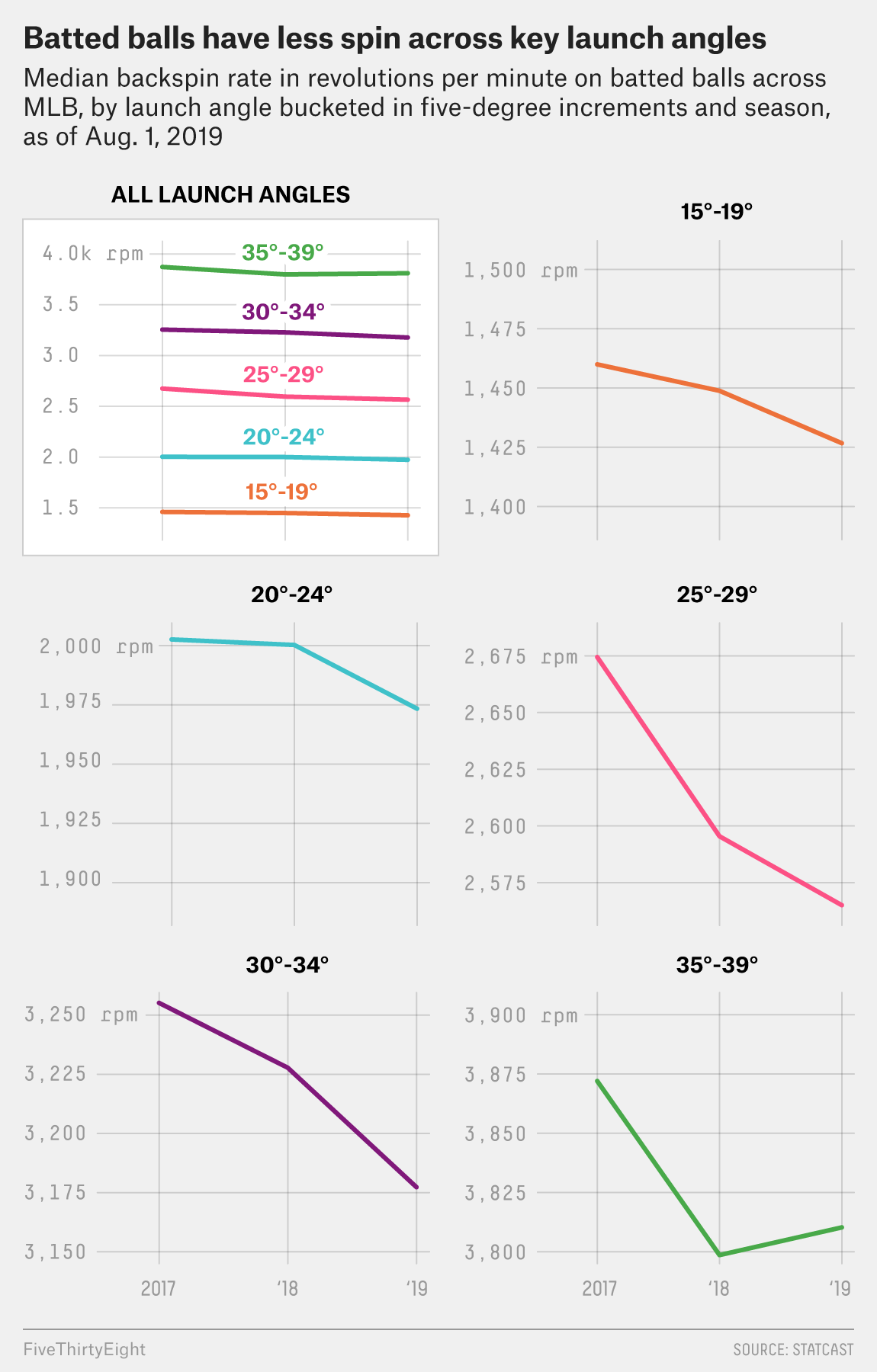 There are different types of spin: topspin, which usually produces ground balls; backspin, typically accompanying balls hit in the air; side spin, which ends in balls that hook or slices; or a mix of sidespin and either backspin or topspin. Spin rates on batted balls with a blend of back and side spin are also down this season. Generally, the greater the launch angle, the greater the backspin, in revolutions per minute. But there are diminishing returns when it comes to backspin.

“Certainly by 2,500 rpm it starts to level off, meaning with additional spin you don’t get any increase in distance [as a hitter],” Nathan said. “Then if you go even higher, maybe above 3,000 or 3,500 rpm, that’s the [range] where distance actually starts to decrease with spin as the drag starts to overwhelm the good benefits that you get with the additional lift.”

“I think the way the ball is spinning off your bat can tell you a lot about how your barrel is working through the zone,” Haniger told FiveThirtyEight in May, before injuries derailed his season. “I think everyone is convinced that hitting a line drive is a good result. I think certain hitters have to hit more on top, others more underneath [the ball]. It depends on what swing characteristics you have.”

Cody Bellinger, among the MLB leaders in wins above replacement, is also hitting the ball with less spin this year after retooling his swing in the offseason. In 2018, on batted balls with launch angles of 15 to 40 degrees,2 Bellinger averaged 93.9 mph in exit velocity and a projected distance traveled of 326.8 feet, all with 2,992 rpm in spin rate. This season, entering August, Bellinger had increased his average exit velocity on those balls in the air to 95.4 mph and his overall distance to 336.2 feet. His spin rate had decreased to 2,550 rpm. He has hit fewer pop-ups and ground balls and owns a career-high rate of line drives in his best season to date.

Nathan says drag reduction from lowered spin rates is likely small, but that factor combined with added exit velocity could speak to more and more hitters making better contact via more optimized swings — and adding distance at certain launch angles. Since 2017, the batted balls with the most average distance, as projected by Statcast tracking, are those hit with a launch angle of between 25 and 30 degrees and with backspin. Balls hit in that launch range this year are traveling slightly over a foot further than that of the same launch range in 2017, with an exit velocity 0.33 mph greater and a spin rate of over 100 rpm less, on average. And no — spin rates wouldn’t be affected by any changes to the ball, Nathan said.

“If you want to have a high exit velocity, you want to have a squared up ball-bat collision, which means the bat is moving right through the center of the ball, you are hitting the ball more squarely. That would lead to lower spin,” Nathan said. “The kind of contact that will give you the highest exit velocity will give you lower spin. It could be that batters are simply squaring up better.”