Kerry Fraser, a former NHL official who worked more than 1,900 regular-season games and 13 Stanley Cup Finals from 1980 through 2010, remembers calling penalty after penalty on the Philadelphia Flyers early in his career. “They were a very aggressive team,” he said during a phone interview. “Especially in Philly, they played really tough,” with players like Paul Holmgren and Craig Berube intimidating the opposition with their physicality. They would take penalties because they could kill penalties, knowing they had a stout goalie in Ron Hextall minding the net.

When Fraser reffed Flyers games at the Spectrum, he was on the lookout for penalties committed by the home team. But he was also hyper-aware of what the other team was doing because he didn’t want to miss an infraction.

“That’s bad game management,” Fraser said. “My mindset was, ‘OK, I’m not going to look for one on the other team just because one team has taken four or five in a row, but I sure as heck can’t afford to miss one.’ Your radar goes up, especially when the other team is in a checking position, and as soon as one is there, you make sure you get it.”

Fraser was conscious of any widening gap between the number of penalties called on each team, even if the calls infractions were warranted. The stats suggest that other referees are as well. 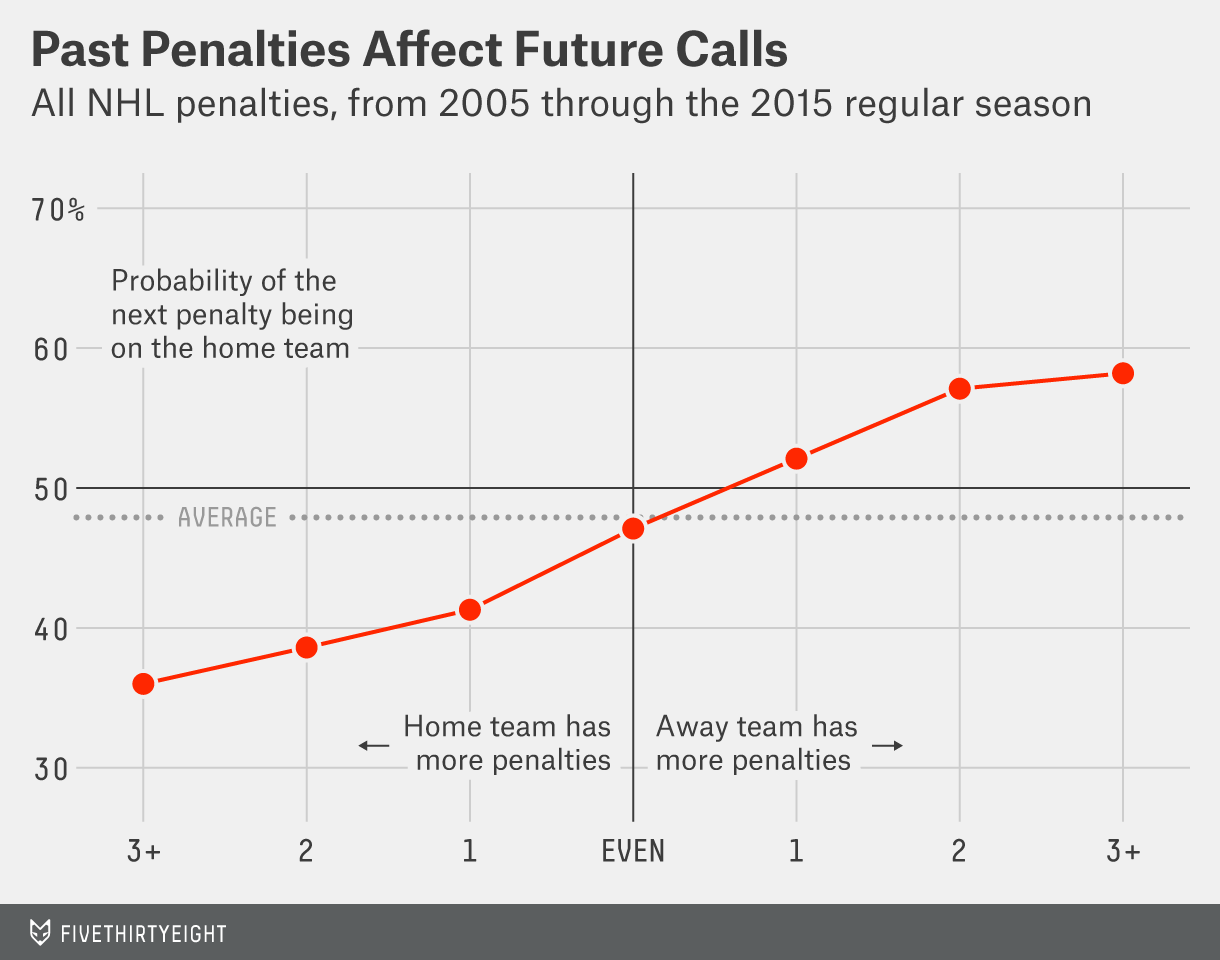 This is pretty compelling evidence that referees’ past calls influence their next calls. The chart includes every NHL penalty call between the start of the 2005-06 season and the end of the 2014-15 regular season,1 and it looks at all infractions in a game and how the difference in penalties called on each team affects the next call.2 As an example, if the home team has been called for three penalties and the away team five, the away team would be “owed” two calls. The tendency for prior violations to affect NHL penalties is enormous; when home teams are owed penalties, they are called for penalties at much lower rates, and the inverse holds for away teams.

To Fraser, this isn’t about makeup calls. It’s a sign of good game management. “In the overall complexion of the game, it gives the team that has committed multiple infractions recognition that if they commit the crime, they’ll do the time,” he says. “On the other hand, they know the ref is fair because he called a penalty against the other team when he saw it. It doesn’t cause further frustration for the team that is taking more of the penalties.”

When we called the NHL for comment, it declined to participate in this story. The league prohibits officials from talking to the media during the playoffs. Stephen Walkom, vice president and director of officiating, declined to speak through a PR rep, who wrote that Walkom “really doesn’t want to do anything to make the officiating the center of attention during the playoffs.”

In playoff games, the referees’ balancing effect grows even stronger. Our hypothesis: referees are trying to even out playoff games, where the pressure is on for the officials to avoid becoming a storyline. When the home team is owed a penalty in the playoffs, the frequency of calls on the visiting team is significantly higher than it is during the regular season. (If the away team is owed a penalty or penalties, the effect is about the same as it is during the regular season.)

Overtime produces the most dramatic results, with the second penalty call of the extra period about three times as likely to be whistled on the team that received the first power play.

Take Game 1 of the first-round match between the Chicago Blackhawks and the Nashville Predators in Nashville, Tennessee, as an example. At the 12:42 mark of the first overtime period, Chicago’s Brad Richards earned a two-minute penalty for a high stick on the Predators’ Ryan Ellis. Minutes later, Chicago’s Duncan Keith hauled down Nashville’s Taylor Beck just as Beck skated past the blue line alone. It appeared to be a textbook holding call, if not a penalty shot.

However, neither referee Dan O’Halloran nor his partner, Brad Meier, sent Keith to the box. The Blackhawks avoided a second 5-on-4 situation and extended the game.

It wasn’t hard to predict what was coming next: Less than three minutes after the teams returned to even strength, the Predators’ Seth Jones was sent to the box for tripping Bryan Bickell. It was a soft call, but it was one that went against the home team, evening up the number of penalties on each team in the overtime period.

Keith was again the focal point of the game in the second OT, when he scored the game-winner.

Of course, there are other factors, such as style of play after spending time on special teams, or perhaps even a revenge factor, that could drive these results. But there’s more evening up of calls in the playoffs, where we’d expect players to have less incentive to retaliate given the higher stakes and closer games. Further, one factor that does not seem to account for the tendency of past calls to affect future ones is the game’s score: The shape of home-team penalty frequencies is the same as on the chart above, no matter the score.

While referees attempt to even out penalty or foul calls in other sports like basketball,3 baseball4 and soccer,5 the balancing effect may matter most in hockey, possibly affecting the outcome. Southern New Hampshire University’s Kevin Snyder and Mike Lopez (one of the authors you’re reading right now) found that for postseason games tied through the first period, the team that was owed a penalty was 20 percent more likely to come out on top. And, unlike in basketball, which penalizes players and teams for having too many fouls (through the free-throw bonus and the player cap at six fouls), hockey players and teams are free to rack up penalty after penalty, if they so choose.

Call it a biased impartiality. Referees want to appear impartial, which drives them to make partial decisions. The result: New York Post headlines like “In Rangers-Penguins, blind-eye refs are ruining NHL playoffs.” Referees can’t win. But they can be disliked equally. “Fans from all 30 cities say, ‘Kerry, you were hardest on our team,'” Fraser says. “That’s how I know I did a good job.”