Although George W. Bush’s approval ratings have rebounded slightly, as often happens at the end of a president’s tenure, he will nevertheless finish his presidency with among the lowest scores since approval ratings came into widespread usage. Gallup pegs Bush’s final approval numbers at a -27 net (34 percent approve, 61 percent disapprove), the worst for any outgoing president save Richard Nixon.

Surprisingly, however, there has historically been fairly little relationship between a President’s popularity at the end of his term and the way that he has tended to be regarded by history. The following chart compares two things: a president’s final net approval rating as measured by Gallup, and the average historical ranking of that president as assigned based on three recent polls of historians. (These were the polls conducted by CSPAN in 1999, by Siena College in 2002, and by the Wall Street Journal in 2005. The chart excludes Franklin Roosevelt and John F. Kennedy, whose terms ended unnaturally.) 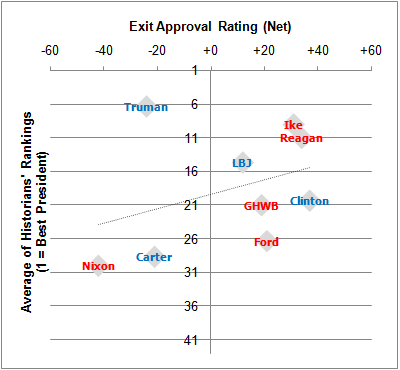 Although there is some correlation between the final Gallup numbers and the historians’ views of each president, it is not very strong — in fact, it is not at all statistically significant. The most obvious discrepancy is that of Harry S. Truman, who was extremely unpopular at the time he left office in a cloud of foreign entanglements and minor domestic scandals. Truman, however, is regarded very favorably by historians. The next-most striking disconnect is that of Gerald Ford, who was actually fairly popular for most of his presidency — perhaps Americans were happy to have any alternative to Richard Nixon after Watergate — but is not very well regarded by history. Ronald Reagan and Lyndon Johnson have also worn a little better historically as compared with perceptions about them at the end of their terms.

Perhaps the end of a president’s term tends to produce oddities in tracking his approval numbers. Human beings have a strange habit, after all, of becoming nostalgic for things they were never particularly fond of in the first place. Americans, moreover, tend to take a “What have you done for me lately?” view of their presidents — even toward the end of president’s term, they may have trouble placing his entire legacy into historical perspective. So let’s instead look at a President’s average approval rating over the lifetime of his term, as also provided by Gallup. 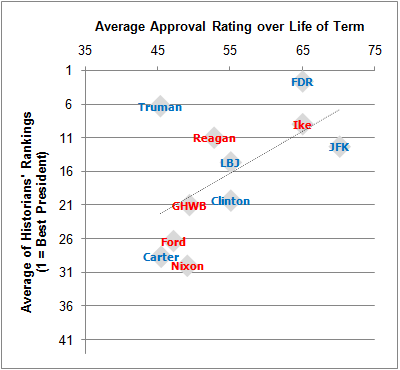 Here, the relationship is a bit stronger (very strong, in fact, if we exclude Harry Truman). Bush’s average approval rating over his eight years in office, however, is actually not all that bad. You can place various sorts of caveats on this — he was extremely popular after 9/11, for instance, for reasons having more to do with the nation’s need to heal rather than anything in particular that Bush did. But fundamentally he was fairly popular over his first term, popular enough to get re-elected to a second, and then the second term went very badly.

Now, personally I don’t think that history is likely to judge Bush much all that much more kindly than he being is judged right now. Whereas Truman almost immediately came to be regarded more favorably by historians than by the public, the scholarly community is every bit as down on Bush as is the general public, and it’s hard to imagine what exactly could transpire from here on out to change those perceptions — the seemingly unlikely prospect a long-run democratic peace in Iraq perhaps being the exception. Still, to assume that the final chapter has been written on Bush’s legacy would be wrong.