As I wrote on Tuesday morning, President Obama’s decision to suspend deportations of some young illegal immigrants should entail mostly upside for him from a political standpoint. Based on polls about his decision and the way that Republicans are reacting to it, the evidence that public opinion is on Mr. Obama’s side is reasonably clear.

So I don’t agree with other analysts who have termed the decision risky or puzzling. Mr. Obama has learned this year that being the incumbent at a time when most voters think the country is on the wrong track is not necessarily an advantageous position. But an incumbent president can still help himself at the margin with his policy and agenda-setting powers.

I do agree with Sean Trende of Real Clear Politics about one key point, however. It is one reason why the caveat “at the margin” very much applies to Mr. Obama’s decision, and may somewhat diminish its electoral importance.

As Mr. Trende writes, “Latinos are underrepresented in swing states”.

Below is a table showing an estimate of Hispanic turnout in 2008. These figures were determined by multiplying a state’s overall turnout by the share of voters who described themselves as Hispanic or Latino in exit polls. In total, about 11 million Hispanics turned out to vote in 2008, according to these estimates. 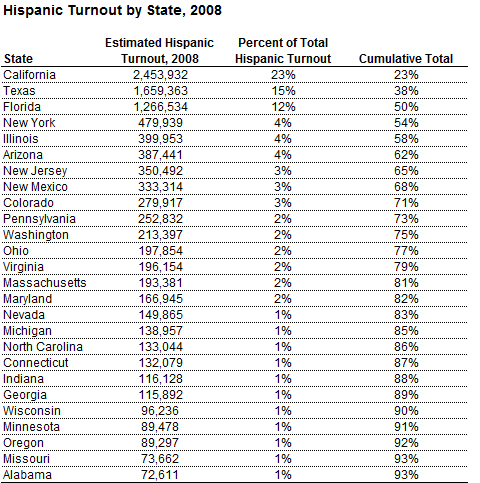 However, almost 40 percent of the Hispanic vote was in one of just two states – California and Texas – that don’t look to be at all competitive this year. The fact that Democrats are winning clear majorities among Hispanics is one reason that California is no longer competitive, of course. And perhaps Texas will become more competitive in another 8 or 12 or 16 years. (Although note that many Hispanics in Texas have been there for generations and might not be thought of as immigrant communities.) But voters in these states just aren’t likely to sway the Electoral College outcome in 2012.

New York and Illinois, which also aren’t at all competitive, and New Jersey, which is only very marginally so, also have a decent number of Hispanic voters. You do see Florida up near the top of the list, however, and Arizona and Colorado not far down, so I will need to be a bit more precise about my analysis to defend my claim.

The way that the FiveThirtyEight presidential forecasting model measures the competitiveness of a state is through what it calls the tipping point index. This is a measure of the likelihood that a state will make the marginal difference in the election, giving a candidate the decisive 270th electoral vote.

The list of tipping point states is narrower than you might expect. The relative order of the states just doesn’t change very much from election to election, especially when an incumbent is running again and we know what voters thought about him four years earlier.

Many states might be competitive, meaning that they might plausibly be won by either candidate, but most of their electoral votes would be superfluous in an election that truly came down to the last vote. The tipping point index accounts both for how close a state is relative to the national trend, and how many electoral votes it has. 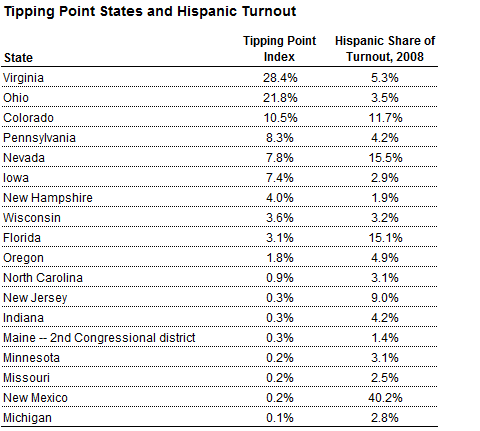 Right now, the model thinks that the odds are about 50/50 that one of just two states, Virginia and Ohio, will play the tipping point role. Each of these has a below-average number of Hispanic voters.

Nevada, with an above-average number of Hispanics, is fifth on the list, but it is followed by three very white-dominated states (Iowa, New Hampshire and Wisconsin).

Then comes Florida, which is lower on the list than you might expect, especially since it has 29 electoral votes. The model “thinks” about the different electoral combinations very carefully when it runs its simulations, and considers how the states might move in relationship to one another based on their demographics, as well as in comparison to the national trend.

Mr. Obama could certainly win Florida – we give him about a 35 percent chance of doing so — but these simulations find that he usually has easier paths to the victorious 270 electoral votes. The president’s polling and the “fundamentals” factors that the model considers are more favorable to Mr. Obama’s in each of the eight states that appear above Florida on the tipping point list. Most of the time that he wins states like Virginia, Ohio and Colorado, for instance, Mr. Obama will already have a winning map unless he takes some unexpected losses elsewhere.

Moreover, many of the Hispanics in Florida are Cuban-Americans, and they do not always behave like the predominantly Mexican-American population of the Southwest, or the Hispanic populations of the Northeast, which include many Puerto Ricans and Dominicans.

The model also doesn’t think much of New Mexico as a tipping point state. It really wasn’t close at all in 2008, and polls there have shown Mr. Obama with a double-digit lead at a time when he is barely ahead of Mitt Romney nationally. Mr. Obama could lose New Mexico in a landslide, but it just doesn’t meet the definition of a tipping point state. Even the broader term “swing state” probably mischaracterizes it somewhat.

Nor does the model think that Arizona is a tipping point state. If has a fairly large Hispanic population, but the white population there is old and quite conservative. Arizona is something of the opposite of New Mexico – a state Mr. Obama could win this year, but probably only in a landslide where it does not provide the decisive electoral votes.

On the whole, if you take a weighted average of the Hispanic turnout in each state based on its tipping point index, it comes out to about 6 percent, less than the 9 percent Hispanic turnout throughout the country as a whole. That means a Hispanic voter is somewhat less likely to swing the Electoral College outcome than if they were evenly distributed (as a share of the population) throughout all 50 states.